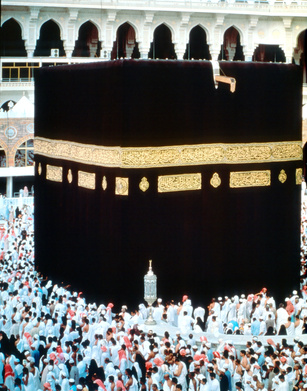 Being appreciative of what we take for granted, spending time with family and friends, and sharing huge meals. That’s how Thanksgiving is usually celebrated by Americans every year.

But what made this year’s Thanksgiving Day different for American Muslims, is that November 26th was the Day of Arafah – the ninth day of the Islamic month Dhul-Hijjah (Month of Hajj) and one of the best days of the year in Islam. Because the Islamic calendar is lunar, the day began 10 days earlier than last year.

On this day, two to three million Muslims from around the world stood in worship on Mount Arafah as part of the five-day Hajj pilgrimage to Islam’s holiest city, Makkah, and nearby holy sites. The pilgrimage is one of five pillars in Islam and obligatory for every Muslim who can afford it. It is also significant because Muslims believe that if the pilgrimage is completed with sincerity, God will forgive all past sins.

Wafiq Fannoun, the executive director of the Islamic University of Minnesota, made the pilgrimage in 2000. He said staying on Mount Arafah for two hours during the pilgrimage was the best experience of his life.

“We read the Quran and prayed … I looked at what happened [throughout] all my life and [I remembered the] people who were good to me and those I forgot to help and the people I had wronged,” Fannoun said. “That time gives us the chance to think and reflect about family, loved ones, and humanity. That day you wouldn’t find a person who didn’t cry from the spiritual experience.”

During the pilgrimage, Muslims also circle the Ka’bah, the large cube-shaped structure covered in black and gold silk that stands in the Masjid Al-Haram, or the Grand Mosque of Makkah. Muslims believe the Ka’bah was built by the Prophet Ibrahim (Abraham) and his son Ismail (Ishmael).

Saidi made the pilgrimage from Minnesota in 2004. It was his first time to see the Ka’bah.

“It was a lot bigger than I had imagined it,” he said. “It had the wow factor, and it really felt like a dream I had been waiting to see for so long.”

He said before he left Minnesota he had compiled a list of prayers to make and people to pray for.

“The hope is that your duaa (supplications) will be accepted there,” he said. “We were a drop in the ocean of humanity but we felt significant in the sight of Allah because He could hear and grant our prayers.”

There is a common misunderstanding that Muslims circulate the Ka’bah to worship it, Saidi said.

“The cube is to give Muslims unity and guidance in their prayer, not to worship it,” he said.

Diversity of the crowds

Both Fannoun and Saidi said the cultural and racial diversity struck them the most during the pilgrimage.

“Everyone from every corner of the world goes there and they’re all brothers and sisters. They pray and eat side by side,” Saidi said. “Even Malcolm X, who went there with nationalistic ideas, said he ate with the whitest of the white and the blondest of the blonde from the same platter as if they were brothers from the same place.”

“All human beings are equal regardless of where they came from and their social, economic, or political status,” Fannoun said. “They’re all wearing the same clothes and maybe a janitor is standing next to a professor and they don’t know. You can’t tell who is rich from who is poor.”

Fannoun added the sheer number of pilgrims he could see at Makkah also awed him.

“It was 4 a.m. – time for the morning prayer. I stood in my hotel room overlooking the [Masjid al] Haram and I saw one million human beings,” he said. “I thought ‘Who would come in the early dawn responding to prayer, the young and old, men and women from every corner of the earth, and they all gather to say Allahu akbar?’… It was an awesome feeling. It’s an experience you live, and it’s hard to translate it to words.”

Before staying at Mount Arafah, pilgrims go to Mina, which is known as the Tent City because they stay overnight in small, air-conditioned tents. Each person is provided with a 2.5-by-6-foot mattress, but nothing else, Fannoun said.

“You give up all material conveniences and you are stripped from your status for a couple of days to be a basic human being,” he said.

The lack of comfort wasn’t troublesome to Fannoun; he said it actually helped him to reflect harder on the four decades he had lived and the decades he still had left.

“Some people call the 40s a midlife crisis. In Islam, we call it the age of wisdom,” he said. “You’re in a midlife crisis if you’re coming from a materialistic perspective, but if you’re looking at it from a spiritual perspective, knowing this life is limited and that we’re put on this earth for a certain period of time is not a midlife crisis … You try to use the time you have left to do better in the future.”

Concluding the pilgrimage and the significance of Prophet Abraham’s Sacrifice

After Mina and Mount Arafah, the pilgrims go to Muzdalifah, which is a small area to gather pebbles for the ritual of stoning the devil. The ritual takes place back at Mina. Pilgrims throw their pebbles at three walls on three separate days. The three represent the devil and his attempt to persuade the Prophet Ibrahim (Abraham), his wife Hajir (Hagar), and his son Ismail (Ishmael) to disobey God’s command to sacrifice Ismail.

The story of the sacrifice in Islam is somewhat similar to that of the Bible. Muslims believe that Allah ordered the sacrifice of Ismail as a fulfillment of the statement Ibrahim had previously made that he would sacrifice his son for God’s sake.

Thus, when God ordered father to sacrifice son, He was testing the strength of faith of both. As Ibrahim painfully but obediently prepared to follow God’s command, Muslims believe Allah sent a goat to be sacrificed in Ismail’s place.

After the pilgrims throw their pebbles on the last day of the pilgrimage, which is marked by the celebration called Eid Al-Adha, they return to Makkah to circle the Ka’bah seven times and walk back and forth between Mounts Safa and Marwa seven times. This part of the pilgrimage is a reenactment of when Hajir ran between the two mountains in her frantic search for water when her son was an infant.

After her search, Muslims believe an angel struck the ground with his heel (or the tip of his wing), to reveal a holy spring called Zemzem. The holy water flows through special taps throughout the entire mosque, and the geographic source of it is unknown.

The pilgrims on this day also cut or shave their hair, and they repeat the stoning ritual the next two days. They also sacrifice a sheep as a reenactment of Ibrahim’s sacrifice and the meat is donated to feed the poor.

Those who cannot make the Hajj pilgrimage devote the Day of Arafah and the eight days before it to fasting from dawn to sunset, giving in charity, helping others, increasing worship and giving thanks to Allah. Muslims need to do this every day, but the Quran mentions those days to be blessed and important in Islam.

The day after is Eid Al-Adha, or the Festival of Sacrifice, which marks the day pilgrims end their pilgrimage. Eid Al-Adha was on November 27 this year. It’s one of the two major Islamic holidays, the other being Eid ul-Fitr (the Festival of Breaking Fast), which is celebrated at the end of the holy month of Ramadan. On this day, as pilgrims in Makkah sacrifice a sheep, Muslims worldwide do the same.

Besides being grateful to God and celebrating the holiday with loved ones, the most important aspect of Eid is remembering the sacrifice, hence the name “the Festival of Sacrifice.” The holiday is a symbol of giving up something important to us and commemorating a painful ordeal one our most beloved prophets had to face.

“There are so many lessons of those days,” Saidi said. “It reminds us that we’re being tested, that you need to be good to people. It reminds us to help the needy and of the sinful nature of humanity and the loving nature of God.”

Eid day begins with a morning congregational prayer. Before the prayer, a donation called the zakat is given which the mosque distributes to the poor. Usually, the Eid prayer takes place at a large venue where Muslims from the entire city throng to meet each other and celebrate.

In the Twin Cities, the prayer is usually held at the State Fair, the Minneapolis Convention Center, or other large venues to accommodate the crowds of people.  Some estimates say the number of Minnesota’s Muslims is as high as 150,000, with most of that population being in the Twin Cities. After the prayer, the rest of day is celebrated by enjoying extravagant meals, going shopping and exchanging gifts with family and friends.