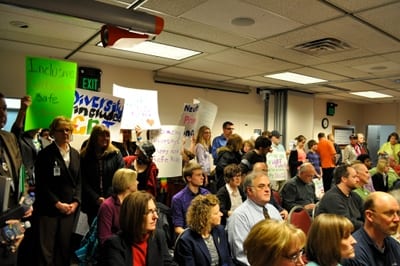 “We were a model for the nation in protecting kids from classroom homosexual propaganda,” said Lori Thompson, a parent in the Anoka-Hennepin School District. Thompson made her remarks at the district’s school board meeting where the board is considering scrapping a policy that prohibits discussion of LGBT issues in most situations, and replacing it with a policy that limits teachers ability to discuss controversial issues. Anti-gay activists came out in force, including an “ex-lesbian”, to protest the move while members of the community supportive of LGBT students were concerned that those students might be labelled “controversial” by the new policy.

The Sexual Orientation Curriculum Policy (SOCP) says that LGBT issues are to not be discussed in schools and are better left to parents, churches and community groups. The board is proposing to eliminate that policy and replace it with a policy that limits how teachers teach controversial subjects and prohibits teachers from engaging in advocacy.

The Anoka-Hennepin School District has long been a target of social conservatives who have tried to get conservative Christian beliefs taught in the district’s schools. In the 1980s and 1990s, they focused on creationism, the teaching that God created the heavens and the Earth. Over the last 15 years, they’ve targeted any mentions of LGBT issues.

Barb Anderson has taken the lead on opposing an LGBT-inclusive climate in the district. She’s a researcher for the Minnesota Family Council, an affiliate of the SPLC-certified hate group, the Family Research Council, and a leader in the Parents Action League, a group set up to oppose LGBT issues in the district.

She spoke at Monday night’s board meeting.

“Without the SOCP, we will see more homosexual propaganda flooding the classroom,” she said. “There is no other group that continually seeks to force their way into the school curriculum in every subject matter and every grade level to normalize their unhealthy and unnatural behavior. Gay activists describe this in their own words as ‘queering the curriculum,’ going subject by subject, grade by grade to include materials from sexually radical gay activist organizations like GLSEN.”

Anderson’s words were much more muted at Monday night’s meeting than they have been in the past. Late last year, as the issue of bullying in relation to the SOCP was simmering, Anderson appeared on the radio program of Americans for the Truth About Homosexuality, an organization the Southern Poverty Law Center calls a hate group, and blamed LGBT groups for the bullying of LGBT students.

“That is one of the tactics that they are using now, to say that by not legitimizing and normalizing homosexuality, we are creating an atmosphere in the schools that is hostile to quote-end-quote gay kids,” she said. “What they are doing is just the opposite themselves. They are creating an environment where these children that are sexually confused suddenly become affirmed as a homosexual or that they are born that way, and then these kids are locked into a lifestyle with their choices limited, and many times this can be disastrous to them as they get into the behavior which leads to disease and death in some cases.”

She added, “So, it’s really… They are the ones that are contributing to an atmosphere that can even increase bullying as more kids get into this kind of a lifestyle.”

Anderson also brought he friends to testify at Monday night’s board meeting. Janet Boynes is the president of her own ex-gay ministry, and Anderson is the vice president. Boynes has a close relationship with Michele Bachmann and her husband Marcus.

Boynes gave her testimony of being an ex-lesbian.

“I do have a ministry here in the Twin Cities to help men and woman come out of homosexuality,” she said. “I believe without a shadow of a doubt that change is possible because I am a living example.”

But, Boynes own testimony in her book, Called Out, demonstrates that she was bisexual. As Wayne Besen of Truth Wins Out, notes:

An unmistakable pattern of bisexuality is a constant throughout much of Boynes’ life. Based on her stated desire for men, it appears her hetero feelings denote a genuine sexual orientation rather than simply a lesbian engaged in situational heterosexual behavior. For example, on page 15 of Called Out, Boynes begins a relationship with a male dealer named Donald, “who provided me with all the attention and drugs that I wanted.”

After the collapse of this unseemly relationship, Boynes began attending Concordia Bible College, where her bisexuality was on full display: “…a girl named Lenna began to catch my eye. I still associated with guys and was attracted to them, but I could feel myself changing.” (p. 16)

Although she claims that she could feel her sexuality shifting, it did not stop Boynes from entering yet another heterosexual relationship with a man named Laurence.

Boynes, who worked as a para-professional in the district, complained that changing the policy would lead to more LGBT discussions in the classroom.

“It saddens me greatly that you are considering tossing out the SOCP and removing the term sexual orientation which is understood to mean lesbian, gay, bisexual and transgender,” she said. “As someone who has lived the lesbian life for 14 years and who has been out of that life for 12, i understand how gay activists will push very hard to normalize homosexuality force everyone to accept their sexual behavior.”

She continued, “I am a former lesbian. Gay advocates often compare this issue to race and say that homosexuality is who they are and that they are born that way. There’s no scientific evidence to prove that. You will never see a former black person or a former white person. I am a former lesbian. There are thousands of us who are former homosexuals have left behind this destructive lifestyle.”

He added, “I can assure you, gay activists will continue to use the curriculum as a means to force an acceptance of this behavior on kids and this school district.”

Lori Thompson, a district parent and a member of Anderson’s Parents Action League, complained that by eliminating the policy prohibiting LGBT issues, the district would be opened up to teaching of homosexuality.

“Each board member who voted in favor of the SOCP needs to remind themselves why the policy was needed and put in place to begin with. This new proposed policy and the title itself now opens up the school curriculum to the topic of sexual orientation,” she said. “This is why the SOCP was put in place in the first place as we saw so much of this coming into the classrooms.”

She continued, “We were a model for the nation in protecting kids from classroom homosexual propaganda.
The gay activists now have it all and the school board will have to deal with the fallout on many levels as you watch how they will weave this topic throughout the curriculum at all grade levels all at the expense of the children. What a shame.”

But it wasn’t only the conservative Christians that spoke out at the meeting.

Jefferson Fietek, who teaches at Anoka Middle School for the Arts, said, “As a teacher I have see firsthand how the policy has created confusion for teachers.”

He said that activists opposed to LGBT people have “used the policy to intimidate teachers, strong arm our school board and contibute to a toxic environment for students and staff.

He asked the board to “remove the policy and not replace it with another.”

Tammy Aaberg, a district parent who last her gay son to suicide in 2010, said, “I was so happy and so proud of our district… Then I read the [controversial topics] policy and my heart starting hurting all over again. Now we are going from neutral to labeling LGBT people as controversial.”

She suggested the board add language to the proposed policy to read, that teachers and staff, “recognize, validate and support all students for who they are as a person as all being people are special.”

She added, “let’s make our schools safer for all students.”

Robin Mavis told the board: “I don’t believe that replacing the policy with another policy is necessary. I think we all know the subject of being gay would fall under the new policy. Our students are not topics and they are not controversial. To treat their identity as controversial is disturbing.”

Melissa Thompson also addressed the board.

The board had its first reading of the policy on Monday, and will likely vote on the issue in late-January.