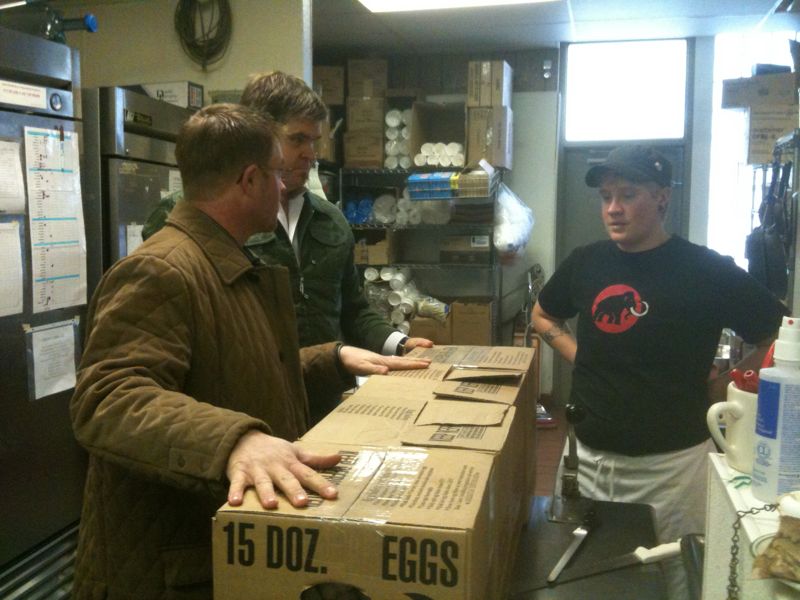 When I saw that the Daily Special scramble at Anodyne Coffeehouse, 43rd and Nicollet Ave. S., was made with eggs from Tangletown Gardens, I got really excited – I like the idea of eating locally, and it doesn’t get a lot more local than this: Tangletown Gardens is just a few blocks away at 54th and Nicollet.

Urban chickens! Not quite. As I was finishing my breakfast, in walked owners Dean Engelmann and Scott Endres delivering big boxes with dozens and dozens of eggs. (Pretty ones, in different colors.) Turns out the chickens don’t live at the Tangletown Gardens store, but rather spend their winters in the heated greenhouse at the Tangletown Gardens farm, 45 miles away near Plato, MN (population 336). (They spend warmer times of the year ranging freely outdoors.)

Their eggs are for sale at the store for $3 a dozen. During the growing season, Tangletown Gardens operates a daily farmers market featuring produce in season from the farm. CSA (community supported agriculture) shares are now on sale for next year’s growing season – an 18 week period from approximately mid-June to mid-October for $500 for a full share, $300 for a half share. That’s an average of 24-30 pounds a week. CSA members also receive invitations to events at the farm, including a Tour de Farm dinner on June 27 and a dinner in August featuring guest chefs from two top Bay Area restaurants: Chez Panisse and Boulevard. Also for sale at the store are old-fashioned pickles and jams made from Tangletown Gardens Farm produce by former Swede Hollow Cafe owner Sandy Younkin.