Deanna StandingCloud, a parent coordinator with the Minneapolis Public Schools, said that getting parents involved at Anishinabe Academy, a school focused on using Native language and culture to support academics, can be tough. Sometimes, parents ask not to meet at the school, due to mistrust of schools and institutions in general. “There’s not a sense that the school belongs to us,” she said. That’s in addition to other factors such as parents being really busy, and other issues like transportation.

The distrust of schools, and perhaps the feeling that traditional school settings don’t understand or value the unique identity of Native students are reasons some parents choose to send their children to Anishinabe Academy.

Among the many atrocities inflicted on American Indian people in the United States, perhaps one of the most devastating is the role of Christianity and religion in the missionary work and boarding schools that sought to destroy Native culture. Historical texts and oral histories tell us gruesome stories of how children were ripped from their homes, and forced to give up their traditional values, language and beliefs.

Though boarding schools, thankfully, are a thing of the past (at least in Minnesota), many American Indian social workers and academics talk about the role of historical trauma in creating societal problems even generations after the abuses occurred.

StandingCloud herself has two kids who attend the school — one in eighth grade and one who attends High Five, a new all-day Pre-K program using Ojibwe and Dakota language immersion. StandingCloud is from the Red Lake Indian Reservation, and she feels privileged to grow up steeped in her culture. At Anishinabe, she said, “it’s exciting that my beliefs and culture are the main stream.”

As a parent StandingCloud tries to teach her children about certain cultural traditions, but she’s glad they are in a place where Native American history is taught. “The staff is very supportive of culture in the classroom,” she said. She does wish, however, that more Native language was taught in the school.  While her younger child is in the High Five program, which is an all day immersion program, the older grades do not have specific languages courses. Rather, the teachers are expected to use Native words and phrases throughout the curriculum. 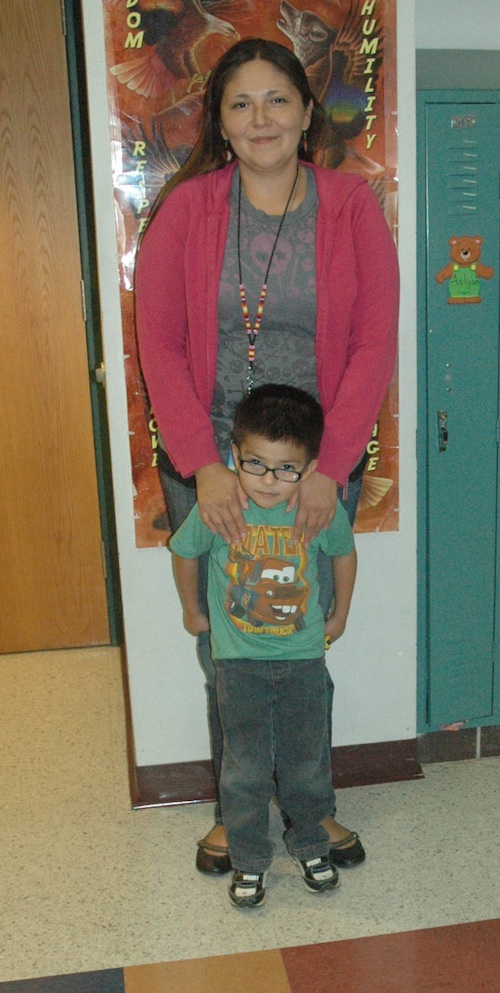 Nichelle Wynde, another parent, who also works as a parent engagement specialist, has two children who attend the school. She first sent her kids to Lyndale, where they had a difficult time because they felt the teacher was mean, so she transferred them to Anishinabe. Wynde said her older son now likes his teacher.  She likes that the kindergarten program is all day, and that her child is learning the language. His social skills are improving.  “It’s a huge part of their identity to know the traditions.  It helps with self esteem and confidence,” she said. She hopes that her children are able to build confidence and self worth through language and culture.

Anishinabe Academy opened during the 2003-2004 school year, after the closure of Four Winds Academy, which had opened in 1991. Unlike Four Winds, Anishinabe never had to contend with state integration laws, which were done away with in the late 1990s in favor of parent choice policies. According to the Minnesota Department of Education, Anishinabe is currently 90 percent American Indian, 1 percent Asian, 4 percent Hispanic, 2 percent Black and 3 percent white, and 95 percent of the students are on free and reduced lunch. 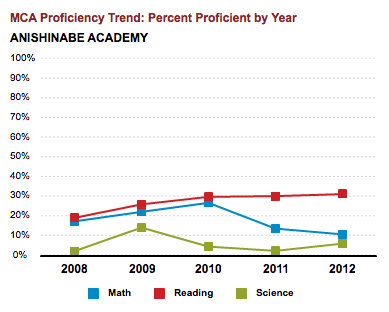 In a recent interview, Karen Wells, the school’s vice principal, spoke of some of the new initiatives the school has taken on to improve academic performance, while at the same time keeping the Native language and cultural focus of the school.

“We’re looking at the data in a different way,” she said. Based on data we look at, the focus is on particular things.” The school has targeted attendance as an important piece to the puzzle.

While the school takes steps to improve the academic performance of the students, Anne Lewerenz, a Teacher on Special Assignment at the school, contends that perhaps the problem lies in the tests themselves. “We have to be careful about assessment tools,” she said. “They can be biased.”

Last year, Anishinabe was affected by a new a new Memorandum of Agreement (read about it here in Steve Brandt’s article in the Star Tribune), updated from the one created in 2006  between the district and the Minnesota Urban Indian Directors (MUID) to improve the academic performance of American Indian students in Minneapolis. Last year’s MOA included additional professional development to guide teachers to integrate culture into their classrooms.

“There is a focus on academic rigor,” said Lewerenz. The instructional model the school has adopted “provides instruction from where each student is at.”  The Reader’s Workshop model they use involves a teacher doing a mini-lesson, followed by asking questions, then a guided reading group, she said.

In addition, the school has embarked on a partnership with the University of Minnesota, aimed at honing in on best practices to improve student performance through a culturally based model. “When kids are taught in Native languages, they have higher achievement,” Wells said. The partnership includes observations and coaching for the teachers in the school.

Ida Downwind, from Leech Lake Band of Ojibwe is a program facilitator for the school district’s Department of Indian Education, on special assignment at Anishinabe.  She has worked with the University of Minnesota on instructional practices.  “It’s not just about being a good teacher,” she said. For her, it’s important that teachers infuse the cultural elements, language, and the historical perspective for Native students.

The partnership is in its fourth year. “Last year was so effective,’ she said. “We hope to continue this partnership.” You can read more about the partnership in this article in the University of Minnesota’s Connect Magazine.

Other recent efforts that the school has embarked on have included a campaign to raise attendance, as well as partnering with Anne Sullivan Elementary (housed in the same building) for after school programs, band and sports. Anishinabe Academy is also a participant in Connecting Parents to Educational Opportunities (CPEO) which gives opportunities for scholarships based on parent involvement.

For another article about Indian education in Minnesota, see Minnesota Director of American Indian Education Dennis Olson on Native students and the achievement gap