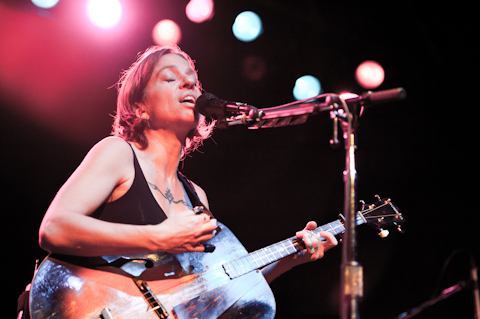 Surprising my wife with an Ani DiFranco ticket made me the sexiest man in the world. Finally, for one glorious night, Christian Bale and Joseph Gordon-Levitt could lick my boots.

Ani DiFranco landed in Minneapolis, September 23rd and played to a wide-eyed and fawning crowd spread across most horizontal surfaces in First Avenue. With 23 years of relentless touring over her 17-album career, the audience, full of diehards, was primed.

Many of them, I’m sure, were like me and discovered DiFranco through one of her releases from the mid- to late-90s. For those she was at her height, knocking out nearly an album a year, each loaded with feminist wit and deft finger picking, each a portrait of a woman staking claim to a righteous babeness.

The female-heavy crowd sang along to favorites like “32 Flavors,” “Napoleon,” and “Dilate,” which all came from that charmed period when she moved product and showered with the praise of industry critics. Backed by a two-man rhythm section, DiFranco picked through her set with every bit of staccato and folk-preciseness she’s known for. It comes off as more improvisational and in-the-moment than rote, calculated, or factory-pressed.

She felt wholly present at First Avenue, like the performance was a conversational communion with her fans. There was no invisible wall that separates other audiences from their beloved performers. A few songs into the set, the crowd sang DiFranco, who turned 42 that day, “Happy Birthday,” with all the gusto I might expect if I were a beloved idol.

But as I said, it’s certainly deserved. DiFranco’s dedicated much of her music to the radical notion that women are people—powerful people that aren’t going to take it anymore.

DiFranco’s music was an important portal into feminism for my wife, many of my female friends, and for male me. At that high point of her career, when she crafted albums that rocked many of us, DiFranco was chronicling her self discovery. She rolled through her 20s with all the bravery and am-I-taking-crazy-pills frustration most young people struggle to articulate, let alone loudly profess.

This string of dates for DiFranco is in support of her latest, Which Side Are You On? The album’s title track is a variation on the union song Pete Seegar popularized, featuring DiFranco’s updated lyrics and Seegar on banjo. Critic and DiFranco-phile Robert Christgau hailed the album as a return to her pre-2000 form. I’m not so sure.

DiFranco opened her set with “Which Side Are You On?” and though it had others tapping their toes and cheering, to me something felt wrong. On stage, DiFranco smiled wide and bounced as she strummed and sang, “Feminism ain’t about women/No, that’s not who it is for/It’s about a shifting consciousness/that’ll bring an end to war.”

I listened and thought about all the outrages I ramble about to my wife, to my friends, to anyone on Facebook who will listen, when I realized the dissonance: Ani seemed happy up there. For me, “Which Side Are You On?” has always been a fed-up-with-it rally—particularly in the fall-out of my home state’s battle over collective bargaining. In this election year scrum, why wouldn’t she sound like Tom Morello on the Wisconsin Capitol steps? Heck, why wouldn’t she sound like righteous Ani, particularly when belting it out live?

“Which Side Are You On?” was the largest hiccup in an otherwise fine performance from the road-tested veteran to the audience that sang and sang along. I remember, because I was, too.

But this is the treacherous road young, autobiographical musicians face as they age. How can they replicate the confusion, frustration, and abandon in those songs, the ones that made the diehards fall in love all those years ago? Or is that the whole problem—that when performing those old songs the performer has to replicate those emotions?

One song captured this struggle well.

“Promiscuity,” a track from the new record, which came early on in the First Avenue set, has some hallmarks of a track from her height. In it, DiFranco marches with the feminists and sex-positivists fighting slut shaming and the minds that think up things like “legitimate rape.” “Promiscuity is nothing more than traveling/There’s more than one way to see the world/And some of us like to stick close to home/And some of us are Columbus.” Though these aren’t the strongest lines she’s penned, DiFranco’s tapped into a timely issue and flipped its classic gender roles. The First Avenue audience hung on each line.

But, remember, DiFranco’s evolved. Later in “Promiscuity,” after she admits to being finally taken with monogamy and honesty, this: “And honestly, I myself just started/And eureka, I’m less broken hearted.”

Hearing that while my wife held her curled arm around my back, shucked any frustration I had with DiFranco’s tone or affect. I thought, “You know what? Good for you, Ani. Just hit a couple more from Pretty Girl and Dilate and we’ll call it even.”

Just two songs later, she went back even further than I’d asked, all the way to 1991, for “The Whole Night.” DiFranco said fans had been requesting it for 15 years and so right there at First Avenue she’d play it. And she did, with all the confusion and wonder of a 21-year-old finally staying the whole night with another woman, whose fingers she thinks of when she walks.

DiFranco smiled at the audience and explained her decision to finally play it, saying to herself, “Don’t be an asshole, Ani.”

The Pearl and the Beard