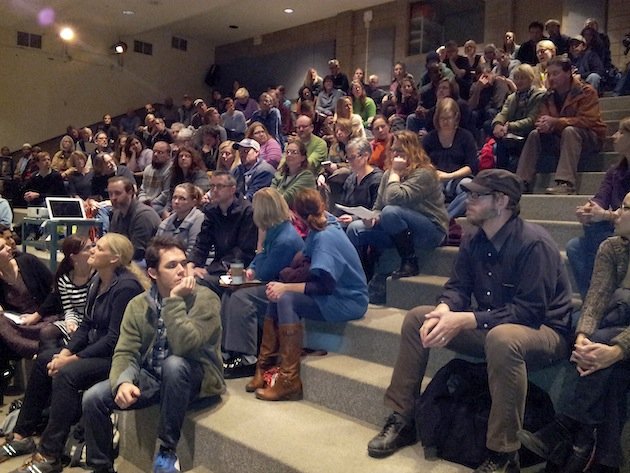 With less than one day’s notice — and that notice not sent to parents but posted on the Marcy Open School website — nearly 200 Marcy Open School parents packed the school’s theater on Wednesday, November 6, angrily confronting Minneapolis School District Associate Superintendent Michael Thomas, and opposing the last-minute plan to move Marcy.

UPDATE 11/9/2012: The Marcy Open School program will not be moving to a new building for the 2014-2015 school year, according to a letter posted on the Marcy website on Friday, November 8, by Minneapolis Public Schools Associate Superintendent Michael Thomas. Full story here.

A letter posted by the district on Marcy’s website on Tuesday, November 5, informed Marcy parents that the district had revised its Five-Year Enrollment Plan, and would now be recommending that the Marcy program move, intact, to the Sheridan school building, approximately one mile away, on Broadway Avenue.

Thomas began the meeting by briefly explaining how the district came up with the idea to move Marcy. He also apologized for the lack of notice given to the community about the night’s meeting.

Admitting that the meeting was the “first time we’re having real dialogue with the Marcy community” about the proposed building change, Thomas said he had received numerous phone calls and emails from Marcy families since announcing the new recommendation. These families turned out in force, and the anger, frustration, and confusion they expressed was unmistakable.

Thomas tried to walk people through the district’s thought process surrounding this decision, saying that the option of moving Marcy came from conversations with downtown Minneapolis residents who have asked the district to carve out a clear school pathway for the many young families now living in downtown neighborhoods. Thomas also referenced the over-arching theme of the Five-Year plan, which concerns what he called the “good challenge” of growing enrollment within the district, and the need to reduce class sizes at overcrowded schools like Marcy.

When the floor was opened up for questions, many in the crowd immediately let Thomas know that, from their point of view, moving the Marcy program was not an acceptable solution for the district’s problems. One parent spoke up and said she felt “brand new to this conversation,” and was “really concerned about Marcy’s inclusion” in the district’s decision-making process. In response, Thomas maintained that the idea had been vetted, to which the crowd reacted angrily, saying, “Who was involved in these thought-processes? Who? Tell us!”

Additionally, when Thomas reiterated the idea that the newly created “1G” attendance area, which includes the North Loop area of downtown Minneapolis, was “interested in Marcy as their community school,” the crowd again reacted strongly, shouting “No!” and calling out the point that, “We see this as our community school.”

Thomas maintained his composure and assured the crowd that he would take the community’s response forward to the powers that be. He also mentioned that he “could have chosen not to have this meeting” at all, and could have just presented the recommendation at the November 12 school board meeting, where the district will be updating the school board on the status of its Five-Year plan. This brought another loud protest from the crowd.

Many wanted Thomas to know how special the Marcy building is to them, to the neighborhood, and to the program itself. Jackie Decker-Travis, for example, spoke with palpable anger and emotion about the newly created labyrinth on the grounds of the school. This labyrinth, she said, was initiated by Marcy students, and paid for by the classrooms, the Marcy Open community, and the Marcy-Holmes neighborhood; it would be impossible, she said, to just pick up the program and move.

Others in attendance referenced the importance of Marcy’s location, saying the close proximity to the Mississippi, the University of Minnesota, and the “urban forest” of the Marcy-Holmes neighborhood was valuable. Some expressed fear that, if the program moves, the built-in community support will be lost.

One woman also wanted Thomas to know that, from her perspective, the Minneapolis Public Schools has a history of “making problems happen” by “ping ponging programs,” moving students, and closing schools. Speaking with a clearly upset voice, she said that is “unacceptable,” and that, “These are our schools.” A Marcy student in the crowd got a standing ovation when she spoke up in defense of her school.

As the meeting ended, Thomas said he would make sure the Marcy community knows, before the November 12 school board meeting, what his recommendations for the program and building are. Saying “Your voice matters to me,” Thomas ended the meeting, but stayed around a bit longer to listen further to the questions and comments from the Marcy community.

The November 12 school board meeting will include the latest revisions to the district’s Five-Year Enrollment Plan. The district will then present its final recommendations at the school board’s December 10 meeting.

Storify below  has video from meeting and live-tweet stream.