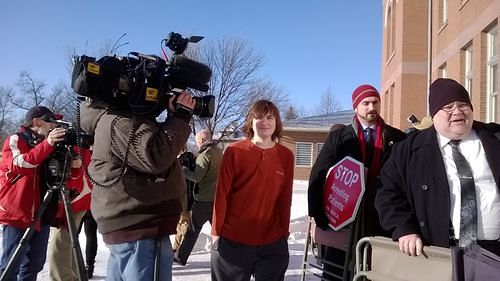 Madison, Minnesota bills itself as the “Lutefisk Capitol of the USA,” complete with a statue of a giant codfish that may be as digestable as the Norwegian Christmas delicacy.

Also not going down easily? The charges against 38-year-old married mom of four Angela Brown, who is accused of child endangerment for administering medical cannabis oil to her son Trey, who lives with traumatic brain injury. She obtained the oil legally in Colorado, but was charged with a crime in Minnesota after her son’s improved spirits were noticed in his school. Brown was in court yesterday for an omnibus hearing in which her attorney presented a brief and an oral argument on a motion to dismiss, along with over 20 people from as far away as Michigan who braved ice-covered roads in Lac Qui Parle County to peaceably protest the case.

The supporters were joined by a gaggle of electronic and print media following the high-profile case, all of whom adjourned to The Pantry for a press conference and a little lunch.

Call it The Emperor Wears No Clothes meets Lake Wobegon. Here’s a digest of coverage from near and far. “How is endangering your child taking his pain away?’’ said Brown. “If someone answers that for me, fine, charge me, but until someone can explain to me how preventing pain is wrong, then I will continue to plead not guilty.’’

Lac qui Parle County filed two gross misdemeanor charges in June of endangering a child — permitting to be present when possessing a controlled substance and contribute to the need for child protection or services. The charges came after Brown had been asked at the Lac qui Parle Valley Schools what she was doing differently to account for her son’s improved performance. . . .

In court, her attorney told Judge Thomas Van Hon that the child endangerment charge leveled against his client is intended for situations involving serious drug offenses, such as the sale of drugs or manufacture of methamphetamine in the presence of children. He told the court there is no probable cause for the charge here: “You can’t find a sale,’’ Hughes said.

This was a mother-to-son relationship, and not an attempt to develop a customer, Hughes told the court. He also pointed out that she possessed only a small quantity of cannabis oil, and not enough to meet the threshold for the severe drug offenses intended in the child endangerment statute.

Hughes also filed a motion seeking to dismiss the child endangerment charge in the “interest of justice.’’ He pointed out that Minnesota will allow the medical use of cannabis in July. He said there is “ample” evidence showing that Trey will qualify as a registered patient under Minnesota’s medical cannabis law.

“In my opinion it is science fiction to claim cannabis has no medical use in the United States,’’ Hughes told the court. He pointed out that 33 states now have laws allowing its medical use. . . .

Read the entire article and watch the raw footage of the press conference at the Tribune.

. . . Brown was greeted at the courthouse by several protesters supporting her decision to help her son. The protesters submitted a petition to the county with roughly 9,000 signatures pleading that the charges be dropped. The Browns are open to moving to Colorado where medical cannabis is currently legal and requirements for patients to qualify for the medicine are much less restrictive than those coming into effect in Minnesota next July. “We really just want to get in a state where it’s okay to take care of him (Trey),” said Brown. She added her husband David is already applying for jobs in Colorado.

Lac qui Parle County has until Jan. 2 to respond to Hughes’ motions. “I am just ready for it all to be over with,” said Brown.

. . .Trey was with her in the courtroom, and the 15-year-old smiled shyly at the banks of cameras and reporters who turned out for a case that has drawn national and international attention. Before he tried the cannabis oil, his mother said, the muscle spasms from his traumatic brain injury would leave him curled in a fetal position or in so much pain he would punch the walls or hit himself hard enough to break his nose and crack his collarbone. The improvement after he tried the marijuana tincture — which the family bought legally from a dispensary in Colorado — was dramatic, his mother said.

“This simply is not a situation where someone has endangered their child,” said Hughes, an attorney from Oregon who volunteered to defend Brown. The statute, he said, was meant to protect children found in meth houses, not a child swallowing drops of cannabis oil to help with the seizures and pain he has suffered since being hit by a baseball line drive three years ago.

Update: Brown commented on Bluestem’s editor’s personal Facebook post that “the oil was given to us” rather than purchased. Other sources (though not Bluestem’s original copy) have reported that she is a mother of three; as we correctly note above, she is the mother of four children.[end update]

Finally, as we move up the channels, John Croman reports in Minn. mom asks judge to toss medical marijuana case:

Brown’s defense attorney, Michael Hughes, moved for dismissal, telling District Judge Thomas Van Horn that the circumstances of the case don’t match the statute being cited by prosecutors. Hughes said that law was designed to hold drug dealers accountable for selling drugs where children are present.

“When you have a child endangerment charge that’s leveled against a mom who actually is helping her child, that’s the absurdity of this whole thing,” Hughes told reporters afterward.

“Six months from now her son could be a registered patient in Minnesota, and yet she’s being charged with and threatened to be prosecuted and convicted of child endangerment.”

View the video at the link.

Middle top: Angela Brown supporters in front of the Lac Qui Parle Courthouse on Wednesday. The temperature was in the low teens.

Middle bottom: Descending the stairs from the third floor courtroom with her husband David, Brown joked that she felt she should wave–then did. Later, Brown said she just wanted to go home.

Bottom: Brown gets a microphone clipped on her before the press conference at the Pantry Cafe in Madison, the Lutefisk Cafe. Friends among her supporters recommend the hot beef commercial.