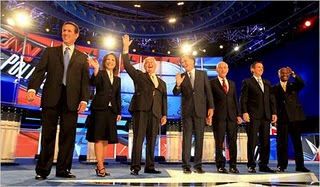 Who won the debate last night? Bachmann and Romney emerged as winners in very odd ways. Bachmann won but not really on substance. She won by her announcement that she was officially running for president. Her announcement was brilliant in the sense that she knew it would be the major news or headline item the next day. Yet again with this announcement she proved her ability to capture headlines and to shine the spotlight on her. Thus, Bachmann wins the public relations battle.

Romney was also a winner. The expectation was that the other candidates would go after the frontrunner and smear him with the phrase Obamacare. They failed to do so. Even Tim Pawlenty, who just a couple of days earlier had attacked Romney for creating Obaneycare, shrank for doing it. Because Romney held his own, did not suffer an attacks, and also managed to attack Obama himself, he appeared to escape the debate without scars and therefore won.

Beyond the Bachmann announcement and the failure of the field to attack Romney, there were no surprises in the debate. All of them attacked Obama and all of them more or less said the said thing when pressed on the economy, health care, abortion, and gay rights. What was most striking was how little they really disagreed, with all concurring that any of them would be better presidents than Obama.

But even more striking was how bland all were and how little they had to really offer as president.

They were all strong in their criticism of Obama and the government but offered little in terms of real solutions. They all said the problems in the economy and the world were rooted in too much government and taxes, contending that by cutting both the private sector would solve our problems.

Government thus crowds out real private sector innovation. Paul was most clear in arguing this. But beyond saying government was bad they offered little in terms of what government could do or why they wanted to be president. Instead, they all seem to be running for a job they want to eliminate.

Pawlenty was interesting. It was a tale of Two Pawlentys. There was the governor of Minnesota who liked to describe himself as a moderate. Now it is a Pawlenty who took pride in passing pro-life laws, packing the court with pro-life judges, and a candidate against law rights and any type of government action. Who is the real Pawlenty?

With her formal declaration that now means her congressional seat is up for grabs. All along it seemed clear that November, 2010 was the last time she would run for the House of Representatives. At that time it looked like redistricting or a run for the senate would be next for her, not the presidency. Nonetheless, Bachmann’s seat is open and that should begin a scramble for it.

Moreover, think about her poor constituents. From the day she was sworn in this January Bachmann has been effectively running for president. She will now continue to do that leaving her district without any real representation.

At the debate Bachmann held her own and looked and sounded like the rest of the field. She turned away comments about her extremism and association with the TEA party may hurt her. She did a good job in sounding as bland as the rest.

Also, if Bachmann does not succeed in her presidential bid, running for president does not hurt her marketability or chances to challenge Franken in 2014.