Junauda Petrus had been living in New York when she was initially inspired to begin the creative process of writing and developing the concept for the gripping play entitled There Are Other Worlds. Her original idea for the performance, which sold out each night of its four-night run, was a little different than the work which was presented at the Open Eye Figure Theatre in Minneapolis April 25-28, 2013. 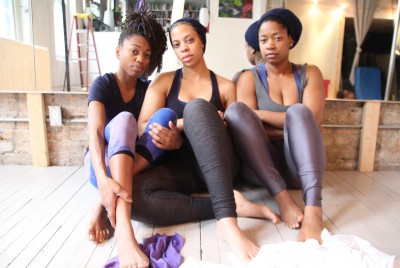 At first Petrus just “wanted to do an aerial performance piece featuring all Black women” and combine those elements with “poetry vignettes,” and was inspired by Ntozake Shange’s For Colored Girls Who Have Considered Suicide When the Rainbow is Enuf. But during the creative process, the concept eventually transformed into a powerful and poignant story that touched on a number of topics considered taboo, such as the treatment of Black women, rape, murder, and the prison industrial complex in the United States.

One element of the original concept that remained was the aerial performance, something Petrus wanted to exhibit. She describes aerial performance as “a circus art that deals with hanging apparatuses,” where acrobatic movements are incorporated with the use of materials hung from the ceiling. Petrus started training on the corde lisse, which is French for “smooth rope,” where the performer works with one long rope. She also works with silks, which involves two long pieces of silk, and incorporated both silks and corde lisse into the play.

Petrus’ interest in aerial performance was sparked in 2009 by a chance encounter she had with a woman she noticed while walking to the subway in Brooklyn. Although they never met, Petrus was drawn to her. “It was just something about her. You see tons of people walking to the train every day, and there’s some people you recognize and some people you don’t. But that day there was something about her that stuck out to me, I remember what she had on and everything.”

The woman, Kiebpoli Calnek, noticed Petrus as well, and eventually came up to her and gave her her card. It turned out that she was an aerialist, and was teaching classes on the craft. Intrigued, Petrus started going to the classes to learn corde lisse, and was instantly hooked. Her desire to learn more about the craft led her to investing in training on silks at a circus school in Vermont. 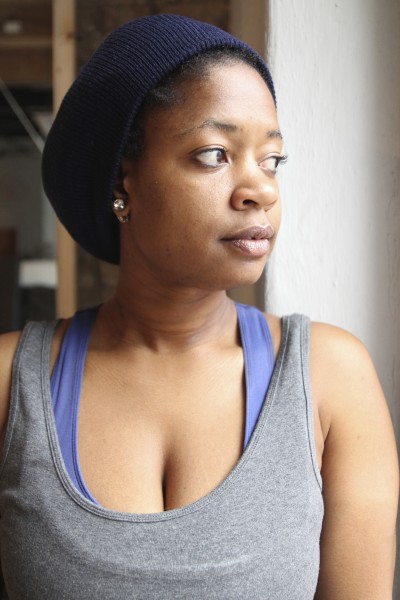 Though she has an extensive background in dance and has been practicing yoga for years, Petrus says learning aerial was physically the hardest thing she has ever done. “[In the beginning] I could do almost nothing… The strength it takes to do aerial is so specific… until your body knows what it’s doing, you end up exhausting all of your energy,” she explains.

The direction the play eventually went was inspired by a book Petrus was reading, called Couldn’t Keep It To Myself, edited by Wally Lamb. “He had been doing these writing classes in a correctional facility in Connecticut. [The book] was all of these short memoir pieces by a variety of women who were locked up. It just floored me, it was so good, it was so amazing… I recognized a lot of women I knew personally within those pages. It wasn’t like [I was saying], ‘Aw, that’s why those women are locked up, because they’re like that!’ It was like dang, that woman could have been me, it could have been my mama, that woman could have been any one of my girlfriends…”

The character for the mother (Amri Akenyemi, played by Nisreen Dawan), who kills her child’s molester and is sent to prison in the play, came to Petrus while reading Couldn’t Keep It To Myself. The other characters are essentially a collage of people and personalities Petrus has encountered throughout life.

“It’s just crazy how life helped flesh out the characters,” Petrus says. “I feel like the relationship between the daughter (Dreamah Akenyemi, played by ShaVunda Horsley) and the friend (Sarya Rice, played by Lameka Mckenzie) certainly speaks to my relations I had with women when I was young[er].” The piece also included vocal contributions from singer Sarah White, and a West African dance piece choreographed by Foxy Gilley.

Junauda Petrus is performing aerial during African Nights 2013, June 7 and 8 (see the Entertainment Spots). Petrus is also currently in talks with various arts organizations and theater houses to present There Are Other Worlds to more audiences in the future. For more information or to get in touch with Junauda Petrus, go to www.freeblackdirt.com or email her at junaudapetrus@gmail.com