An Oversimplification of Her Beauty will be presented on August 14 by Sound Unseen, a monthly screening series held every second Wednesday at Minneapolis’ Trylon Microcinema, located on 3258 Minnehaha Avenue South. The film is part of a doubleheader with showtime starting at 7 pm.

It stars Terence Nance, who also wrote and directed the film, and Namik Minter as a couple in a relationship that swings between platonic and romantic; but in whose mind?

An Oversimplification of Her Beauty is mostly autobiographical: “Yeah, it’s me unfortunately,” admits the Dallas born and raised Nance about the leading male character in his first film. 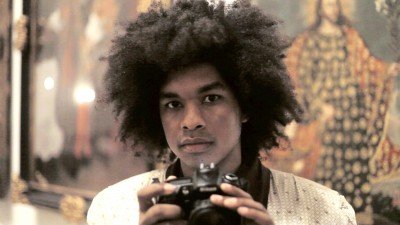 “The easiest part was [being] in front of the camera,” says Nance on his triple role of star/writer/director. The hardest was editing the film, which included animation, he adds. “Not knowing that going in, and learning that all in the process of doing the film definitely was extremely hard.”

Right: Terence (Terence Nance) takes a picture in a scene from Terence Nance’s An Oversimplification of Her Beauty (Courtesy of Variance Films)

Making the film, which premiered in 2012, was a six-year process, says Nance. “I figured what I was doing as fine art. It could’ve gotten done in three years but mine took twice as long because of the added element of [animation],” he points out. “The nature of that is extremely time consuming. I did not know it would take that long — I really didn’t know how long it would take. I thought I could get it done in two or three years.”

Raising the necessary funds to complete the project was also a factor, continues the award-winning filmmaker. “You have to be rational about the amount of resources you have. That doesn’t necessarily mean money; you have yourself and you have whatever talent you have [to work with]. At the end of the day, it was a learning situation. I didn’t know what I was doing, and I was making every mistake one could make. It took forever, but I figured it couldn’t happen any other way — but I’m glad it happened the way it happened. Understanding everything, you have to finish.” 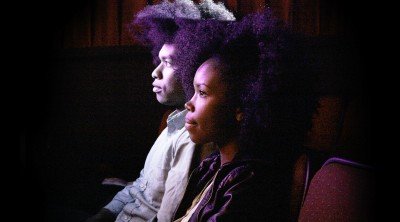 Left: (l-r), Terence Nance as Terence and Namik Minter take in the short film Terence made in a scene from An Oversimplification of Her Beauty. (Photo by Charla Harlowe, courtesy of Variance Films)

Among the film’s executive producers were Jay-Z, Dream Hampton, and Wyatt Cenac.

“I felt extremely privileged to be given the honor to have the first film I ever made make multiple platforms,” says Nance of being honored at Sundance in its New Frontier category, and his film screened at Los Angeles and San Francisco film festivals as well. “It was surreal for me to be able to screen [the film] at one of the biggest [film festivals] in the world.”

Nance says he’s busy working on future projects, but promoting Oversimplification has kept him busy as well. When asked if he will be in the Twin Cities when his film is screened here, the filmmaker offers, “I don’t think I will be but you never know.”

Finally, Nance advises those filmmakers who are starting out to make sure that they seek guidance from “smart people that you trust.”

“I found that the most difficult thing is to have people who have perspective on your work,” he surmises. “It’s really difficult because it is such a subjective thing to evaluate art and film, and especially film. I would also say get a lot of technical perspective to master your craft and master the tools you are going to work with.”