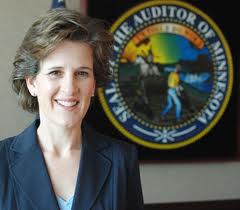 While Matt Entenza’s new television ad highlights his campaign talking point about the need for the state auditor to battle the drive to privatize public pensions, little light has been shone in the media about where incumbent auditor and endorsed DFL candidate Rebecca Otto stands.

Entenza’s take makes it appear that Otto’s quietly competent style allows no room in the debate over private pensions. Is this accurate?

It’s a fair question to ask, especially after Minnesota Public Radio looked at the second of Entenza’s mailers on Friday, and reported in PoliGraph: Entenza’s latest digs against Otto mislead.

The most recent statement that Bluestem found was in the Bemidji Pioneer article by Zach Kayser, 2014 PRIMARY ELECTION: Otto responds to Entenza:

In a Pioneer article Wednesday, Entenza said groups such as the Minnesota Chamber of Commerce want to privatize public employee pensions, and his last big campaign push ahead of the Aug. 12 primary would be his position against privatization.

While Otto agreed with Entenza insofar as there’s been a push to privatize the pensions of public employees, she said the state auditor does not have the authority to decide whether they are privatized or not.

“The Legislature and the Governor at the end of the day decide if there’s going to be privatization,” she said.

So they agree about the issue, but favor different approaches on the part of the state auditor.

Before Entenza: Otto on privatization

That being noted, we looked for campaign material and public statements from the Otto campaign about her take on efforts to change public employees’ retirement benefits from pensions to a defined contribution systems like a 401k.

The Otto Campaign uploaded two YouTube videos in May about protecting public pensions. These videos predate Entenza’s entry into the race about a few weeks later. There’s the May 4, 2014 upload, Protecting Pensions:

Remember what I told you about trust? Well, you see we have these groups, that there’s an all out assault on public pensions across the country. There are groups that are re-invested in Minnesota to continue to attack our public pension systems in Minnesota. You know what they do? They try to create fear and mistrust: “you know, Minnesota is the next Detroit.” That is so far from the truth, I can’t even tell you. So what I want to do as state auditor is to continue to refute the misinformation and garbage that these groups are throwing out that are not true about our state. We have well-managed plans. Everybody got hit in the downturn, it just happened. But we had the earliest reforms. We watch our plans, they’re dynamic, so I want to continue to do that work, so that people can trust that these plans are well-managed.

On May 14, 2014, the campaign uploaded another informal YouTube, On Public Pensions. This version is embedded on her website.

After Entenza: responding to the CAE report by name

The text on the Otto website delves into the nature of (and sourcing for) those attacks she mentioned in May.:

There is an all-out assault on public pensions. Lobbyists for the 401(k) industry such as the American Legislative Exchange Council (ALEC), Minnesota’s Center of the American Experiment, and the The Laura and John Arnold foundation have been working to spread disinformation in Minnesota and elsewhere that there is a crisis in public pensions, so they can erode trust in government. The goal is to move public employees to riskier and more expensive 401(k)-style plans that are failing so many employees who work in the private sector. Common tactics are to claim that Minnesota is going to be the next Detroit and that taxpayers are on the hook for public pension costs, or that pension benefits are excessive.

Minnesota has been prudent and disciplined about managing its public pensions and has a history of addressing funding shortfalls before there is a crisis. Reforms implemented have been through shared sacrifice by employers as well as retired and active employees.

Major ratings agencies such as Moody’s, Fitch and Standard & Poor’s have good things to say about Minnesota’s pension obligations, which would hardly be the case if Minnesota or its major cities were on the verge of a Detroit-style calamity. See the Public Employees Retirement Association (PERA).

Over the past 20 years, deductions from public employees’ paychecks made up about 14% of the three statewide public pension systems’ revenues, and 16% was from employers. The other 70% has been from investment returns. This refutes the claim that taxpayers are on the hook for all of Minnesota’s public pension liability.

The pension plans provide our public employees with a modest retirement income. For example, the average PERA monthly benefit is about $1,300 per month. See PERA.

As a trustee on the PERA board, Rebecca is a strong fiduciary on behalf of the taxpayers and the members of the plan. She works to make sure that the plan is financially sustainable for the long term.

In her 2010 campaign, Otto also discussed the need to preserve well-managed public pensions as part of her online doorknock.

Moveover, MAPE, a public employees’ union, cited her oversight of investments on the board in their December 2013 endorsement. While AFSCME Council 5 declined to endorse in the race, other unions with significant public employee membership–the Teamsters Joint Council (Local 320), SEIU State Council (an education local), and the Minnesota Nurses Association–have endorsed Otto.

Where’s Entenza on this?

Note that Otto addresses the latest CAE report, while a google search of the news produced no hits for the keywords “Matt Entenza” and “Center of the American Experiment.” A search of the broader terms “Matt Entenza” and “pensions” reveals 22 hits on August 1, but Entenza only specifically names those attacking the pension system in an article in Wednesday’s Bemidji Pioneer, Auditor candidate Entenza visits Bemidji; Primary race is only high-profile statewide DFL contest:

Entenza said his campaign’s last big push ahead of the Aug. 12 primary vote would center on public employee pensions. He claimed groups such as the Minnesota Chamber of Commerce and the League of Minnesota Cities are pushing for the state to privatize pensions by changing them from defined benefit pensions to defined contribution pensions, like 401Ks.

“With a defined contribution pension, you have no idea what you’re going to get on the back end (at retirement),” he said. “Your only hope is that you’ve saved so much that if the market roller coaster…hurts you, you might be able to survive it.”

Entenza’s position on pensions exemplifies his approach toward the duties of state auditor, he said.

“We think one of the big differences between myself and the incumbent auditor… her view of the office is…focus on balancing the books and not to look at what she calls ‘policy issues,'” he said. “But I think that it’s essential that in Minnesota — given the fact that we’ve got $80 billion in pension asserts that we manage — that not only do we manage them carefully, but that we avoid the pitfalls of privatization.”

On the Entenza site, the language on the pensions issue page is much more broad about who’s making the attacks:

As Auditor, I will protect the pensions of retired Minnesotans who earned them through decades of honest work in our great state.

When I was growing up in Worthington, I saw firsthand how family members and neighbors depended on their hard earned retirement savings to pay the bills and put food on the table. Too often these days, we hear stories about how folks who worked hard and played by the rules their whole lives have their retirement at risk by poorly managed pension funds and Wall Street middle-men that charge exorbitant fees.

Privatization of pensions is unacceptable.

Minnesotans’ pensions should not be privatized and that Wall-Street middle men have no business near our pension plans. That’s why I believe the Auditor’s office can do much more to make sure that our public pensions are strong and well-managed. As auditor, I will make protecting pensions a top priority by taking a hard look at our state’s pension investments to insure that pensions are not being privatized and that wall-street interests are not fleecing retirement fund. I will be a watchdog over our pensions funds by shedding light on potential abuses so our seniors and future retirees can have confidence that the retirement they earned is their when we need it.

That’s fairly vague in comparison to Otto’s language, and it’s difficult to see what he’s proposing that Otto is not, while she specifically addresses the most public of recent attacks on Minnesota’s system of public pensions.

Much of this fight–one picked by the self-funded Entenza–appears to come down to style. Given that they both favor retaining a system of public pensions, while fightng off privatization, we wonder if it comes down to personality or temperament: the self-promoter versus the “invisible,” those folks who possess The Three Most Important Traits of People Who Make the World Work.

Given the competence that Otto has brought to the job, perhaps someone can make an in-kind contribution to the Matt Entenza campaign of the Invisibles: The Power of Anonymous Work in an Age of Relentless Self-Promotion. For some jobs, it’s not about the job holder.