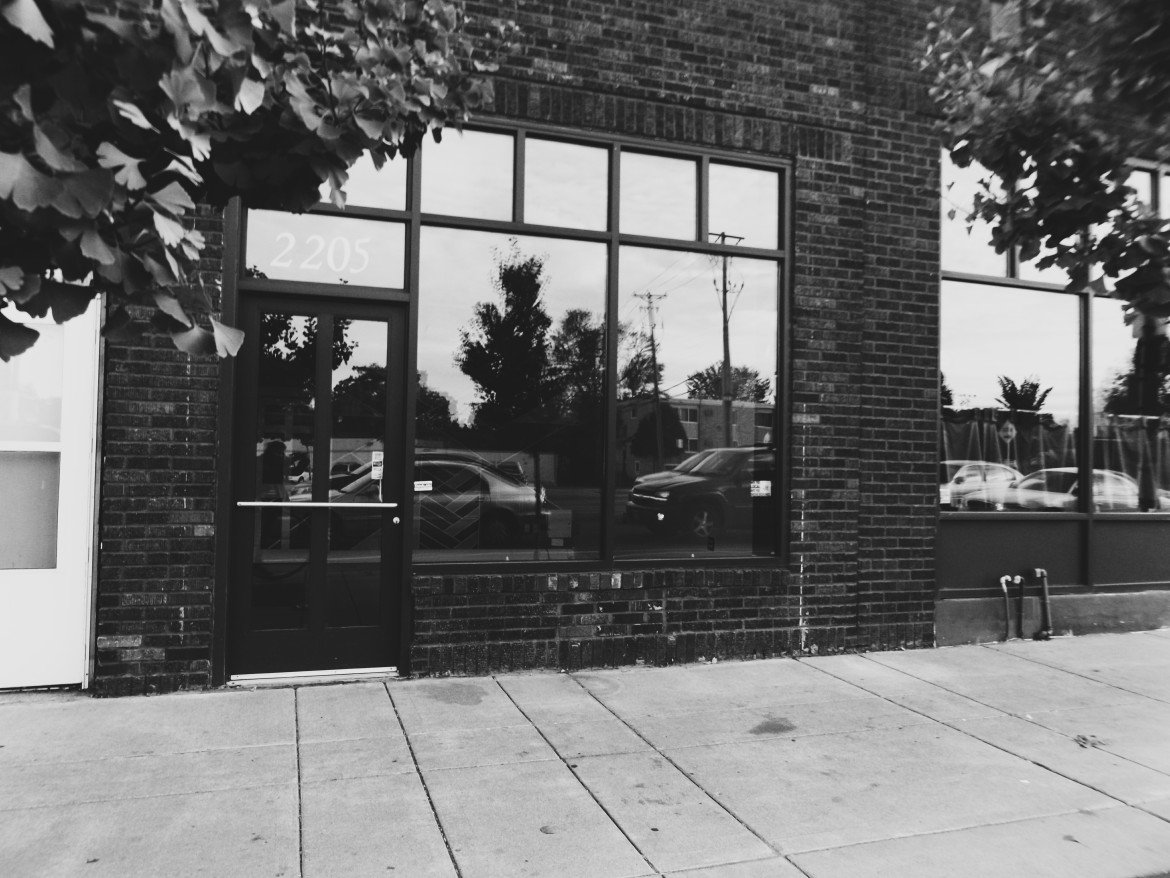 Friends and neighbors gathered at Ancestry Books to bid it farewell. It looked like every other event at the small North Minneapolis bookstore. Friends and community members spilled out onto the Lowry Avenue sidewalk, smiling and greeting each other with warm hugs. It was a vibrant block party on the same day as Lowry Open Streets.

People brought their whole families to see the space one more time, give good heart energy to its owners and buy great books at a discount. They posed for photos with handmade signs, thanking Ancestry for what it’s meant to the community:

(You can find these and more at the hashtag #ancestrybooksthirdplace on social media.)

When they opened Ancestry in June of 2014, Chaun Webster and Verna Wong always intended for their bookstore to be more than a business enterprise. Ancestry would be a third place, a space where people could not only find the work of Indigenous authors and authors of color, but also a space that built community. Telling by the reaction of the community to its departure, they clearly succeeded in that goal.

So why was such a beloved business closing its doors?

Chaun Webster is a founding member of The Firehouse Collective. The collective was formed in the fall of 2014 to acquire the city-owned parcel at 1704 33rd Avenue North, an old firehouse. They submitted a proposal to the city to buy the property, but their proposal was rejected. The collective is working to challenge the city’s Request for Proposals process, deeming it an inaccessible process that makes fair competition impossible.

At a Sept. 22 meeting of The Firehouse Collective, members talked more about North Minneapolis’ vulnerability to gentrification. They discussed a number of ways that Northside residents and business owners were being displaced from the community. When property ownership changes hands, renters and tenants are at the mercy of the new owners and are unable to determine what happens next.

I spoke with Webster one afternoon after the collective meeting. He and Wong had already announced that Ancestry Books would be closing at the end of September. I wanted to know why a first-year business that appeared to be doing well would close its doors.

Weeks earlier the Lowry Cafe, the restaurant next door to Ancestry Books, suddenly closed with no warning. Not even its longtime manager had any clue what was coming. One day, he went in to open the cafe and start his shift. The landlord met him there on Aug. 23, asked for the keys to the building and closed the Lowry for several weeks. There was no information or announcement to the surrounding community prior to closing.

“I don’t deal with people who do things that abruptly,” said Webster. He talked about the vulnerable position of businesses, particularly businesses owned by people of color, with short term leases. The manager and leaseholder of the Lowry had a month-to-month verbal agreement with the landlord.

“When our lease was up,” Webster continued, “Darryl wouldn’t give us a new lease. He wanted a verbal agreement, which essentially puts us in a month-to-month lease. Those are kind of trendy out here in Minneapolis right now.” He talked about now being in the position that the landlord could come in and take his keys on any given day.

He suggested business owners should have the option of long term leases, five to 10 years, so they are guaranteed a space to grow and settle into without sudden disruptions and displacement. Webster said some places approached him about relocating Ancestry Books into their space, but wouldn’t give him a long term lease.

“We have a right, in North Minneapolis, to stay here and determine the cultural and political landscape around us.”

I spoke with Darryl Weivoda, owner of the building that houses North End Hardware Store, the Lowry Cafe and Ancestry Books. He suggested that any connection between Ancestry Books closing and the temporary closure of the Lowry “is totally made up crap.”

“I fired that manager because he was a terrible manager,” he says. “He was doing illegal and unscrupulous things and therefore we had to let him go.”

Weivoda said Ancestry was a terrible tenant who never paid rent on time and had unreliable business hours. He believes Webster was looking to move the store and that he jumped on the troubles at the Lowry as a self-serving excuse to leave. When asked if Ancestry Books leaving in August would have broken their lease Weivoda replied, “No. They didn’t have a lease. The lease was up in June.” By his own admission, Webster and Wong were free to leave whenever they wanted.

Of course, the concerns about gentrification are not only about Ancestry Books, which plans to take time to find the right space and circumstances and re-open in a year or so. Other Northside businesses are thinking about ways to buy the spaces their businesses in which they operate, while a larger conversation looms about revitalizing the Northside.

Much of this conversation, according to Chaun Webster, has focused on bringing in large employers such as Walgreens to create jobs. These efforts often bring with it the promise of increased property values and with them, increased rents and property taxes, creating more of a hurdle for small business owners.

“Why don’t we provide services to the Avenue Eateries or the A-Sign Printings? Or other places that are already embedded in the community and have relationship with these different communities? That sounds like a better strategy to me to put people to work.”

Long time resident Bill Cottman has been living in North Minneapolis for 18 years. He has been photographing the changes he’s witnessed in the neighborhood.

“I take pictures as spaces and buildings shift from one state of being to another state of being.” I asked him what he’s noticed as a resident. He talked about absentee commercial property owners who “don’t necessarily keep the properties in really fine shape.” He also spoke specifically to the relative lack of African American business owners.

“The few black-owned businesses there are, I don’t know any of them that own the property they’re in, except the McDonald’s.” He’s referring to the McDonald’s on West Broadway between Dupont and Emerson.

Cottman also expressed some consternation at the idea of his community being “discovered.”

“We’re being discovered! The folks discovering us aren’t discovering the good things that are already here.”

He shared his understanding of how gentrification impacts communities. He believes that everyone wants nice places to live, places that are positive and safe and kind of quiet. “But things don’t get nice and amenity-filled until the dominant culture has a critical mass.”

This sentiment was shared time and time again at Ninth Ward City Council Member Alondra Cano’s most recent community event. On Sept. 30 Cano asked the question, “Who gets to live in Minneapolis in 2020?”

The forum included a panel discussion with Chaun Webster of Ancestry Books, Jessica Lopez Lyman, a Chicana studies scholar, and Neeraj Mehta from the Center for Urban and Regional Affairs at the University of Minnesota. The panel discussed many myths associated with gentrification. They also addressed historical and current displacement trends in Minneapolis, including an analysis of redlining that moved people of color and Native people into low-resourced enclaves.

One theme that surfaced was one of whiteness as a measure of community success. Neeraj Mehta talked about efforts to move people into suburbs where there are greater resources. “We shouldn’t have to wait for white people to come for resources to come.”

The panel held a Q&A with the community members gathered. It was a very rich discussion, much of which can be found at the #mpls2020 hashtag on Facebook and Twitter. People also shared their solutions and policy recommendations for stemming the cycles of gentrification that they see impacting Minneapolis, making sure that current Minneapolis residents get to grow with the city in the year 2020 and beyond.

The answer to the who gets to live here in 2020 will not likely be answered easily or soon. One thing is clear, though: those who are here now want to stay here and not be forced out. They don’t want to be priced out of their homes. They don’t want to be pushed out of their businesses. They want assurances that current Minneapolis residents get to grow with the city in the year 2020 and beyond.

As for Ancestry Books? They no longer have a physical location, but co-owners Chaun Webster and Verna Wong continue to be community builders and connectors, deeply invested in the future of these communities. Follow the store on Facebook and Twitter to find out what’s next.