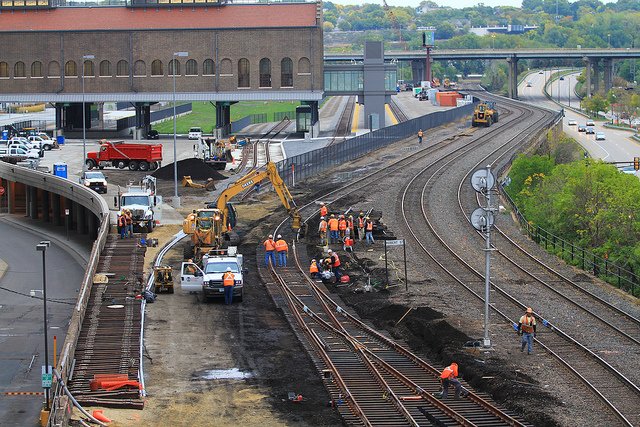 Amtrak, the National Passenger Railroad Corporation, could cease to be a “national” network if the federal government shutdown drags on. The company has said that it can ride out a short-term shutdown, on the order of “several weeks“, but it’s unclear what might happen beyond that point. The good news is that the company is in better financial health than they have been in a decade or more, somewhat extending the window of time they can operate without federal assistance. The bad news is that it would still be a extremely difficult task to find the $100 million or so per month they would need to keep running the company as it is today.

This article is reposted from TCDP media partner Streets.MN.

The federal shutdown has also come at an impeccably bad time for boosters of the Saint Paul Union Depot project. As you read this, work is progressing on finally connecting the station to mainline tracks in order to allow the Empire Builder to return to a downtown stop it hasn’t visited since Amtrak was formed in 1971—the return may only be shortlived.

Of course, political figures have proposed zeroing out Amtrak funding numerous times over the years, or slicing it up into regional businesses, so some thought has been put into how the company might try to cling to life. Until now, at least, the railroad has always received enough support to keep limping along. There have been occasional bursts of greater investment, but never the sustained influx of cash that the company has needed to get a truly stable footing.

Probably the most popular idea has been for Amtrak to condense service down to the Northeast Corridor, the 453-mile D.C.–Philadelphia–New York–Boston line which accounts for more than a third of passenger traffic on the system, and about half of the revenue. That’s because there are dozens of trains per day on the NEC, a frequency of service far higher than anywhere else (most of Amtrak’s overall route mileage only has one or two trains per direction per day). The NEC is where Amtrak most consistently turns a profit against operating expenses, though that doesn’t necessarily cover the costs needed to maintain and upgrade the rails and power systems (for instance, much of the line uses an antiquated 25Hz power supply, unlike the 60Hz power used throughout the rest of the country, and it will cost billions to fix).

Shrinking down to just the NEC, or the NEC plus a few branch routes, probably wouldn’t be necessary. Under the Passenger Rail Investment and Improvement Act of 2008, states must take over as primary funders of routes under 750 miles in length. States had until October 1st of this year to negotiate contracts, with October 16th (next Wednesday) set as the service cutoff date. Three states were still in talks at last count. So those routes (roughly 30 across the country) would probably still be able to operate going forward—but those are regional routes which would still become isolated from each other in many cases.

Most at risk are the long-distance trains, such as the Empire Builder which runs through Minnesota. These trains are still mandated under federal law, but don’t see any significant financial support from the states that they run through. Would the mandate to keep them running still be valid if the flow of federal money dries up? The long-distance routes are big, meaty targets simply because they are so long. The Empire Builder runs 2,200 miles, not counting the extra split it does near the west coast to serve both Portland and Seattle. In order to maintain daily service, four or five trains need to be in motion on that route at all times, as opposed to a short corridor route of the same frequency which would only need one or two sets of equipment. On the whole, the ticket revenue covers a similar percentage of operating costs on long-distance trains as it does on shorter routes, but shorter corridor trains have a history of needing some amount of state-level funding (which Amtrak counts as “revenue”—something to be wary of if you ever look at their monthly reports).

One possible solution, though it has its limits, is simply raising ticket prices on these routes. Passengers on the Empire Builder paid an average of 18 cents per mile in fiscal 2011, yet the train costs about 35 cents per passenger-mile to operate. Fare increases would be steep, but might barely be able to cover the gap. On the busy Saint Paul to Chicago segment, it’s hard to find a regular adult fare any lower than about 32 cents per mile—the fares get much cheaper in the less-populated areas west of the Twin Cities.

Going by that, Amtrak may already run at break-even along the Saint Paul to Chicago corridor, so one alternative could be to truncate the line here. The ridership picture would change drastically, since many people who get on or off within the MSP–CHI corridor are traveling to or from points farther west, but shortening the route would massively improve the on-time reliability of the train, particularly eastbound. The train usually picks up some delay on the way as it plies its way 1,800 miles from the Pacific Northwest to Saint Paul (earning the nickname “Late #8″), and these past couple of years have been particularly bad.

But the Empire Builder is not the most expensive of Amtrak’s routes. It has one of the best ratios of ticket revenue to operating cost of the long-distance services, so it may not be the first one cut if things came to that—the Southwest Chief and California Zephyr are both worse in terms of absolute-dollar subsidy. But the Builder isn’t far behind on that measure—despite a good operating ratio, the nature of the train and it’s long route both contribute to making it one of the most expensive routes to keep running, to the tune of about $57 million per year (though the $975 million to be spent on the new Vikings stadium could keep it running for 17 years).

Collectively, the long-distance trains need about $600 million per year to keep up with operating expenses. It’s not outside the realm of possibility that Amtrak would just start taking out loans to run the services for a while. The company now has its lowest debt load in more than a decade, so that could work for a short- to medium-term period. Of course, that’s dependent on credit markets still working properly. With the threat of federal default looming nearby, they could seize up again like in 2008.

What will actually happen? It’s hard to say. It probably shouldn’t be a top priority as compared to other effects of the shutdown, but it’s another thing to keep an eye on as the days turn into weeks. While hoping for the best, transportation officials in states, cities, and counties along long-distance routes should prepare by identifying funds that could be shifted to Amtrak if the need arises.

At top: A rail crew replaces a switch on October 4th in preparation for reconnecting the Saint Paul Union Depot to allow Amtrak service.