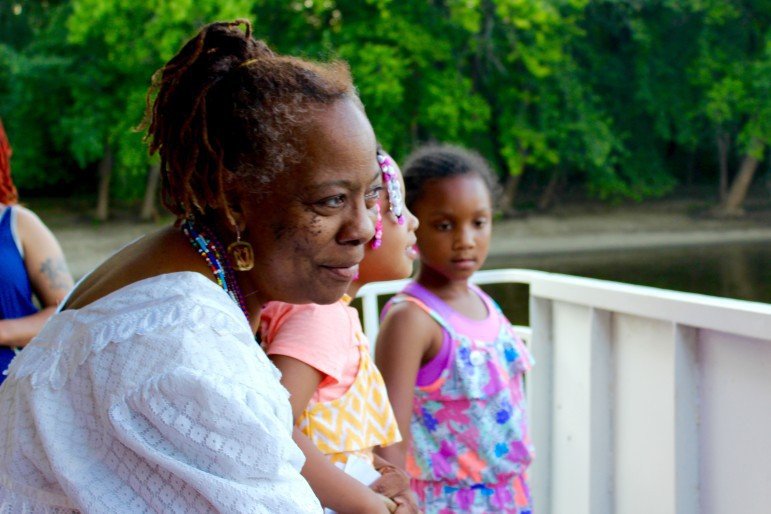 “I’m at a point in my life where I have forged a place where I can write, and I’m writing things out that maybe I’m still trying to make sense of,” Amoké Kubat said as we spent an early autumn afternoon talking about her new piece, “Angry Black Woman and Well-Intentioned White Girl.” The work-in-progress debuts tonight at Intermedia Arts, 2822 Lyndale Ave South in Minneapolis, at 7 p.m. followed by a Q & A and reception.

It’s not that the former educator and community elder hasn’t written before: she penned for “Recovering the Self: A Journal of Hope and Healing” and the Minnesota Association for the Education of Young Children’s “NEWS.” She has also written the first of her three memoirs, “Missing Mama: My Story of Loss, Sorrow and Healing.” Her latest work originated from her continuing activism around healing, especially for Black women.

But her new work-in-progress is totally different. The inspiration for “Angry Black Woman and Well-Intentioned White Girl”  came from a conversation she had with a white female friend. “I said to my friend, ‘I’m so sick of [being seen as] as The Angry Black Woman. And the friend said, ‘Like the Well-Intentioned White Girl?’ I said, ‘Let’s talk about it.’ These are stereotypes, and they don’t serve any of us.”

That one-on-one talk led to Kubat reaching out to Black and white women on Facebook to participate in two public discussions – one for for white women at Intermedia Arts and one for Black women at Hope Community – with the intention, Kubat said, of bringing the groups together for a third group.

The third group didn’t happen. “Black women had no desire to meet with white women,” she said.

“[White women] want to know what Black women think, feel or are angry about. But I told the [facilitating team] that worked with the white women that I didn’t care about why [the white women] thought why Black women were angry. I wanted them to concentrate on the well-intentioned piece — on why [they] think when [they] think [they’re] “doing good” or “doing your best” they feel like somebody misunderstands [them] and [they] get [their] feelings hurt. That’s where the problem starts.

And there are a lot of policing white women [here]; I’ve never experienced that before [moving here in 1987]. They want to tell you what to do and how to do it – and they don’t know you! They don’t see that as imperialistic…

You’re always against somebody’s fantasy of who you are. I have had friends who told me that they know more about Black people than I did because they read it in a book. You’ve been in my house for six months, hanging out with me and my kids, and you have the audacity to say something like that to me? Now, I’m pissed.”

And it’s not just in Minnesota. And it’s gone on too long and for the same reason: white feminists refusing, generation after theory after practice after books after social-media blow-out and fallout, to deal with their racism. Women of color want to heal – and not necessarily with white women. Because so many of us are tired.

“It’s energy draining,” Kubat said. “I don’t want to live my life with limitations, and white well-intentioned behavior, the having to take care of somebody else, someone else defining who I am, [second-guessing] what they think I’m going to do is limiting. And it’s constant.”

Kubat’s project also debuts at a fascinating contemporary juncture, with Black women speaking our truths through the arts both locally and nationally. Locally, Sha Cage just staged her one-woman show, “U/G/L/Y” at the Guthrie and won an Ivey Award. Carolyn Holbrook is curating the “More than a Single Story” panels of Black women writers at The Loft Literary Center. On the national level, Shonda Rhimes created the powerhouse (and cash cow) line-up on Thursday nights on ABC. Ava DuVernay is a well-regarded film director and advocate for Black women making our own cinematic paths. Issa Rae used the internet to create her hit web series, “The Misadventures of Awkward Black Girl,” and is turning it into an expanding media empire. And, of course, Viola Davis gave a still-galvanizing speech about women of color and opportunities in Hollywood after her Emmy win.

As for the reactions Kubat received about the project?

“I released the Kraken on this one,” she commented. She said she’s selecting the audience of peers to “come be a witness” at tonight’s reading. In the midst of the local responses – Kubat told me about the extensive threads of anguish and anger on the event’s page – national and international organizations have approached her to bring the work-in-progress to them. But that’s on the back burner for now.

“I obviously feel that [this] has to be told. It’s a spiritual assignment – and it’s bigger than me.”