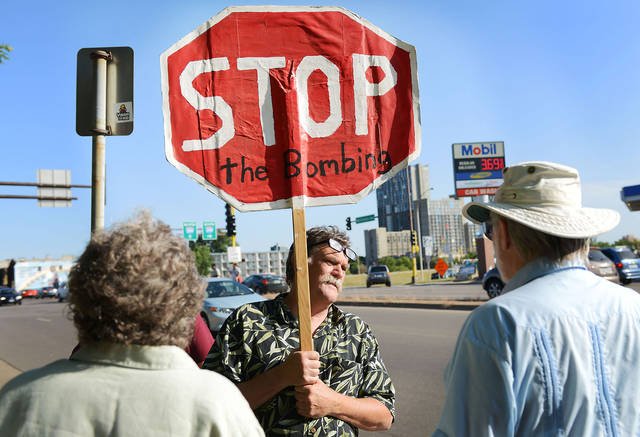 About 150 people protested Tuesday outside the office of U.S. Sen. Amy Klobuchar, D-Minn., echoing legislative debate over intervention in Syria.

With signs in hand, protestors chanted through megaphones as cars honked in the background.

Currently, most of the Minnesota delegation is split on supporting the strikes.

Klobuchar hasn’t said definitively if she’ll support an intervention. In an Aug. 27 statement reported by Minnesota Public Radio, she called the reported chemical attacks on Syrian civilians “horrifying,” adding that they “cannot be tolerated.”

In a Tuesday statement also reported by MPR, she said she thinks the current intervention proposal is “too broad,” adding that she still opposes a ground intervention.

“This can’t be an open-ended commitment, and it definitely should not lead to American boots on the ground,” the statement said.

U.S. Rep. Erik Paulsen, R-Minn., also found the current proposal problematic. He said in a statement that the “request for military action is … too broad, too open-ended, too risky.”

Other Minnesota congress members were more clearly opposed to an intervention.

U.S. Rep. Betty McCollum, D-Minn., said in a statement released Tuesday she wouldn’t commit to support or oppose military action before the legislation draft is finalized, but said she opposes unilateral military action.

U.S. representatives Michele Bachmann, R-Minn. and Rick Nolan, D-Minn., have said in statements they will oppose the measure.

A public opinion poll conducted by the Pew Research Center last week found that among 1,000 U.S. adults, only 29 percent favored U.S. airstrikes against Syria. Nearly half opposed it, and 23 percent answered they “don’t know.”

“I think it’s important that our elected representatives know that the vast majority of people in the country are opposed to going to war,” said Cherrene Horazuk, who attended the rally. Horazuk is president of the American Federation of Local State, County and Municipal Employees Local 3800, but spoke in her personal capacity.

Horazuk said she was opposed to military intervention based partially on the aftermath of the Iraq War.

“These wars don’t actually end up improving conditions,” she said. “We leave these places in chaos, and this would just be one more example of that.”

A few people also gathered near the protest and described themselves as “pro-limited military intervention.”

Suzan Boulad, a first-year Syrian-American University law student, said the decision to invade Syria would be hard but necessary.

“At this point I think that it’s the best hope of actually putting a hand to the regime’s stroke,” she said.

She said she believes U.S. diplomacy isn’t working and noted an “exponential increase” in the Syrian civilian deaths.

“This isn’t necessarily an end to the conflict,” Boulad said, “but we believe it’s going to be enough to give the opposition the upper hand.”