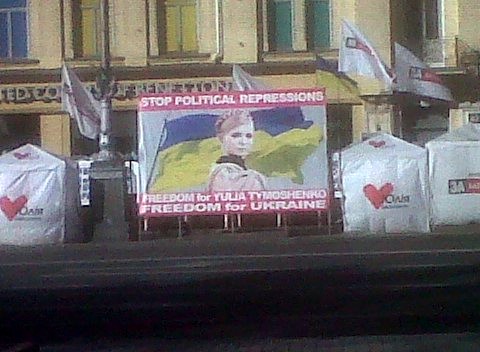 Americans often times don not realize how good our election system actually. Some bitterly complain–with little evidence to support their contentions–that the American political system is perforated with voter fraud and that election officials are biased and do a bad job counting ballots. Consider ourselves lucky.

For the last week I have been teaching and lecturing in Kyiv (Kiev) Ukraine. I was invited to lecture on election law at the school of law at Taras Schevecheno University. I was also asked by the US State Department to give two additional lectures on American democracy. One for the history department at Schevecheno University, the other at the Ukrainian National Library. All of my public lectures were packed with students and members of the public eager to learn about America. They also wanted to talk about their elections.

Ukraine is having its national elections on October 28. Yet unlike the United States, the prospect of a fair election is nil. Ukraine was part of the USSR but in 1991 achieved independence. Its democracy has struggled, with the turning point–or so it appeared–reached in 2004 when a rigged election was thrown out by its Constitutional Court and a new fair election was ordered. Ukrainians took to the streets in what was called the Orange Revolution, demanding free and fair elections. It looked like they got what they wanted. Yushchenko, a reformer looking to the west, had defeated Yanukovych to become president. In 2006 free parliamentary elections produced a governing coalition electing Yuliya Tymoshenko as prime minister. But then in 2010 elections, Yanukovych barely defeated Tymoshenko in elections that were barely fair and free. In 2010 local elections were held, and they were not free.

Yet now it appears that the Orange Revolution is perhaps ready to fade to black. Yanukovych and his governing coalition have jailed the leading opposition candidate Tymoshenko on trumped up charges. Yanukovych’s supporters are trying to enact a defamation law to criminalize criticism of the government. Opposition candidates and parties are being removed from the ballot. Few expect the elections to be fair.

Whether people will take the streets again I do not know. Kyiv is politically odd. I see opposition commercials on television and there is a permanent encampment protesting Tymoshenko located not far from Independence Square. Students are openly critical of the government but yet there seems realization that the election results are already known and that perhaps more restrictions are on the way.

America’s political system is far from perfect. Money corrupts the political process for one. The choice of candidates is often lousy and the two major parties provide voters with often mediocre options. Yet the opposition is not jailed. We have no real evidence of voter fraud or vote buying with two close elections in Minnesota demonstrating a political system 99.9%+ free from errors. Studies across the country further prove the general integrity of our political system and generally how fair and impartial the administration of our elections. We have the right to openly criticize the government and a right to vote.

Yet all of that is being threatened. The cries of voter fraud and efforts to restrict franchise worry me. Restrictions seeking to be put in place across the country to make it more difficult to vote compromise the integrity of our democracy. Stories of partisan election officials and legislatures trying to limit franchise too smack of vote rigging. Laws that make it difficult for third parties to access the ballot are fearful. And of course now watch some of our political debates where political honesty and truth seem secondary to winning. We are not Ukraine but we certainly are not the model of democracy we like to believe we are.

The lesson of Ukraine for the United States is that we take our political system for granted. We should not be creating a democracy that attempts to disenfranchise voters and make it difficult for parties to campaign and gain access to the ballot. Students in Kyiv worry that the rich are buying elections in their country. We too should worry the same and not let those who argue cynically that money is speech win the argument. Some I know who argue that money is speech content they are merely neutrally looking out for the rights of us all, including the poor, to give money to the candidate of their choice. Anatolie France once said the rich and poor equally have the right to sleep under the bridge. Some equality, some choice. We can do better as a country, and we should.

Kyiv is a beautiful city. I spent a lot of time just hiking it in between lectures and sampling wonderful food. The best part of the city is the architecture of the old churches. The city is old, founded around 980 CE, and some of the churches approach 1000 years old. At some future point I will post a few of my pictures. Beyond the buildings, the people are very friendly and there is a love for flowers, tea, and sweets here that is great. Wonderful pastry shops and places for treats are everywhere. This city has one of the best subways (Metros) I have every ridden, and I get could get anywhere for hardly a cost. One of my colleagues took me to the Kyiv Opera House to see a terrific contemporary ballet. The opera house was stunning and the ballet excellent.

My favorite events here were the talks with the students and the public. My public lecture at the Ukraine National Library was standing room only and the questions from the audience great. The same was true with the student lectures, but the talk I gave in the history department to them was especially fun. Students here are still excited by Obama, even if the same is no longer true in the USA. The history department chair had spent some time at the University of Iowa and we had common friends. In fact, there is another funny story here. One of my law colleagues here had visited the country of Georgia recently and she ran into one of my former students from Moscow State University. This is truly a small world!

Final Thoughts on the American Elections

Amazing how much Obama threw away with his horrible first debate. He all but had the presidency sew up and destroyed it. The numbers now suggest that his leads in the swing states are disappearing too. What happened? Simply put, Obama failed to demonstrate a passion or install a passion among his supporters and swing voters and he finally gave those doubtful about voting for Romney to consider him a viable alternative. Obama needs to shift the momentum in his second round with Romney, otherwise the swings will continue to shift and it will be more and more difficult for him to win. Obama does have voter registration and money on his side, but that may not be enough.

Off to Malta to lecture!