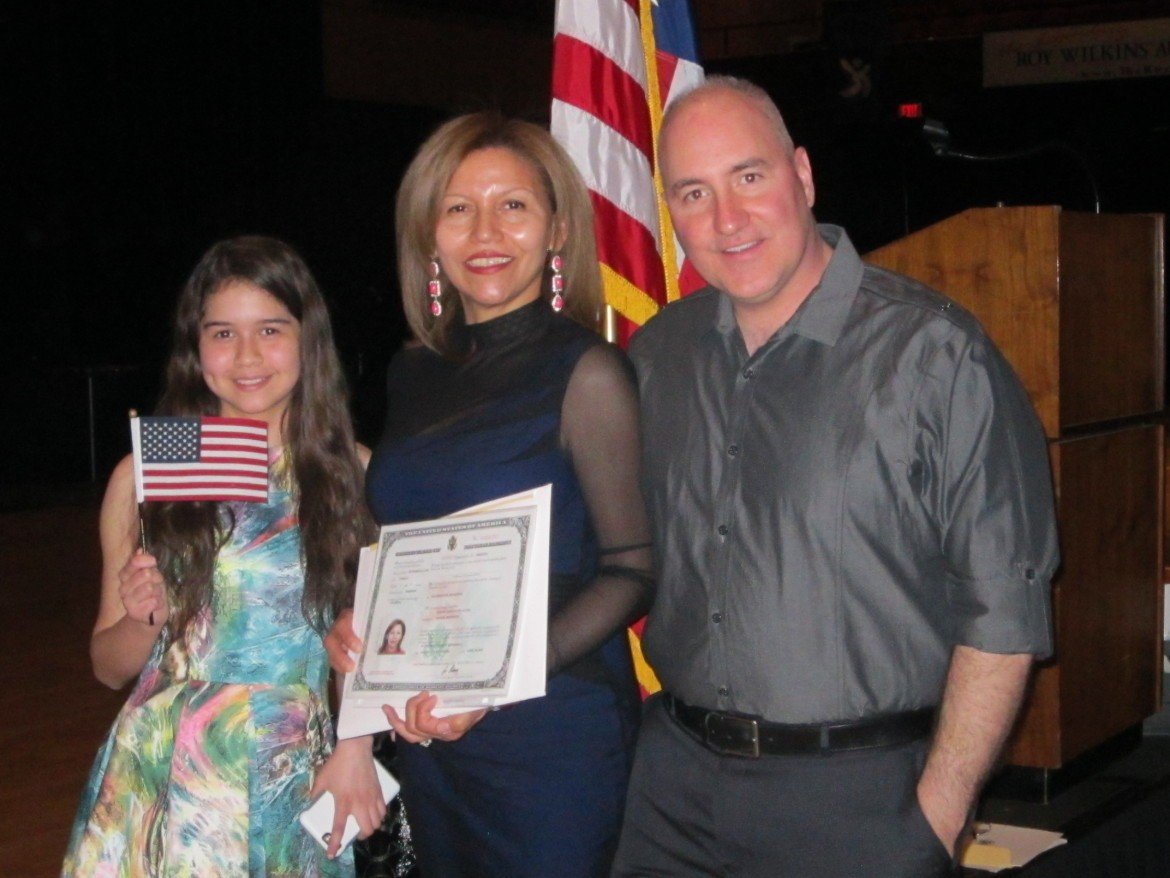 Martha Sofia Acuna, center, after becoming a US citizen

Amazing ethnic dance performances, foods, and exhibits – that’s what usually comes to mind when you think of the Festival of Nations, in its 83rd year as the region’s largest multicultural festival. But, the 52 men and women who gathered in the Roy Wilkens auditorium of Saint Paul’s RiverCentre on May 1 will always remember this year’s Festival of Nations as the place they became U.S. Citizens.

As the soon-to-be citizens waited, excitement and nervousness in the room was palpable as three women, clipboards in hand, circulated throughout the arena. “We’re with the League of Women voters,” explained Paula Clark. League volunteers attend all naturalization ceremonies in the state (28 this year), registering the new citizens to vote. Fully 90% of newly-naturalized Minnesotans register to vote, she said.

U.S. District Court Magistrate Judge Janie Mayeron welcomed the prospective citizens and their guests and administered the Oath of Allegiance, an official part of the naturalization ceremony. Mayeron noted that those seeking citizenship came from 27 different countries, and she spoke of the importance of diversity in the U.S., saying that although they had renounced the citizenship of the land of their birth, “…it does not mean that you renounce your love for the land where you were born or the people who live there. It does not mean that you should forget your native language or how to cook the food of your homeland…for the benefit of yourself, your children, your grandchildren, and every other citizen of the United States, I hope that you preserve your native language, heritage, and culture. Doing so not only enriches the lives of those in your family, it also enriches America and all of us living here.”

Mayeron recognized that for many of those present, becoming an American citizen was a dream come true. She encouraged them to continue to dream, adding that she hoped that all of their dreams come true. “I hope that you will not let your dreams die in your sleep,” she said.

Hernandez, came to the U.S. from Juarez, Mexico as a teenager, and enlisted in the U.S. Army, volunteering to serve in Iraq. Hernandez was still in the Army when, after seeing Placido Domingo perform, he asked the legendary tenor to listen to his voice. After hearing Hernandez sing, Domingo invited him to join the talent development program he had founded with the Washington National Opera. That was in 2007. Today, Hernandez is living his dream when he performs with the American National Opera Company.

Martha Sofia Acuna, a native of Columbia, who now lives in Savage with her husband and daughter, said that she found her dream while studying in the U.S. She and her 13-year-old daughter Valeria have been in Minnesota for nearly eight years. “I came for education, a better life,” she said. “I found love.”

“We met in a library, went for coffee and fell in love,” says Kelley.

“I feel very proud of her, for all of the studying, answering those 100 questions,” Valeria says of her mother’s preparation for the citizenship exam.

For senior citizen Li Ping, formerly of Guangzhou, China, citizenship is all about family. Her parents have been in Minnesota for 14 years, says daughter Kitty Huang. Family members live in the Eden Prairie/Minnetonka area; Li Ping’s husband, Chen Huang, was naturalized six years go. “We are all here,” says Huang. “My brother, my sister, and the grandchildren.” She listens to her mother for a moment and then translates. “My mother likes the change of seasons in Minnesota.” She listens again to her mother’s Cantonese. She says that her parents have made some friends at the Twin Cities Chinese Christian Church.

Asked why, after 14 years, she has become an American citizen, Huang once again translates. “My mother says, she loves America. America is her homeland now.”