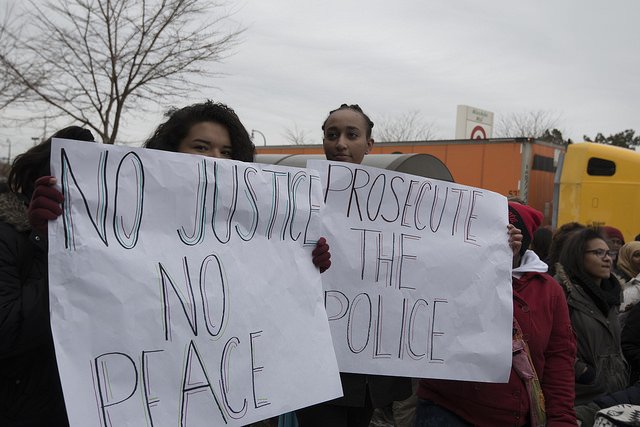 (Photo by Fibonacci Blue published under Creative Commons License) Students at South High School held a sit in for four and half hours, the length of time Michael Brown's body was on the street after he was killed. Then they walked out and marched to the Minneapolis police 3rd precinct.

“The police are not merely a ‘spark’ factor. To some Negroes police have come to symbolize white power, white racism and white repression. And the fact is that many police do reflect and express these white attitudes. The atmosphere of hostility and cynicism is reinforced by a widespread belief among Negroes in the existence of police brutality and in a ‘double standard’ of justice and protection—one for Negroes and one for whites.” – Excerpt from the 1968 report, informally known as the Kerner Report, issued by the National Advisory Commission on Civil Disorders (also known as the Kerner Commission).

The grand jury’s decision not to indict Officer Darren Wilson for the shooting death of Michael Brown spurred protests, looting, and businesses set on fire. It was a scene reminiscent of the 1960s. The Kerner Commission was formed in July 1967 by President Lyndon Johnson to explain the riots that plagued cities each summer since 1964 and to provide recommendations for the future. The Commission’s report found that America was “moving toward two societies, one black, one white – separate and unequal.”

The decision not to indict the white officer for the killing of a black teenager confirmed the widespread distrust by blacks in the criminal justice system. The demonstrations are the result of frustration at the continuous deaths of unarmed black males by police. The protests that ensued, and the military-style police response to the protests, are an all too familiar sight in America. It appears that 46 years after the release of the Kerner Commission’s report, the warnings about police brutality and a “double standard” of justice have been ignored. A recent report by ProPublica based on federal data showed that black males between the ages of 15 to 19 were 21 times more likely to be shot dead by police than their white counterparts. The disparity of unarmed black males killed by police has been highlighted in a recent five month period sparking nationwide outrage:

There is no denying that police institute, implement and reinforce this “double standard” of justice when confronting blacks and whites. For instance, Crawford was shot while carrying a bb gun in the store, an item which Wal-Mart sells. However, no white men were shot or killed for openly carrying handguns and assault rifles in Target stores, which should have alerted more of a panic as Target does not sell guns or ammunition. But because black males – in general – have been demonized as dangerous, violent criminals, the sight of Crawford with a gun at a store that sells guns escalated unreasonable fears. Yet, heavily armed white men at a store that does not sell guns is viewed as an exercise of their Second Amendment constitutional right to bear arms.

In the police killings of Garner, Ford and Brown, police reported that the men were suspected of crimes, and resisted arrest. Garner was accused of selling untaxed cigarettes, a misdemeanor. Ford was alleged to have “continued walking and made suspicious movements, including attempting to conceal his hands” according to the Los Angeles Police Department’s news release. Brown was suspected of stealing a $48.99 box of cigars. None of these are serious crimes. None of these acts should have lead to a deadly confrontation with police. Even if Garner, Ford and Brown were suspected of these crimes, they should have been allowed their constitutional right to due process and their day in court. The same due process afforded to James Holmes, a 24-year-old white man who allegedly killed 12 people and wounded 58 others when he went on a shooting spree at an Aurora, Colorado movie theater. Police arrested Holmes in the theater’s parking lot. In his car he had an AR-15 assault rifle, 12-guage shotgun, and .40 caliber Glock handgun. Holmes was not placed in a chokehold, he was not shot, and he was not killed.

The Kerner Commission warned that America faced a “system of apartheid.” The report condemned “white society” for isolating and neglecting blacks. We do not need another government commission or report to tell us that there are two Americas. Instead, we need sincere, concerted, and long-term action to institute equality, fairness, and racial understanding in our legal, economic and educational institutions.

Tina Burnside is an attorney and writer who lives in Minneapolis.