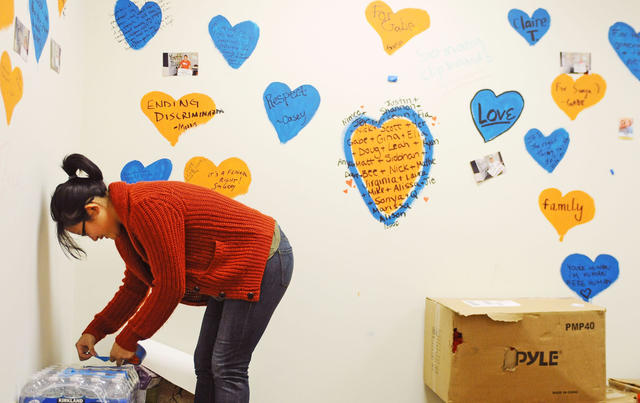 Minnesotans United for All Families youth organizer Yer Lor packs up the group's Dinkytown office Saturday afternoon. The group opened the office weeks before Election Day to ramp up campaign efforts against the marriage amendment, which was rejected by voters last Tuesday. (Photo by Bridget Bennett)

Days after voters struck down a proposed constitutional amendment that would ban same-sex marriage, Minnesotans United for All Families closed offices around the state.

Although the amendment’s main opponent is no more, a new conversation is on the horizon.

State law still prohibits same-sex marriage, but with momentum gained from the amendment’s defeat and the new Democratic-Farmer-Labor-controlled Legislature, some say the next step could be legalization.

“I think it means that we will have a serious discussion about what the state of Minnesota should do to provide legal protection and security to gay couples and their children,” said University of Minnesota law professor Dale Carpenter.

This year, voters in Maine, Maryland and Washington chose to legalize same-sex marriage, joining the six states and Washington, D.C., that have done so already.

Carpenter said the issue would probably take a back seat to the state’s budget and ongoing economic problems, but he thought the Legislature may address it at a later point.

He said the situation is similar to when Republicans took the state House and Senate in 2010.

“[Republicans] initially said they didn’t want to address the issue of passing a constitutional amendment and instead they wanted to focus on the economy,” Carpenter said. “They did that for a couple of months, and then they launched into their gay-marriage crusade …”

DFLers said last week the budget was going to be a priority, “but that doesn’t mean they won’t address gay marriage later,” Carpenter said.

MN United was a grassroots campaign which amassed about 700 coalition partners, 27,000 volunteers and 67,000 donors.

The campaign, which raised about $10 million, was formed last May by Project 515 and OutFront Minnesota, two organizations that have fought for decades for LGBT equality in the state.

Project 515 spokesman Eric Jensen said the groups will now “look at the landscape” before proceeding.

The two groups are holding an Equality and Justice Summit on Dec. 1 to look at issues confronting Minnesota LGBT communities and start to make plans for 2013 and beyond.

Project 515 derives its name from the 515 state statutes that give rights to married couples, like visitation rights at hospitals, for example.

Jensen said the group’s immediate focus would be looking more closely at the results of the election and trying to gain legislative support.

“The election didn’t do anything to change the 515 laws that discriminate against same-sex couples and their families in Minnesota,” he said.

Jensen said the question they want to pose to the Legislature is how to reduce or eliminate “these 515 laws that discriminate.”

Taking a back seat

Despite any momentum gained, legalizing same-sex marriage may not be a priority in the Legislature just yet.

Sen. Roger Reinert, DFL-Duluth, said that the Legislature’s main focus in 2013 will be the expected budget deficit.

“I know that a lot of folks that worked on the ‘Vote No’ campaign would like to see that first thing out of the gate,” he said. “That’s not going to be the case. We really have to deal with the budget situation first.”

Reinert, whom Project 515 endorsed, said those who hope to see the issue brought up in the Legislature need to have “a little patience.”

He said that odd-numbered years are usually budget years for the Legislature and that 2013 would be no different.

Rep. Phyllis Kahn, DFL-Minneapolis, who represents the University area, said that she would look at the statutes the groups are concerned about.

Kahn said the Legislature would likely start by going through the list and addressing the aspects that are “easier” to change, such as discrepancies in hospital visitation rights, something she said is “inherently cruel.”

Sen. Scott Dibble, DFL-Minneapolis, also said that the budget would take priority in the next session.

Dibble, who is openly gay, spoke at the MN United Election Night event with his husband. The two were married in California, but in Minnesota, he said, they are “legal strangers.”

Dibble said he believes that with the DFL Legislature, the issue is more likely to come up. He said that after the “momentous election,” a few ideas are emerging from the results.

Dibble said he wasn’t sure what the election means for the coming legislative session.

“I know we’re going to get to work on this issue, but I don’t know what the timeline is.” 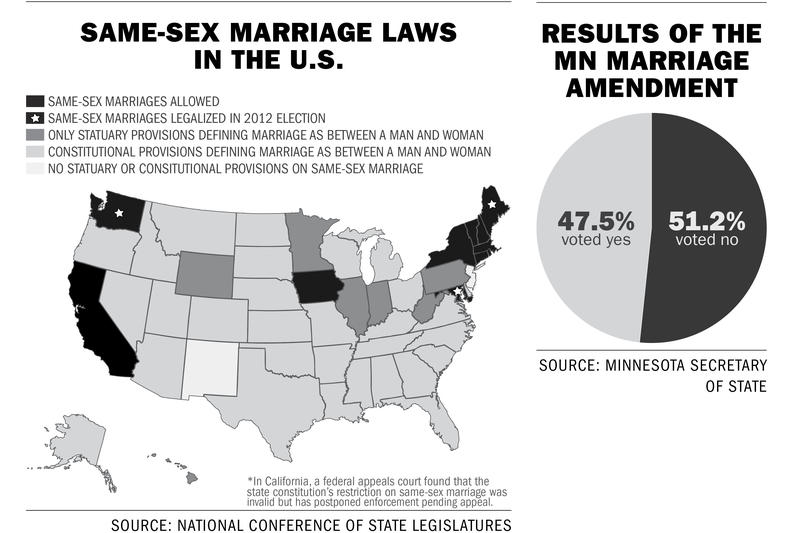 Minnesota For Marriage, the amendment’s main ally, campaigned and raised millions of dollars, as well. The day after the election, the organization released a statement from Chairman John Helmberger.

“Despite the disappointing outcome of this election, we rejoice tonight that marriage is still marriage,” Helmberger said in the statement.

“… However, this election is not an end but a beginning. The groups that have come together to protect the definition of marriage look forward to getting on with the work of restoring a vibrant culture of marriage in our state.”