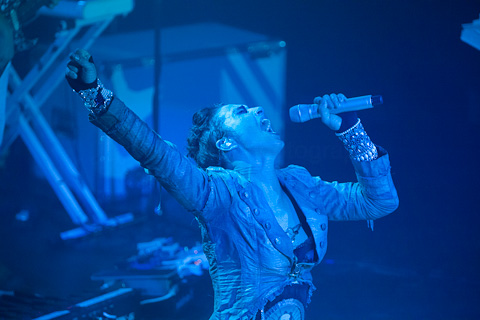 An Amanda Palmer concert is one of those places where you run into friends you didn’t expect to meet, then like them a little better afterward. It’s the kind of place where you’re not always sure what’s happening, but you roll with it because … hey. It’s the kind of place where you don’t feel exactly safe, but you walk out feeling stronger because nothing happened that was quite beyond your capacity to cope.

You clap your hands with delight. You dance when your throat is too tight to sing. You smile indulgently when something is silly for its own sake. You walk away knowing that the music, as odd and whimsical as it was, was professionally conceived and arranged and delivered.

On Wednesday, October 3 at First Avenue, the evening started the way musical shows never do. The headliner walked on stage. The stage lights didn’t come up immediately. Palmer gave them a moment, then shrugged and moved on. She had a job to do. She was there to introduce the first opening act.

Jherek Bischoff is a multi-talented musician and composer who put together an orchestral album by traveling the country and recording individual artists in their living rooms. He started the evening by telling us his first song had been written for orchestra. Then he asked, “Can you turn up the bass? Like, obnoxiously loud?” and proceeded to play it by himself on electric bass, using just one loop track. The audience was dancing well before he was done, and he finished to thunderous applause. 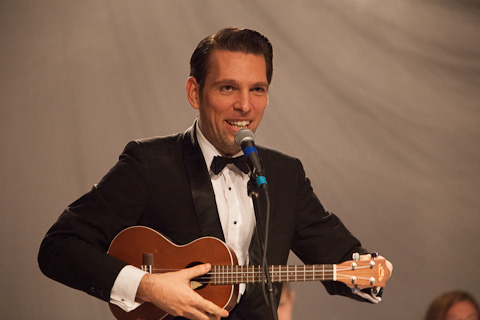 After Bischoff persuaded the audience to sing backup—in tune—for an entire song, did things that can’t possibly be done with a ukulele, and played a couple of songs with the local volunteer musicians that couldn’t possibly have been learned in an hour or so, Palmer returned to the stage to introduce the next act.

The Simple Pleasure moved us from Bischoff’s lounge aesthetic into the Eighties, with crowd-surfing lawn flamingos and dueling keyboards. Lead man Chad Raines jiggled and shook in hot pink, zigzagged, sparkly spandex tights, dropping into the splits in the first song and eliciting a cheer from the crowd. 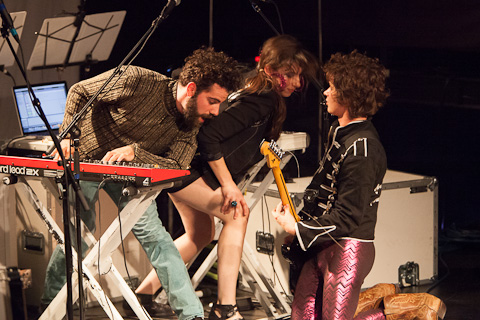 This set was the weakest spot of the evening, but that isn’t saying much. The music was good and the energy amazingly high. However, in an evening of oddities, playing well, dancing hard, and faithfully channeling a bygone era of music just weren’t enough to stand out.

One more introduction from Amanda Palmer, and we were still not listening to the main act. Nobody cared, however, because when Palmer plays in Minneapolis, it’s an opportunity to put husband Neil Gaiman and his British accent on the stage. Appropriately for someone who writes the occasional comic book, Gaiman shared his origin story. Some kids learn how to smoke hanging out behind their schools. Some learn about French kissing. Gaiman learned the power of words, and he used them to make the experience come alive for us. 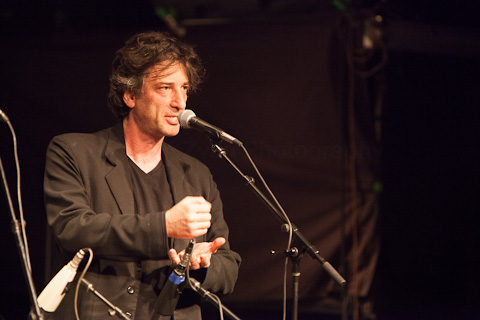 The final opening act stood out, even in a night of stand-out acts. Ronald Reagan, “Boston’s Premier 80’s Pop Saxophone Duo,” would steal the show anywhere—even without the terrifying Steve Perry wig on Kelly Roberge. No one asked the audience to sing this time. They didn’t have to. They just started playing “Don’t Stop Believing,” and the audience displayed its age. Or maybe its dedication to oldies radio. 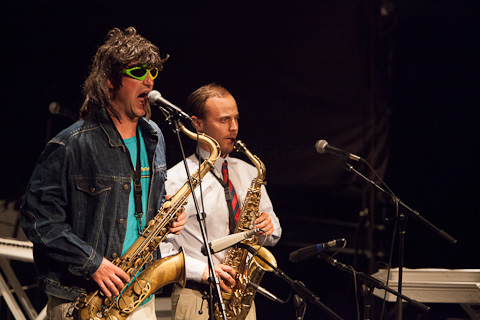 Then and only then was it time for Amanda Palmer and the Grand Theft Orchestra. “Smile (Pictures or It Didn’t Happen)” washed over the crowd, inescapable and enveloping. As a friend put it, “It was like watching a tidal wave come at you but when it hit, it felt like a hug.”

The large white cloth hung across the back of the stage stopped looking like a hasty dust sheet hiding the back wall and became a projection screen with images flipping past. The one nude stood out in the collection of candid snaps, bare breasts not shocking but grabbing attention. As the slide show rolled through its fifth or sixth iteration, though, you stopped noticing the breasts and saw the joyful pose of the woman instead. 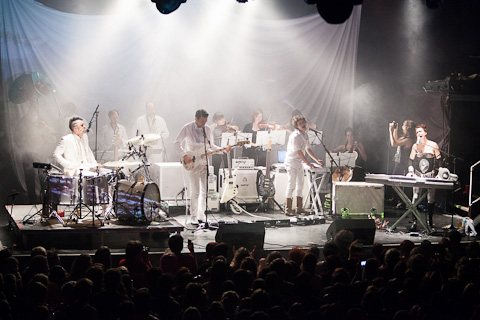 That wasn’t a bad metaphor for the show itself. While oddities abounded, they eventually became the norm. Then the spotlight shone on the music itself. Nowhere was this more obvious than in the cover of the Dresden Dolls’ “Missed Me.” Abruptly in the middle of the song, the music stopped. Palmer, Bischoff, Raines on lead guitar, and drummer Michael froze.

Then they ran around the stage in a routine that would have felt at home in a Keystone Cops movie. When they settled, everyone was playing a different instrument and the song went on. It stopped again, then started with a third lineup. Eventually, the shuffle brought everyone back to where they began. Never did the music feel any worse for the changes, but once the original arrangement was restored, the expertise of each musician stood out. The flourishes of masters were visible where they hadn’t been before. You knew why it was Palmer on keyboard and why McQuilken was in control of the drums.

The standout number of the evening was a song Palmer didn’t write. Instead she made it her own—and ours. “In My Room” is a deceptively simple song from British duo Yaz. Sampled voices repeat phrases from stories over layered percussion loops and minimal keyboards, with a single, stark voice singing about isolation.

The transition from the highly orchestrated songs preceding it was abrupt. Before the show, Palmer had invited members of the audience to submit their stories of bad things that had happened to them in their rooms. As the other musicians left the stage, she opened the box with all these stories inside. Rape, assault, emotional abuse, death—she read each of them aloud. One heckler protested the negativity. Then the musicians returned, hugged, the staccato drumline started, and the song was reinvented for the evening with the pain of the audience transformed—with their permission–into powerful art. 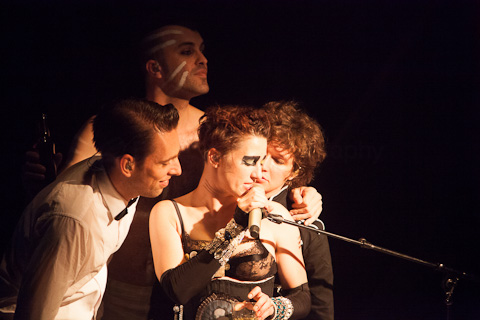 Theater Is Evil, the album Palmer is touring to support, is Palmer’s most obvious exercise in teamwork to date. “In My Room” and the rest of the show made it obvious that, right now, Palmer’s goal is to make art with as many people as possible. That had the occasional downside during the show, as Palmer’s voice and cutting lyrics were buried under the instruments of her collaborators. It also produced amazing moments of cooperation, as when Palmer crowdsurfed in a coat with an astonishing train, and the audience spontaneously spread the train out until it covered the dance floor. 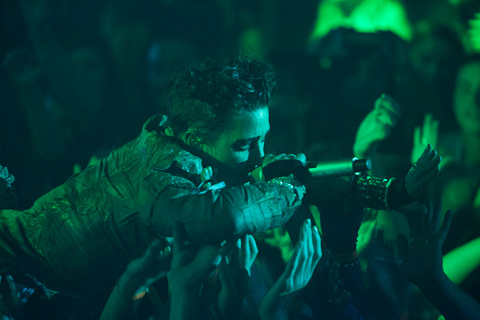 An Amanda Palmer concert is an experience that has to be lived, has to be performed. This show was no exception. 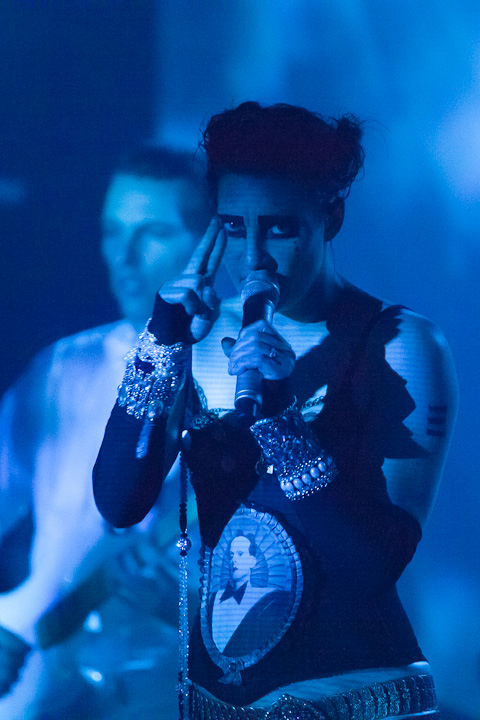 With the Grand Theft Orchestra, even the videographer is part of the show. 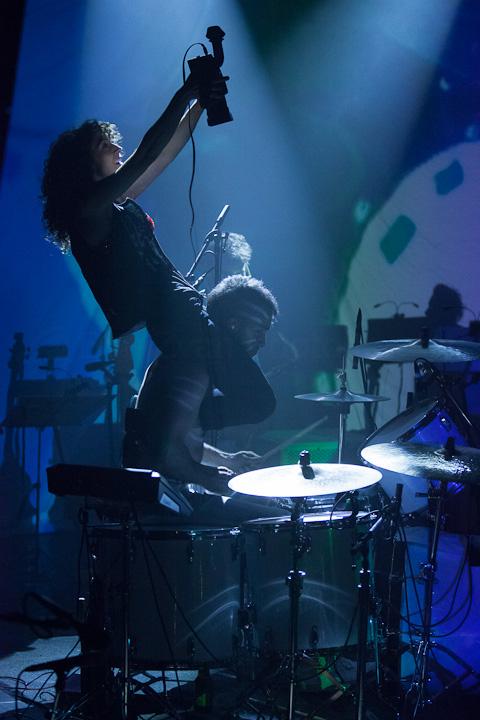