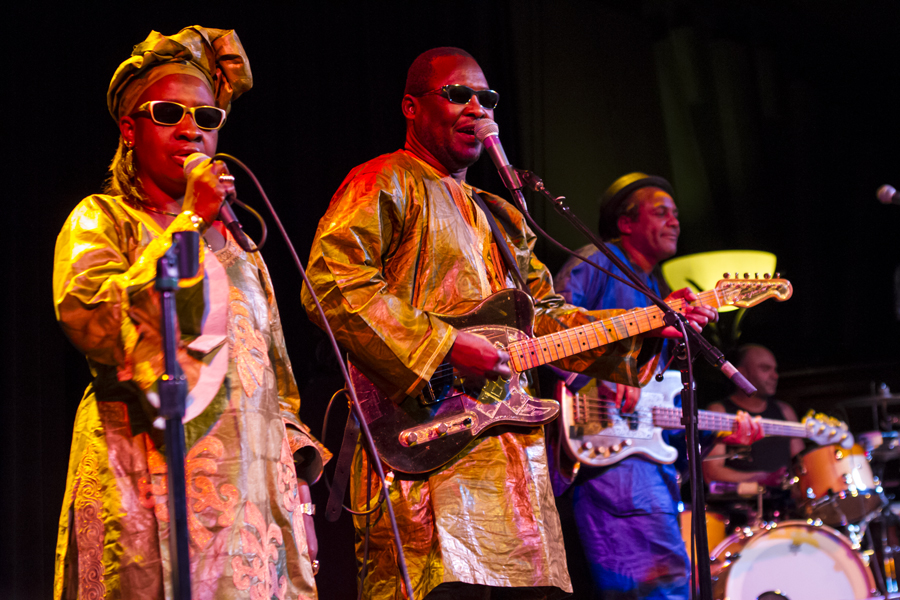 Amadou & Mariam performed with their band at Cedar Cultural Center on June 28, 2013.

It seemed that even as Amadou & Mariam were being led up to the stage, people were already dancing. That wouldn’t stop for two hours, as the couple and their band threw song after song of ridiculously danceable music at the crowd.

Most of the material was from their 2012 album Folila, but they also pulled out other songs from their 2005 and 2009 collaborations with Damon Albarn (of Blur and Gorillaz). Going into the show, it was hard to tell what to expect of the material from Folila, as many songs feature guest appearances and collaborations. The album was actually recorded twice, once in New York with members of TV on the Radio and The Yeah Yeah Yeahs, then in Mali, and then brought it to Paris where the two versions were melded and more people contributed. On that record there is a lot of interplay between what Amadou & Mariam do and their guests. Or, at least it seemed like there was. In the end, the layers of collaboration can easily be peeled away, because the heart of those songs always was in what Amadou and Mariam were doing.

It became most evident during the sixth song of the set, Mariam joined the stage after bowing out for two songs, and Amadou started up the chugging beat of “Wily Kataso.” On album, the song features TV on the Radio’s Tunde Adebimpe and Kyp Malone and a funky, slinky “Theme from Shaft” wah-wah guitar line. None of that was present live, which brought out different elements of the song. It shined as a vehicle for Mariam; her lyrical delivery seemed to have the flow and patter of a good rapper. The sultry late night jam became much more of heavy rave up, with djembe player Boubacar Dembelé and Mariam leading the crowd in call and response sing-alongs, something the crowd ate up greatly. It was a good way to interact with and engage an audience whose language they didn’t know as well as they do French. Through out the show, it was clear that even without the actual contributions of the western musicians that played on Folilo, Amadou & Mariam’s music is fusion in the same way that Afro-beat is–the western influence, be it jazz, funk or rock n’ roll, is impossible to remove as it is a cornerstone of what they do.

The combination of “Wily Kataso” and the song before it, “Kobena” firmly established Dembelé as a driving force of energy in the live show. On “Kobena” he traded lead lines with Amadou, the rapid-fire exchange leading to the two of them playing the same line simultaneously. It was an impressive display that established the djembe as more than auxiliary drum, but as an important lead instrument in West African music. The drum is not as prominent in the mix of Folila, but it was all over the concert, and Dembelé’s flashy, talented playing and his ever-present smile and dancing fueled a lot of the energy for their music.

“Kobena” and the songs that followed it also featured another western influence, the French part of their recent recording. During many songs, the keyboardist was pulling out sounds that sounded right out of a Daft Punk or Air album. It got to the point during the “Billie Jean”-esque bass line on “La Réalité,” with those filtered keyboard sounds, that I was almost expecting them to play Daft Punk’s “Get Lucky” next. It wouldn’t have been out of place, and honestly I think they would have done it well. It happened again in main set closer “Beau Dimanche” and encore opener “Sabali.” The presence of those sounds seemed to touch off some other cultural element that seemed to have the crowd dancing harder, as if that extra touch of dance music allowed them to stop staring at the stage and just let their bodies loose on the dance floor. It’s probably no accident that Amadou & Mariam are a frequently remixed by DJs for the dance floor, everything about their music works well for it.

The couple and their band have adapted their recordings for the stage amazingly well, considering the number of elements in the last few records that are not as easy to reproduce live consistently. They still have a dense, layered sound that touches on all the things that do make up their studio albums, and sometimes improves on it. “Sabali” still resembles the guitar-less Air inspired ballad on their 2009 album Welcome to Mali, but with added solos and Amadou’s guitar, it became more of a dark and luscious serenade, which morphed into another call and response section lead by Mariam and Dembelé, and finally back into French dance music territory. Afro-Caribbean rocker “C’est Pas Facile,” which on album features prominent vocals from British singer Ebony Bones, ended winding its way into a lively vamp on the chord progression and rhythm from “Louie, Louie,” exposing the original Caribbean roots of that song.

Amadaou & Mariam’s world funk easily allows anyone to enjoy their music, as long as you like to dance. That’s the only barrier to entry—not language, unfamiliar rhythms, or foreign instruments—but whether or not you dance.