The Indianapolis Museum of Art — selected to represent the U.S. at the 2011 Venice Biennale — will present the work of Jennifer Allora & Guillermo Calzadilla at the U.S. Pavilion, which will house six installations designed by the duo.

It’s the first time a collaborative instead of an individual has represented the United States at the festival. When the husband-and-wife couple was in Minneapolis for a Walker residency in 2004, I interviewed them on art, social change and works they were involved with around that time, including chalk likenesses of conquistadors that deteriorate when used on school chalkboards; shoe soles imprinted to leave messages behind for the U.S. military on the sands of the then-active Vieques bombing range; giant pieces of chalk left on the streets of Lima; and the charcoal dance floor installed at the Walker, which featured images of hip dancers that wore away as gallerygoers walked over it.

Of that last work, Allora explained:

The idea is that you would be walking around [on a floor drawing of dancers, rendered in charcoal that easily smudges underfoot] and looking at the different people, and as you look at the work, you inevitably step on the people who are dancing below. And, because we’re wearing these shoes that are part of this global commodity culture, people start getting branded with all those same things that are trying to make them feel like they’re different. So they’ve got Nike emblazoned on their face, and Adidas, and not only that but the actual shoes start to smudge all the drawings and instead of them being very clean and detail-ful, they become smudged and dirty and homogenized and erased.

Read the interview and my Adbusters story, “Insurgent Inquiry: The Art of Allora & Calzadilla.” 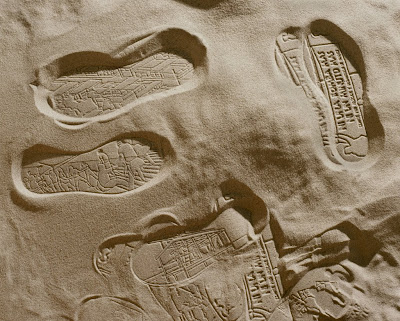 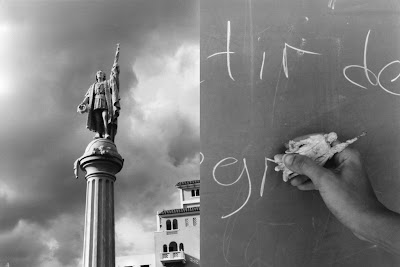 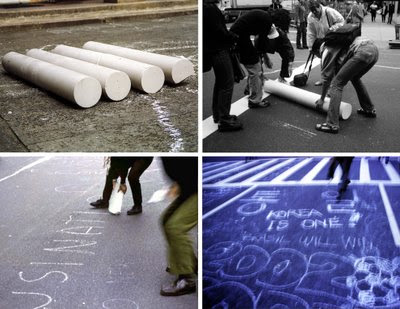