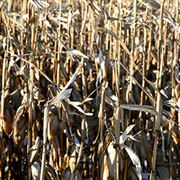 The old saying cited above is usually limited to love and war. The spreading drought across the nation reminds us that it applies to farming as well. Some farmers get nicked by drought every year; others get lucky.

Minnesota is the exceptional case in point this year.

In other words, most Minnesota farmers can expect to harvest good to excellent crops this fall while their colleagues across most of the major farm states are watching their fields dry up from lack of rain and blistering heat. The good fortune for Minnesota farmers will extend to the markets as well. Farm commodity prices have reached all-time highs in response to the drought.

When Roseau farmer and former Congressman Bob Bergland became Secretary of Agriculture in 1977, he told Washington reporters that he “never made an extra buck farming that didn’t come out of some other farmer’s pocket.”

That was true on Bergland’s first day on the job at USDA. It is definitely true this year in Minnesota. The high commodity prices will do nothing for the Iowa, Illinois, Indiana and Ohio farmers who won’t harvest a crop. It will apply to livestock producers as well who must buy expensive feed on the market to keep herds and flocks.

News reports say small dairy farmers in southern Wisconsin and a few other states have started liquidating their herds as they are running out of feed. Bergland said in a Tuesday conversation that this year will drive out most of what remains of the small herd dairy industry, including here in Minnesota.