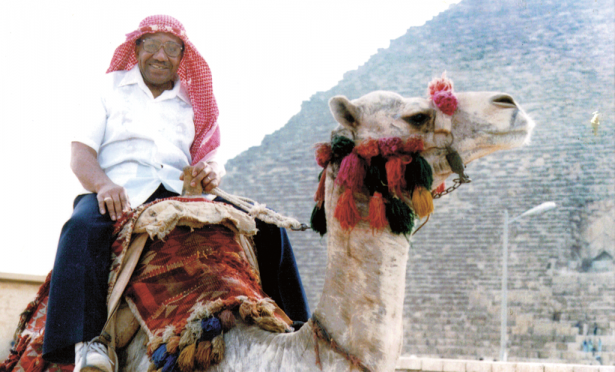 My dad James Melvin Young Sr. became a second generation “Red Cap Porter” when his uncle William A. Young retired circa 1949. Melvin was 23 years old when the Saint Paul Union Depot at 214 Fourth Street in Lowertown was the gateway to the world. Working there was the spark that ignited a love for world travel for my dad.

There were approximately thirty-six Red Cap Porters employed at the Depot, all African American. Their red caps became synonymous with integrity and reliability. Their work was demanding.

“We were never offered a clear job description,” Dad says, his voice unsteady. “One minute I was mopping floors (and other housekeeping duties) in the ‘head house,’ the next minute I was racing up to the concourse to meet passengers, carry their bags, then returning to the head house to trim the hedges, shine patrons’ shoes or the brass handles on the entrance doors, wash windows, work the elevator (license required) or park cars.”

Dad read the newspapers daily to be prepared to answer the unlimited questions travelers asked: “Where is the Convention Center? Where is an event being held?”

There are some pleasant recollections: “The tile work on the ceiling of the concourse was my favorite part of the depot.”

The Depot bar, Sugar’s, and Rossini’s sold food and filled the building with their unique aromas. “I still have a taste for Rossini’s German potato salad,” Dad recalls.

The men played checkers in their locker room during their lunch breaks. “The Red Caps sometimes pooled their money to help someone in the Depot out of a bad situation.”

My little sister at five years old and I, then eleven, would ride to work with Dad. Before he clocked in, he would buy tickets and put us on the Milwaukee Hiawatha Train, destination: Minneapolis, where we had moved. Riding unescorted made us feel special. We pretended to be movie stars traveling on the “Orient Express” looking for something exciting to happen. Our mom would meet us.

My dad’s passion for travel all began at the Saint Paul Union Depot. He aimed beyond what he saw with a child-like anticipation and a determination to make it happen.

There are painful memories too. The Red Caps were not immune from the racial issues of the times. Dad focused on the things he could change. Traveling the world became his “College without Walls.”

He fulfilled a personal dream to prove that “No matter what color skin a person happens to have, most people are honorable, empathetic, and deserving.” I nicknamed him the “Peacemaker.” He rode the rails from Saint Paul to New Jersey, to Washington State, California, to Quebec, through the Deep South and all the states in between, on vacations.

In 1969 he became employed as a skycap at the Minneapolis-Saint Paul Airport and began dreaming globally. He purchased custom shoes in Hong Kong, tailored suits in Korea, lived with new friends in the Fiji Islands, and participated in religious ceremonies in South America. He flew from England to Austria, and walked in wooden shoes in Holland. He rode a camel around the pyramids of Egypt and cruised the Ivory Coast.

My dad’s passion for travel all began at the Saint Paul Union Depot. He aimed beyond what he saw with a child-like anticipation and a determination to make it happen.

James J. Hill, railroad builder, and Charles Sumner Frost, the depot’s architect, dreamed of connecting Saint Paul to the rest of our nation. Their vision sparked James Melvin Young Sr. to make peace with new friends in every corner of the world.

Dad and Mom (Lois) are now retired and continue to travel.

May the Saint Paul Union Depot nurture dreams that come true for travelers for generations to come. All aboard!

Patricia Anita Young was born in Saint Paul and now resides in Minneapolis. She is an accounting technician who enjoys writing freelance articles.