This is the anniversary of the start of the first passenger-carrying railway, the Swansea-Mumbles Railway in Wales in 1807. The tracks were laid to move limestone and other minerals to the docks at Swansea for shipping. The idea to retrofit a horse-drawn rail car to accommodate people was revolutionary. People apparently enjoyed the trip – the line continued for just over 150 years and in addition to equine locomotion, passengers through the decades enjoyed traveling under power provided by steam, sails, and electricity.

The line was dismantled in 1960 when the railway was purchased by a company that wanted to run busses instead. That’s a familiar story for fans of the old Twin Cities Streetcar line. 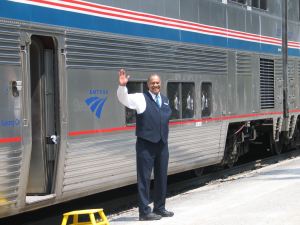 I’m an unabashed fan of train travel. My rail journeys have been much more memorable than any trip taken in a car (which is exhausting) or by air (which can be frustrating and ultimately demeaning). The relaxed pace, interesting scenery, friendly people and the freedom to move around a bit while underway are factors that make train trips civilized. At least until the engine breaks down or the toilet backs up.

And more rails are on the way. Not only is the Central Corridor Light Rail line just about a year out from starting, plans continue for the Southwest Light Rail Line (the Green Line extension), and light rail in the Bottineau Corridor.

That’s not all. The city of Minneapolis is having a serious discussion about streetcars, including a proposed route that would connect the city from north to south by going straight down Central Avenue, through downtown, and down Nicollet Avenue.

Then there’s lame duck Mayor RT Rybak’s latest pitch – beefed up airports in outstate Minnesota, linked to the Twin Cities with high speed rail. Why would Twin Cities bound air travelers choose to land at St. Cloud? Aside from the wonderful Stearns County hospitality, they’d get to take a cool train ride, of course.

When and where have you traveled by rail?