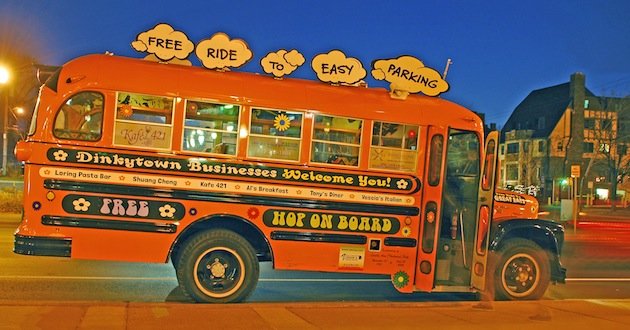 Sidewalks are shoveled, streets are well lighted, parking is convenient, and people are friendly.

Georgia Sander, owner of Kafé 421 at 421 14th Ave. S.E., said she gets three calls a day from people asking whether she’s still open. “When are they going tear your building down?” they ask.

Development projects in Dinkytown have received so much news coverage that many people don’t seem to realize that a vibrant community of small businesses continues to operate in the four-block business district adjunct to the University of Minnesota in Southeast Minneapolis.

“We are open,” Sander said. “The businesses are still here. People need to know that.”

Like Kafé 421, several other Dinkytown businesses say they’re not going anywhere. Sander and three other business owners recently discussed the special nature of Dinkytown in an interview. Despite construction, they said, Dinkytown is accessible.

These Dinkytown business owners want you to think of them as a small town within the big city. Minneapolis city planners have done a more systematic analysis of Dinkytown stakeholders that’s included in a draft of the Dinkytown small-area plan and market and historical analyses posted online.

Besides their popular sidewalk café in the summer, Sander and her business partner, daughter Antigoni McCloud, do catering and host private parties. Their business opened 10 years ago. “You can go to a corporate restaurant elsewhere but it won’t be the same experience,” said Sander, who posts weekly specials and offers students a 10 percent discount with an ID.

Eileen Vescio said her husband and his grandmother started Vescio’s Italian restaurant at 406 14th Ave. S.E. in 1956. “Two of our waitresses were there 40 years and another for 42 years when they retired,” she said. “One was with us 32 years. They don’t work for us, they work with us. They’re our restaurant family. They’re amazing.”

Skott Johnson said students often become family members when they work for small businesses. “A lot of businesses have taken parental role,” said Johnson in his last month after 24 years as owner of Autographics printing. “I’ve been downtown twice to bail people out of detox. A lot of businesses are that way.”

You won’t find that in a bigger corporation, added Mike Mulrooney, owner of Blarney Pub & Grill at 412 14th Ave. S.E. “It’s not in the manual anywhere,” he said. “You can’t do anything because the lawyer told you not to.” Mulrooney said he has kept in touch with former student employees.

During Gopher games, Mulrooney operates a big green Blarney bus to shuttle customers between Dinkytown and men’s football, basketball and hockey games at the University of Minnesota, beginning 20 minutes before the game. Those without tickets can watch on the 17 flat-screen television sets.

Dinkytown has the highest bicycle and pedestrian traffic of any place in Minneapolis, but people continue to drive to the area.

All Dinkytown businesses and property owners agree that parking is their greatest problem but that also is not as bad as the popular perception. “We had four cancellations in one day recently because people were driving around and didn’t find a parking place,” Vescio said.

“We have some options for parking, including valet parking and a shuttle service to a nearby University of Minnesota parking lot,” Sander said. People should call the restaurant for parking suggestions before giving up, she said.

Valet parking is available Thursday through Saturday evenings on Fourth Street next to the Loring Café and Pasta Bar at a cost of $3 for the first hour and $2 for each hour after that – a cost that compares favorably to downtown parking ramps.

St. Lawrence Church has a contractor managing a small parking lot on the corner of Sixth Street and 12th Avenue, about two blocks from Dinkytown. The contractor offers monthly rates and a pay box for those that need to park for a day, an evening or a few hours. The lot is reserved for St. Lawrence parish use on Sundays.

The University of Minnesota’s 4th Street Ramp parking ramp is seldom full and it’s at 1625 Fourth St. S.E., only two blocks east of Dinkytown. Rates begin at $3 for the first hour up to a $12 maximum for an entire day. Parking is $8 or $10 during certain events, which are listed online.

Creation of a shuttle bus to the 4th Street Ramp has added a colorful story to Dinkytown’s repertoire. Jason McLean, owner of the Loring Café and Pasta Bar and the Varsity Theater, purchased a 1962 International school bus , named her Lucille, added color and changed the seating arrangement for a fun ride.

But Lucille presented a number of challenges since it started last fall. After new brakes and a transmission, Lucile has returned to regular service on Monday through Saturday evenings. Lucille is supported by the Loring Café, Kafé 421, Vescio’s, and the Shuang Cheng Restaurant at 1320 Fourth St. S.E., but passengers boarding at the ramp or University sporting events aren’t asked to provide identification about where they’re going.

To contact Lucille, call a restaurant to schedule a pick up at the parking ramp. You can flag her down at a safe place to stop to catch a ride.

One of Lucille’s drivers, Sherri Faye, has a long-term Dinkytown connection. She has painted and designed a number of murals, including the one behind and inside the former House of Hanson building and on the Burrito Loco Bar & Grill.

In an interview, developer Kelly Doran questioned the need for the special-service district assessment that pays for snow removal, banners and Christmas tree lights.

Johnson said the district was created after the state improved Fourth Street, which is a state highway. Because Fourth Street was narrower than highway requirements, the state proposed widening the street to leave the sidewalk so narrow people would have to walk single file and the Varsity Theater marquee would stick out into the land of traffic. The Dinkytown businesses compromised with the state, promising to expeditiously remove snow to avoid impeding traffic.

The Dinkytown banners help foster a sense of community and the holiday lights improve safety, said Greg Pillsbury, co-owner of Burrito Loco. Several people said snow removal from the sidewalks was unreliable before the special district.

The Varsity Theater has become a popular destination, Mulrooney said. “When I want to know what the next big thing will be, I watch the marquee on the Varsity. Jason has a knack for attracting acts on their way to making it big,” he said.

Another popular destination is Al’s Breakfast, which is open only from 6 a.m. to 1 p.m. Monday through Saturday and from 9 to 1 on Sunday. Andy Conrad, who lives in Uptown, often visits Al’s for breakfast on his days off. Another visitor recently said that, although he may have to wait for a stool at the counter, he has little trouble finding a parking place when he visits Al’s around 7 a.m.

The shuttle bus Lucille will provide free rides from Dinkytown to the University’s 4th St. parking ramp and sports facilities.

Lucille, a 1962 International bus, waited outside the hockey arena during a recent game.

Sherri Faye, one of Lucille’s two drivers, is a returned Navy illustrator & graphic artist & a designer & muralist in Dinkytown.

Shuang Cheng (Meaning Twin Cities) Restaurant has been serving Cantonese food and seafood in Dinkytown since 1990.

The iconic Varsity marquee would have stuck out into traffic when the state highway dept. widened the street a few years ago.

Valet parking & the shuttle bus Lucille are available in front of the black sign on the side of Loring Café on 4th St. SE.