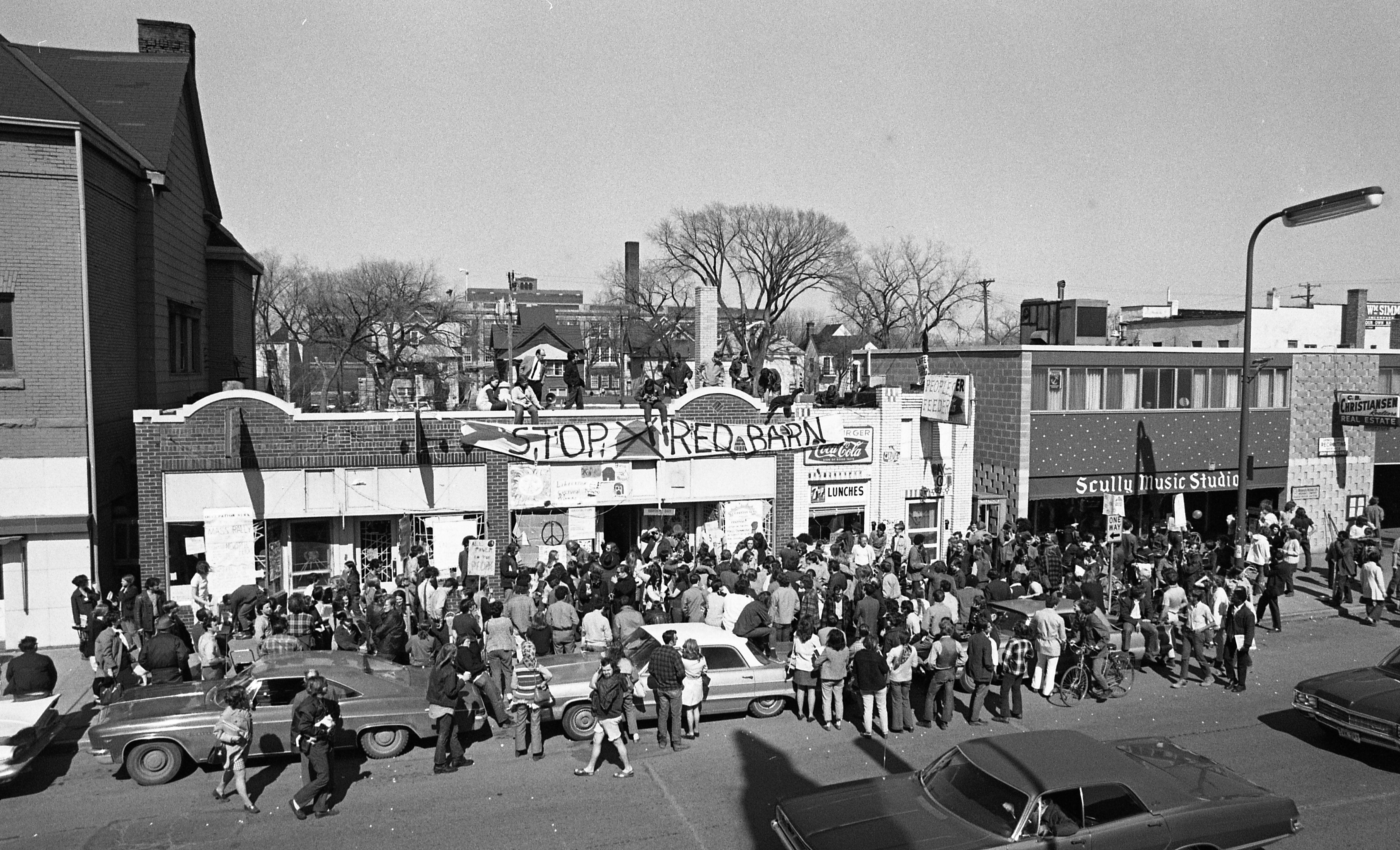 Protesters gathered in and around vacated buildings for a month in 1970 to prevent their demolition for the construction of a fast-food restaurant. Over the roof, you can see Marshall High School in the distant background a block away and some former Victorian homes that had been converted to businesses. Photo by and Copyright Cheryl Walsh Bellville.

Al Milgrom, who founded the first long-lasting film society in Minnesota, has become a filmmaker himself with his first feature length film, “The Dinkytown Uprising,” on the demonstrations to stop construction of a fast-food restaurant. [Link to great trailer: https://vimeo.com/121387504]

During the takeover, the protestors – some of whom were university and high school students – cooked their own food in the former diner, published their own newsletter, and created a “hotel” for staying on site, where one of Milgrom’s subjects admitted to losing his virginity. The film “Easy Rider” was listed on the marque of the Varsity Theater across the street.

In 1970, Red Barn, a chain that folded in the 1980s, would have faced competition in Dinkytown from Burger King, which went out of business in Dinkytown in the late 1990s, and McDonald’s, which has been in Dinkytown since 1960. Bob Lafferty, who owned five Twin Cities Red Barn franchises, met occasionally with protesters and Milgrom shows some tense but friendly banter between them.

With speakers on a megaphone in the background, Milgrom caught some of the personal exchanges. “You need fast food on a campus,” Lafferty said. “I think we do a good job.” Protest leader David Pence said people work at Red Barn for only $1.60 and hour. One guy said he probably couldn’t work at Red Barn with his long hair, and Lafferty said he’d require him to tuck it under his hat. Lafferty also offered to contribute to the creation of a central plaza and parking – perennial issues at the time – in Dinkytown.

With his 16 mm film camera, Milgrom followed the people who occupied the two buildings from which five businesses had been evicted to make way for a third hamburger fast food chain in Dinkytown. Over the years, he interviewed several key players to see where they are now.

By the 1980s, Milgrom had 50 cans of Red Barn film in his basement when he began transferring film to large video tape for initial editing and finally to digital video for computer editing with the help of fellow director and editor Daniel Geiger.

Milgrom has a long list of projects for which he’s already shot hours of video. He debuted a 27-minute documentary, “John Berryman Rediscovered,” at a conference on Berryman last November. Milgrom said he wants to help Minnesota remember Barryman, who was an internationally known Pulitzer-Prize winning poet and professor when he jumped to his death from the Washington Avenue Bridge on campus.

Milgrom, who had taught in the University of Minnesota humanities program with Berryman, said he hopes to turn the Berryman project into a full-length film.

“The idea is to capture lost memory,” Milgrom said. “The whole idea is of time and memory. I’m picturing the old timers to get their stories.”

He shot 30 hours of footage between 1976 and 2005 for a Czech Heritage Project that began with a polka band in New Prague. He screened a rough cut of the film under the title “From These Bohemian Shores” in New Prague last October.

He has begun recording monthly meetings of Vinkl, a small group of old-timers who sit in a corner of a Northeast Minneapolis bar and schmooze in Yiddish.

“I’m a first generation American,” Milgrom said. “I grew up in Pine City where my parents spoke Yiddish in the house. I remember all the spoken language. I don’t read it.” His parents came from Ukraine and Russian in 1918; his father had been drafted to serve in the czar’s army in 1914.

In 2010, he exhibited “The Bramble Experience,” a 16 mm documentary about the Northern Minnesota Russian community on public television and accessible on YouTube. In the 1960s, he worked on documentaries on rural poverty and Native Americans.

Milgrom entered the University of Minnesota in 1940, studying chemistry and journalism. He has worked as a journalist in Minneapolis and a teacher at the University.

“I had artistic ambitions. I got very interested in photography right off the bat,” he said. “Even at my advanced age, I’m still trying to figure out who I am.”

But most of Milgrom’s career has been in exhibiting film. He founded the University Film Society in 1962 and led it for 50 years to exhibit non-Hollywood films that might not otherwise make it to the Twin Cities. He became interested when foreign films came to the United States in the 1940s and in the French New Wave filmmakers in the late 1950s.

“One of my motives for the film society was because all these new films are not shown here,” he said. “You had to go to San Francisco or New York to see New Wave films. So I formed the film society with some other film buffs.”

His own filmmaking grew from this interest. “Many of these filmmakers took film as another form of authorship. That appealed to me. Picking up a camera and getting into film along with photography was a strong motivator.” But a fire destroyed the negatives he had made as a student.

The University Film Society eventually expanded its tent to cover the Twin Cities. Milgrom began numerous film festivals, including the Rivertown Film Festival in 1983 that has become the Minneapolis St. Paul International Film Festival, MSPIFF. Along the way, he has introduced thematic programs, including a Jewish Film Festival, and he emphasized Polish films for which he received a medal from the Ministry of Culture in Poland.

Milgrom’s film, “The Dinkytown Uprising,” will premiere at 6 p.m. April 12 and 2 p.m. April 20 at the Minneapolis St. Paul International Film Festival among more than 200 films this year at the St. Anthony Main Theater in Southeast Minneapolis. [Link: http://mspfilm.org]