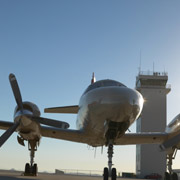 Minnesota’s St. Cloud and Blaine airports won’t be seriously affected by pending closures of their control towers due to federal sequestration spending cuts, local officials say. Nine out of 10 U.S. airports already operate safely and efficiently without towers, and the scheduled closures of 149 across the country were based on their relatively low traffic levels.

Former Minnesota U.S. Rep. James Oberstar, never one to shortchange transportation funding, told the Associated Press that regional air traffic control facilities like the one in Farmington can handle most of the needs of aircraft using small airports. In addition, most pilots are well trained and experienced at handling uncontrolled air space.

“The hoopla about 149 towers being cut I think is misplaced,” Oberstar, former chairman of the U.S. House Transportation Committee, said. “I’m rather skeptical about those crying wolf.”

Not surprisingly, those doing the crying include some so-called “fiscal conservatives” in Congress and, of course, the trade association for 251 private contract tower operators who collect $140 million a year from the Federal Aviation Administration. The former have introduced bills to stop the closures and the latter has filed suit. The FAA itself has fed the insurgency with 30-year-old data overstating current safety risks.

The reaction from St. Cloud and at the Metropolitan Airports Commission, which operates the Anoka County-Blaine reliever airport, has been much more measured.

“We will be less safe without the tower,” Bill Towle, director of the St. Cloud Regional Airport, told Minnesota Public Radio. “We’re not going to be unsafe.”

Patrick Hogan of the MAC said the Blaine contract tower “adds an extra layer of safety” and its loss could push some of its 79,000 annual landings and takeoffs to the nearby Crystal Airport, which has an FAA-operated tower for just 44,000 yearly operations. But even though the Transportation Security Administration has reversed an overtime ban that caused 200 passengers to miss planes at Minneapolis-St. Paul International Airport, other nationwide traffic control cuts at major airports could affect many more people flying from MSP, Hogan added.

One reason for the muted concern about the Blaine closure is that operations at the MAC’s six reliever airports have plunged from 800,000 a year a decade ago to less than 400,000 now. That’s been driven by the end of GI Bill benefits for flight training, fewer aviation hobbyists and broader economic woes, Hogan said. Nationwide, there’s been more than a one-third drop in the rate of general aviation accidents since 1983, and not a single commercial airline fatality in four years.

Furthermore, at both St. Cloud and Blaine, many takeoffs and landings occur safely during night hours when the towers are not staffed. Blaine has recently improved its instrument landing lighting system to help at those times.

Both airports slated for contract tower closures fell well short of FAA thresholds for continued service: 150,000 total annual operations or 10,000 commercial ones. St. Cloud has about 40,000 a year overall and barely 100 commercial.

“Airports operate safely throughout the United States with and without towers,” the FAA noted, adding that the 149 towers on the chopping block “did not meet the national interest screening criteria.”

Some airports in other states are seeking local or state funding to keep towers open. That doesn’t appear to be on the table in Minnesota. Nor should it be, given the high level of government support for our airports and executive jet setters. Meanwhile, “fiscal conservatives” should start regarding redundant aviation facilities with the same budget-cutting zeal they reserve for so-called “entitlements.”