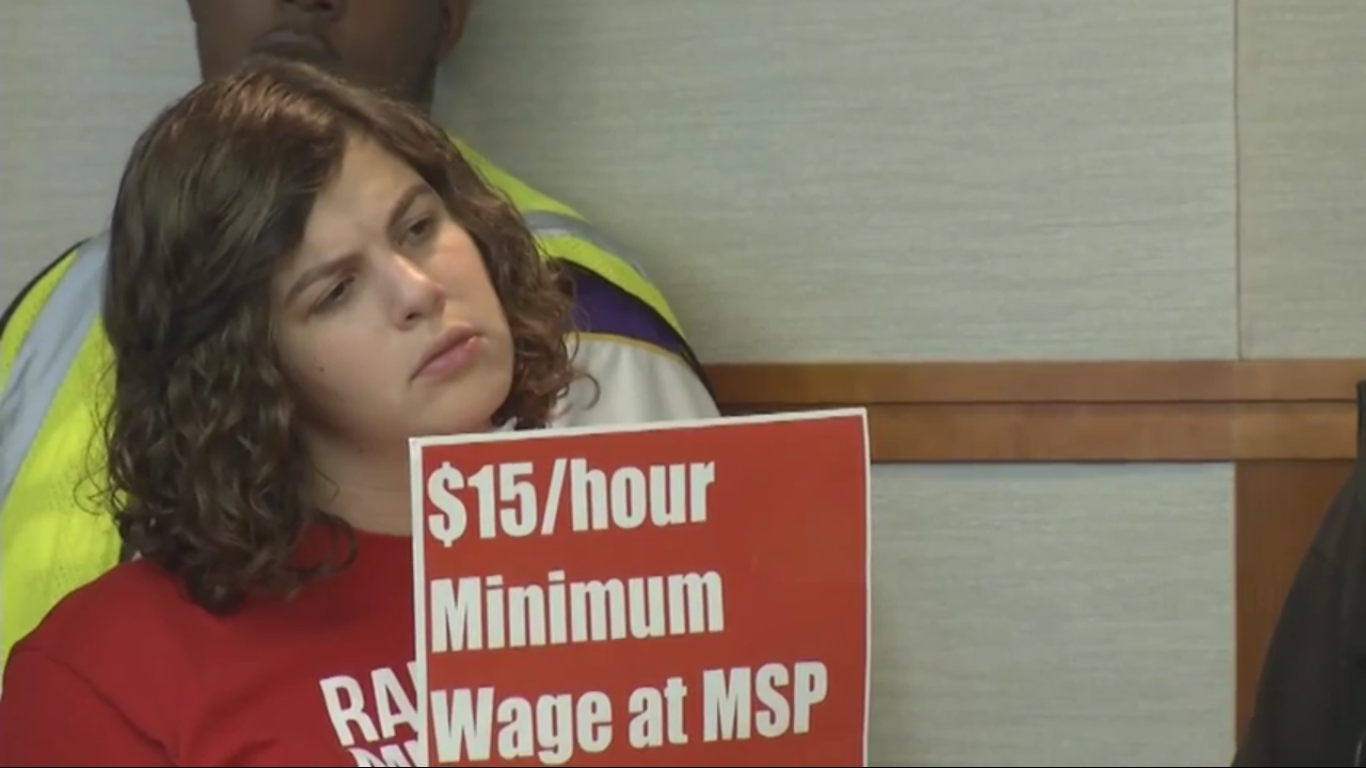 (Screenshot taken from video by Labor Education Service, below)

Workers at airports across the country have raised their wages to a minimum of $15 an hour and sparked wage increase campaigns in nearby cities. After Sea-Tac workers in Washington won a ballot initiative to raise their wages, a mobilization in nearby Seattle succeeded in passing a $15 an hour minimum in that city. Workers at the Los Angeles and St. Louis airports also won minimum wage increases. Workers at the Minneapolis-St. Paul Airport are organizing to do the same.

Airport workers with 15 Now Minnesota members and supporters testified at the monthly meeting of the Metropolitan Airports Commission on Monday. They spoke to keep up the pressure on the body to raise the wages of thousands of MSP workers, who now make wages at or only a little above the current $8 an hour Minnesota minimum. Followng the comments to the commission, advocates marched through the airport and rallied accross the road from the terminal.

At the September meeting, 15 Now presented a thousand petition signatures to the commission in support of the pay increase. The group is also meeting with airport officials and political leaders to realize their goal. They aim to make the MSP airport a catalyst for higher wages throughout the Twin Cities metro area, as Sea-Tac inspired the increase in Seattle.

During the commission meeting’s open forum on Monday, five people spoke in favor of the $15 an hour minimum. Speaking in opposition, Frank Lorenz stated that, while he was concerned about the destabilizing effect of low wages that could not support families, raising the wage to $15 an hour would bankrupt airport businesses and lead to inflation. 15 Now member Chris Gray responded that the profits earned by Delta and other airlines through the airport could more than offset the increased wage costs. He questioned why increasing the pay of poverty level workers is considered inflationary, when the spiraling economic effects of management salaries are ignored, citing that Delta CEO Richard Anderson earns $14 million a year – $6,000 an hour.

Kip Hedges, a Delta baggage handler who helped initiate the 15 Now airport campaign, observed, “Many of Delta’s workers live in poverty, and Minnesota taxpayers are forced to pay the difference with food stamps and other social services.” He and fellow 15 Now advocates are collecting signatures to urge Governor Mark Dayton to support the higher minimum wage at the airport, as he appoints the members of the MAC and his stance is expected to carry weight with them.

In another harbinger of the growing activism of low-wage airport workers, 200 Airserv employees, organizing with the Service Employees International Union brought operations to a halt at LaGuardia Airport in New York in a strike last Wednesday to protest poverty-level pay and the lack of equipment to protect themselves from Ebola.

The agenda and a video of the entire Oct. 20, 2014, Metropolitan Airports Commission meeting are available on the MAC website.

For additional information on the 15 Now Minnesota airport campaign, visit their website.