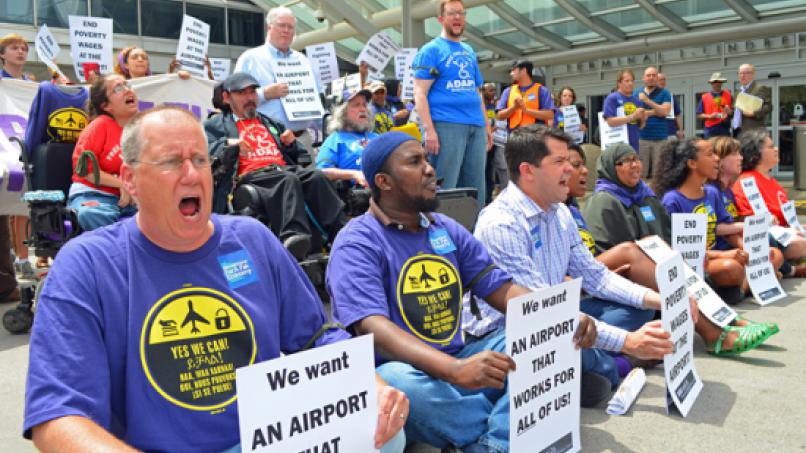 A demonstration in support of low-wage workers who assist Delta Air Lines’ operations at Minneapolis-St. Paul International Airport began at today’s meeting of the Metropolitan Airports Commission (MAC) and spilled into the roadway outside Terminal 1’s ticketing area, forcing lane closures and resulting in 13 arrests.

The protest targeted low wages, under-staffing and other poor working conditions that, according to a report released last week, make travel more difficult for elderly passengers and those with disabilities.

“I’m embarrassed about the way we treat passengers and how long they have to wait for wheelchairs and electric carts,” Darcy Landau, who works as a wheelchair agent serving Delta passengers, told commissioners during an open forum before the MAC’s meeting. “Passengers get frustrated. It makes them feel like they’re not important. It’s discrimination, and that’s not right.”

Airlines usually outsource passenger services to subcontractors that change as bids to service an airport are won and lost. But as their employers change, workers remain stuck in a cycle of low wages.

Abera Siyoum, a wheelchair agent employed by Delta’s latest subcontractor, Airserv, attended the MAC meeting between his morning shift at MSP and his second job. “Like many of my co-workers, my family cannot survive on what I make at this job alone,” Siyoum told commissioners.

Siyoum acknowledged that fatigue from working two jobs, coupled with the stress of rarely seeing his wife and two children, takes a toll on the service he’s able to provide for passengers who rely on wheelchair and electric-cart services.

“I don’t get enough sleep. I am stressed about being able to pay my rent,” he said. “It makes it hard sometimes to do my job.”

Siyoum, Landau and other Airserv employees at MSP are working to organize a union with Local 26 of the Service Employees International Union.

Local 26 already represents janitors at MSP, who are employed by Airserv’s parent company, ABM, and it’s not hard to see why passenger-service workers want to form a union too. While ABM pays its union employees at MSP average wages of $14 per hour with benefits, Airserv pays average wages of $8 with no benefits.

Local 26 President Javier Morillo called on the MAC to follow the lead of airports in Boston, Los Angeles and Fort Lauderdale by passing a “labor-peace policy,” which would make it easier for workers to form and keep a union as Delta shifts contractors at the airport.

After the open forum workers and their supporters, including several members of the disability-rights organization ADAPT, marched and wheeled themselves out of the MAC chambers, through the terminal and onto the road outside the ticketing area.

As police watched and a crowd of supporters chanted slogans, eight protesters sat down in the street, backed by three ADAPT members in wheelchairs and two more people standing behind them. All 13 were arrested for blocking traffic.

The civil disobedience follows last week’s release of a new report, “Able, But Not Willing,” that finds passengers with disabilities face continued problems at MSP – problems workers and ADAPT members pledged to work together to solve.

Earlier, airport commissioners listened as ADAPT leader Darrell Paulsen, who was among those arrested, recalled watching workers drop his then-pregnant wife, Nikki, while transferring her from a wheelchair to her seat on an outgoing plane at MSP.

Paulsen urged commissioners to consider whether their mission was to “make Delta millions of dollars in profits” or to ensure dignity for all travelers. “If you believe in dignity, it is time for you to take action,” he said.

Delta, in particular, has a track record of failing to serve its ticketed passengers with disabilities in accordance with federal law, according to the report, which found that Delta was fined twice in the last 10 years by the Department of Transportation.