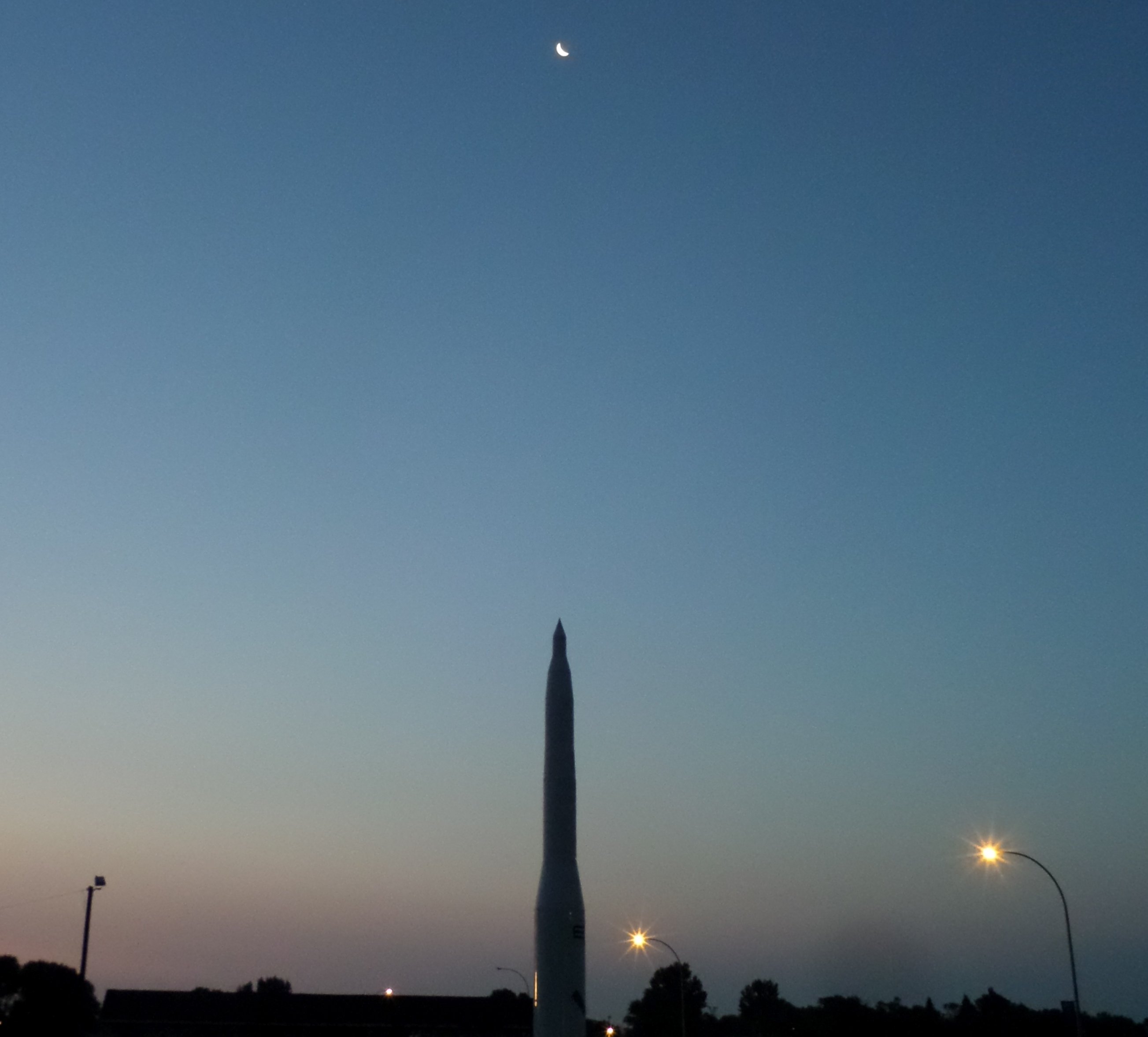 Early Wednesday morning, August 21, I was heading out for coffee from my motel in LaMoure ND, and a sight begging to be photographed appeared a few steps to my left, and I couldn’t pass on it. Here’s the snapshot. The waning moon appeared to be in the “bullseye”.

I’m very familiar with the sight: I stay often at this motel. August 10, on a previous trip, I’d taken a photo of the permanently on display Minuteman Missile you see in the photo. But this one, with the moon as the bullseye, was unique. I just looked up the Phase of the Moon I photographed that day: here.

More about this missile at the end of this post.

My trips to LaMoure, these past months especially, have always been work, both physical and emotional. I go into a “news blackout”, basically, too busy to read a newspaper; too tired to even watch TV news. So it wasn’t until I arrived home late on the 21st that I learned of the decapitation of the American journalist in Syria by an ISIS person with a distinctly British accent; and I saw the image of some ISIS hotshots showing off with some American tank, either purchased or captured in Iraq and now part of the ISIS arsenal.

Suddenly our omnipotence does not seem so potent. The radicals in ISIS seem far more dangerous and ominous than al Qaeda a few years ago, essentially thumbing their collective noses at us, using our own weapons and tactics, and we can’t do a thing about it. So we debate around the edges of the true reality, which is we can no longer control the world, and our past actions have consequences. We now debate on whether or not we should pay ransom to rescue captured journalists or others, and we face the prospect of dealing with shadowy enemies who look and talk just exactly like us. (America is heterogeneous, should anyone not have noticed.)

This is a very complex situation in which we find ourselves, even worse than our no-win Iraq adventure which began in 2003 with bragging that we had won that war less than two months into that awful and deadly and endless conflict (which still continues).

We now have to live within the world which we have made.

When I got home this week, I decided to review the history of the Minuteman Missile, which was a creature of my time in North Dakota. 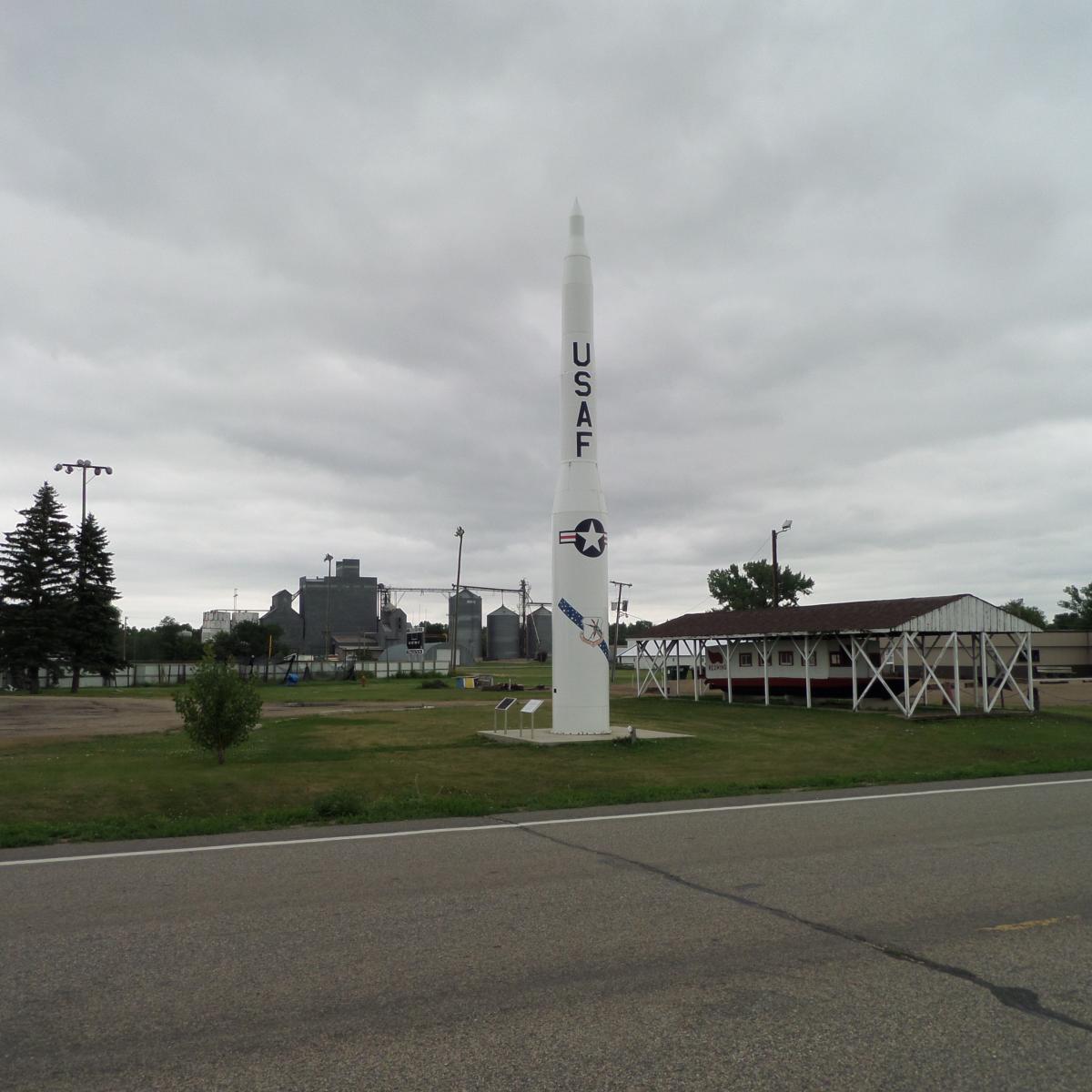 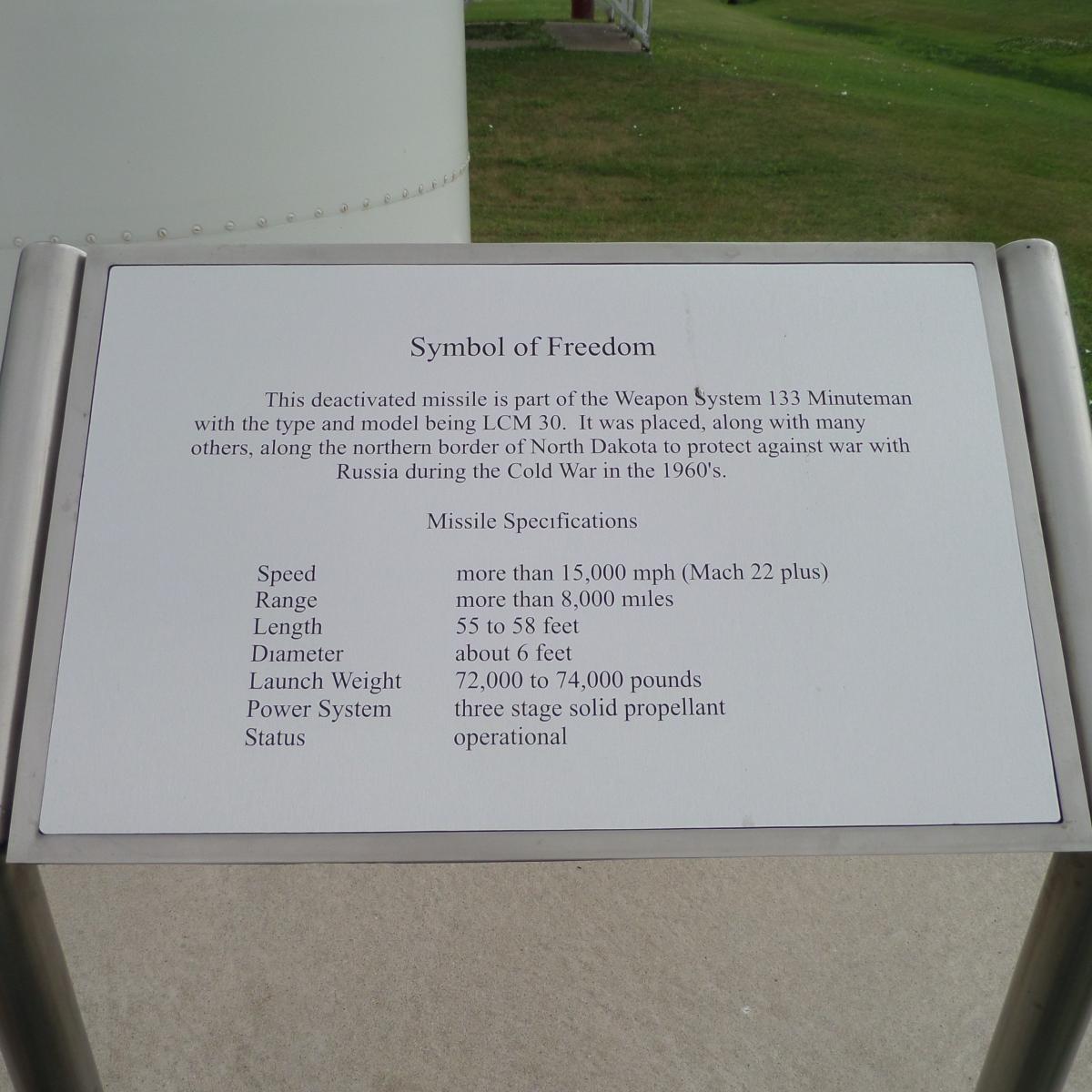 We Americans love our weaponry: the Biblical “Ploughshares” doesn’t seem to have a chance against “Swords”. We’re so strong, armed so well, peace runs a far distant second to the advantage of overwhelming military superiority – or so goes the conversation. Look for Monuments to Peace in your circuits. And to War. And see who wins. (One organization I support whose sole mission is a Peace Memorial is here. Check it out.)

The Minutemen were children of Presidents Eisenhower, Kennedy and Johnson during the Cold War, and were planted between 1961-67 in the heat of the Cold War (Reagan was in office much later, 1981-89).

When you’re talking man-up, whose name is attached to manning-up matters, I guess.

I see lowly ploughshares memorialized from time to time, but they’re seldom named for a person, compared with war memorials, they are minuscule in number.

Actually, all the military toys ought to be dedicated to “we, the people” who fund, and indeed have insisted on their development through our Congress, which by action (or inaction) authorizes endless war and military investment.

(Changing this reality is not simple: for instance, my Grandmother on the ND farm 10 miles from that Missile in the photos, was joyful when the A-Bomb was dropped on Hiroshima in 1945(Atomic Bomb 1945001). Her bias was her son, an officer on a Destroyer in the Pacific. She wanted him home safe. The U.S. War Department, then, rhapsodized in public relations releases that this deadly bomb might be the key to ending war forever.

And Saturday night I was at a Minnesota Twins baseball game with a family group which included my granddaughters father-in-law. He’s a great guy. Much of his career as an Air Force enlisted man was making sure those ND Minuteman sites were secure….)

As a country we have supported these symbols of our supposed omnipotence, without regard to partisan designation. It is dangerous for a politician to speak against War.

Now a few countries, especially the U.S. and Russia, are awash in nuclear weapons which, if ever used, even one, by some lawless renegade leader or thief, will take a long step towards mutually assured destruction of everyone downwind.

The conventional wisdom back then, that our strength was in military superiority, was not only wrong, but stupid.

We’re in a hole of our own making, and best that we figure out it’s worth our while to not only stop digging, but try other means of co-existing.

We’re part of, not apart from, a much bigger world than just within our borders.

Change can happen, but it always happens slowly. Be the one person who is, as Gandhi said, “be the change you wish to see.”