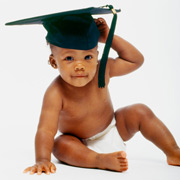 Most of us are familiar with the ready-aim-fire idea, as well as the fire-ready-aim variation about taking action before preparing. When it comes to Race to the Top (RTTT), however, we seem to have fallen into a new pattern: aim-ready-what?

See, RTTT asked states to set their own goals for education. Some were modest – New York is looking to reduce its achievement gaps by a few percentage points – while others were incredibly ambitious – Maryland wants to completely eliminate any achievement gap by 2014.

Goals are a big deal in education reform, and they certainly have their place. Lacking direction doesn’t do us a whole lot of good. Unfortunately, we can’t seem to settle on what our particular goals should be. Obviously, the achievement gap is a big deal (though focusing education policy primarily on the achievement gap has drawn its own criticism of late), but even there we struggle.

We’ve become accustomed to defining the achievement gap in terms of math and reading test scores, with science also making the cut some of the time. This particular focus, however, too often leads to school policies aimed solely at boosting test scores rather than addressing underlying issues in achievement. What’s more, areas that don’t get tested – which surely have their own achievement gaps – don’t get the same attention.

There’s also a question as to how soon the achievement gap should be closed. Maryland’s goal of 2014 seems preposterously soon; three school years is almost certainly not enough time to get inner Baltimore testing at the same level as Montgomery County, one of the best-scoring school districts in the country.

While states have put a lot of effort into defining their goals and the measurements for them, execution is starting to prove more difficult. Part of this may be the result of RTTT’s many policy guidelines and relatively low support for follow-through. States have set goals for themselves and built an initial policy framework for meeting them, but now that they’ve aimed and readied themselves, some blank looks are starting to crop up.

Minnesota deserves its own discussion of education goals and ought to look into what it will take to actually make those happen. We should do this on our own, independent of the RTTT parameters. If what we decide is best for our children coincides with RTTT, we should by all means apply. Otherwise, we should resist getting drawn into the aim-ready-what? trap.