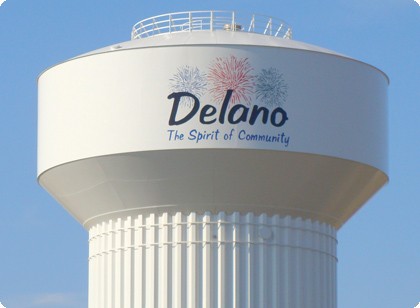 The City of Delano in Wright County is a fairly typical Minnesota community.  With a population just more than 5,000, its per capita tax base and average household income is close to the average for all Minnesota cities.  Its per capita expenditures are also close to the statewide average.  And like nearly every other Minnesota city, it has experienced large cuts in revenue from the state and large property tax increases over the last eight years.

The following analysis will focus on Delano’s “revenue base.”  As defined in state law (Minnesota Statutes 2009, 477A.011, subdivision 27), the revenue base is the sum of city property taxes plus local government aid (LGA) and market value credits (MVC).  Revenue base is a commonly used proxy of city spending and is frequently used as a basis for apportioning aid cuts and setting property tax levy limits.

Since 2002, the state aid and credit portion

of Delano’s revenue base has fallen from approximately $198 per capita in constant 2010 dollars* to zero in 2010.  Figure 1 shows the steady erosion in the revenue that the State of Minnesota shares with the City of Delano.

State policymakers decided to resolve a disproportionate share of ongoing state budget deficits through large state aid cuts to local governments.  In fact, cities and other local governments have endured bigger cuts since 2002 than state government, as a percentage of total revenue.

Property tax increases in Delano were not sufficient to offset the decline in state aid from 2002 to 2010; as a result, the real per capita revenue base of Delano declined at the same time that city property taxes climbed, as illustrated in figure 2.**

Delano’s trends roughly resemble those of all Minnesota cities, shown in figure 3.  As a result of state aid cuts, real per capita revenues of cities have fallen at the same time that property taxes have shot up.

State aid cuts have put local elected officials in the unenviable position of having to raise property taxes and the same time they are cutting city budgets.  To confirm this, ask former

Indeed, it would be unfair to blame Council Member Emmer for the 16 percent property tax increase that he supported back in 2003.  After all, the analysis presented above supports his contention that the increase in property taxes was not going to pay for more city spending, but to backfill a hole left in the city’s budget as a result of large aid cuts that Governor Pawlenty pushed through the state legislature.

While Council Member Emmer should not be faulted, Rep. Emmer certainly can and should be.  While in the House of Representatives, a compliant Emmer went along with Pawlenty aid cuts that forced Minnesota’s local governments to approve both property tax increases and budget cuts–just as Emmer himself was compelled to do back in

Now gubernatorial candidate Emmer is telling us that he wants to continue the policy of cutting state aids and credits.  And he would have us believe that today’s local elected officials will not do the same thing that he did back in 2003: increase property taxes to recoup at least a portion of lost state aid.

Given that the per capita spending of Minnesota cities and the per pupil revenue of Minnesota school districts are already below the national average, there can be no doubt that local elected officials will be compelled to replace a significant portion of future aid cuts with still more property tax increases.  If you don’t believe us, just ask Delano City Council Member Tom Emmer.

2020 Property Tax Report: 2002-2010.  Click here for an online supplement to the report with similar information for all Minnesota cities with a population over 5,000.