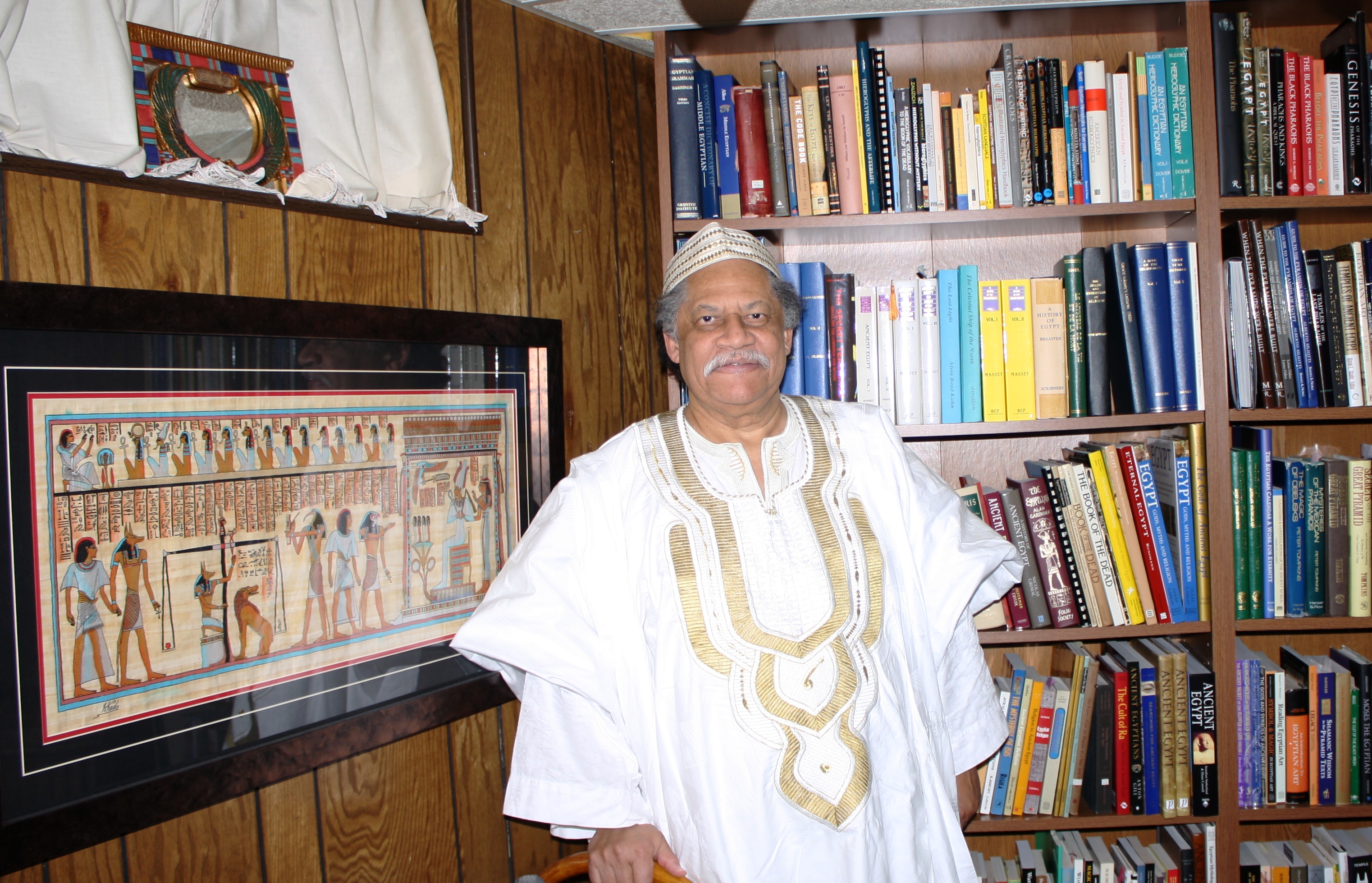 Ahmad Azzahir was born in Grenada, West Indies, where the warm tropical setting makes a person aware of the sun. “You get up with the sun and the morning is bright… So there is a kind of joy, it doesn’t matter how poor you are. So as a kid I grew up poor, but outside all the time, played.”

In his early 20s, Azzahir left Grenada to pursue an education. Leaving for the U.S. or Canada represented opportunities for a better life. Staying meant working on a plantation for small wages.

Azzahir first came to the U.S. in 1965, but left in 1967 for Canada. During that time, he says, Canadian culture was more in tune with ecology than the U.S. In a Canadian University he studied “the relevance of time dimensions to community development,” he says, which led him to study Egypt, or as he refers to it, Kamet.

“[Egypt] had the potential — it had the possibility — to develop technologically,” he explains. “The pyramids are a technological institution… So it could have accomplished what the West has accomplished. What prevented it from going in that direction?”

Before Greek influence, Kamet offered all the disciplines we study today: medicine, astronomy, earth sciences, mathematics. “The pyramid is a mathematical creation,” Azzahir says. “If you go to a place like Thebes, where they have these majestic buildings…the temple of Canaat, there is no other architectural creation on the planet that is like that.”

The year 1984 brought Azzahir to the University of Minnesota, where he studied in the department of education. “My interest was more development from a third-world perspective, like how countries like Nigeria [or] Tanzania will develop into the future… What is their educational plan at a national level to develop the country?”

Azzahir, heavily influenced by his non-industrialized upbringing, approached his studies differently than his colleagues. “You’re really required to be steeped in your own cultural tradition if you’re from the third world, and the people growing up in the United States and Canada are not used to that kind of thinking. As a matter of fact, their whole trajectory is to move away from it.”

In his childhood, mythical concepts governed behavior, while in the United States, with its European-based culture, “Whatever you can innovate at the technological level, you do. You don’t even ask questions in regard to what…future impact it is likely to have on the planet… Only now [that question] is surfacing as you deal with global warming.”

In late January, Azzahir was invited to give a presentation for a group of nine-year-olds at his granddaughter’s elementary school. His goal was to give the Black children something they could identify with.

Over the years, he has worked closely with the Cultural Wellness Center in Minneapolis through his wife, Atum Azzahir, its executive director. He conducted classes with children and adults at the center that began with drawing a hieroglyphic “A”, which is a bird, and a Latin letter “A” side by side. “I did that very deliberately, because…they are two different thought processes,” he says.

When one looks at the hieroglyphic A, if they have ever seen a bird before, they bring their own interpretation, while the Latin A has an “artificial meaning.” First-time viewers rely on an outside interpretation to give it meaning.

The warm Grenada sun and his third-world roots have not yet created a strong enough pull for Ahmad Azzahir to return to his homeland. Living in Minnesota now for almost 30 years, he stays because he feels he has a mission.

The mid-’60s and desegregation wove African Americans more tightly into the European-American culture primary, Azzahir believes, through the education system. It is the educational system that produces most leaders in the U.S. and abroad.

“These are the people who now give leadership to the Black community. A lot of them are disconnected from the soul… All they see at this time as a career is through that educational system.” Though the system creates leaders, he believes it comes at the price of self-destruction.

“When I say suicide, I mean that in a kind of cultural way, to imitate and follow what you call the technologically developed societies, Western societies. So that you are in no better position to guide or give leadership to your people.

“You’re always waiting for somebody to tell you what to do that is outside of your culture, outside of your experience,” presenting the same challenge of interpreting a Latin versus a hieroglyphic “A”.

At age 70, Azzahir has now retired from 21 years of teaching at the International Kepheran Institute, which he founded, operated and taught in for 21 years in the basement of his home, trying to offset the damage to Black children in the public school system. His mission is to create schools based on African philosophy in locations around the world.

“The conversation is about mental health… If a people lose meaning, then life doesn’t offer anything for you to be valued, and so taking life, it has no meaning…

“And so you have to consume, everything is based on your capacity to consume… And on the inside you are empty and hollow…The African has gone through that experience for 500 years [and] can accurately speak to it, and speak to it from a place of soul.”

Azzahir believes that the world is ready to gravitate toward an African-based philosophy, and his mission is to prepare Africans through the International Kepheran Institute around the world.

“This is the time, and there are so many things pointing that way that Barack [Obama] is just part of… That’s where I see the Spokesman and institutions like that. They have a conscience; can they give us a vision?

“Because if you don’t put the vision in place, we will self-destruct.”