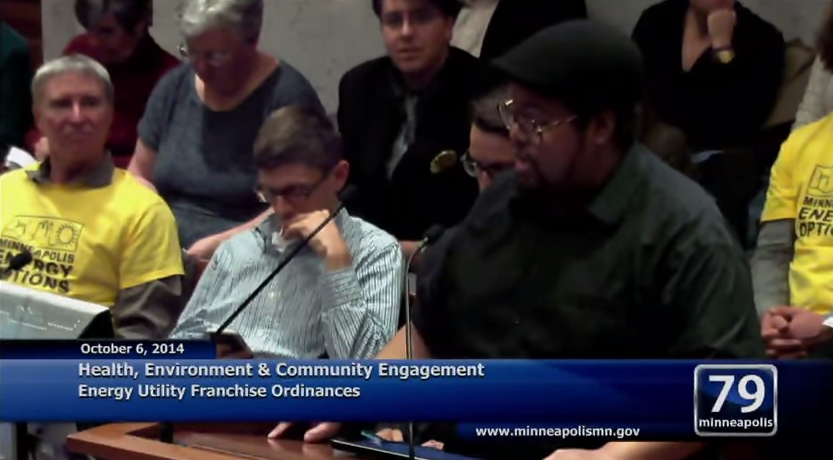 On Oct. 6 a public hearing took place at City Hall to review tentative utility franchise agreements reached between the City of Minneapolis and utility companies Xcel Energy and CenterPoint Energy. The agreements, if approved by the Minneapolis City Council on Oct. 17, would set in motion a first-in-the-nation, public-private “Clean Energy Partnership.”

Proponents said the partnership between the city and utility companies would aim to meet the city’s goals of reducing greenhouse gas emissions and make energy more affordable, reliable, efficient and renewable, as laid out in the city’s 2013 Clean Action Plan.

The previous franchise agreements between the City of Minneapolis and utilities were made 20 years ago, and are set to expire at the end of 2014; the agreements mostly covered public right of way issues. The city utilized negotiations for new agreements to advance its energy goals with a short term five year minimum, 10 year maximum, and potential to renew for up to 20 years.

Betty Tisel was one of several community leaders and activists who spoke at the Oct. 6 public hearing. Tinsel expressed her approval of the partnership and spoke in favor of keeping the agreements short term. “Please keep the agreements as short as possible in order to have flexibility in the event of new technologies, lowered costs of renewables, or new challenges brought about by climate change” Tinsel said.

You can view the Oct. 6 public hearing in its entirety at the clip below:

Clarification: Additional language was added to clarify that proponents of the partnership said it would help the city meet it’s 2013 Clean Action Plan goals.