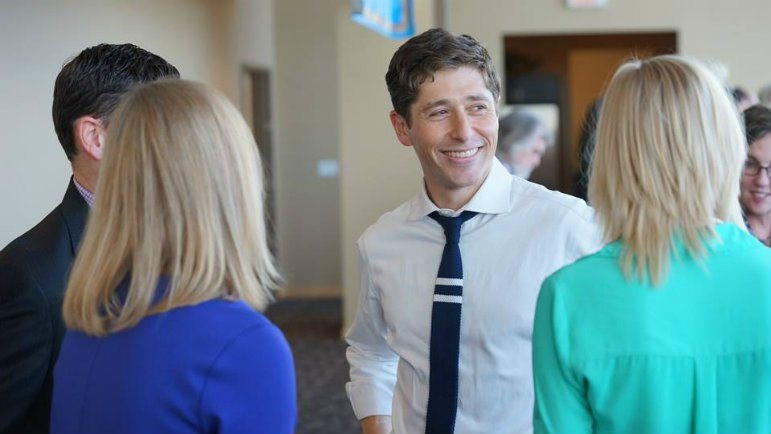 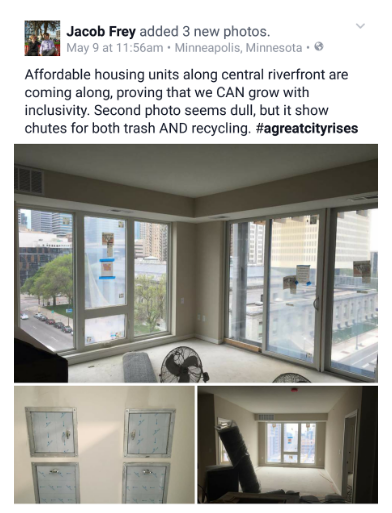 After reading the post, I entered an all too familiar feeling, divorced from the realities happening in my hometown. Frey, like many of his colleagues, unveils Minneapolis as the classic shining city on the hill, with the use of the “#agreatcityrises.” Yet, speaking as a Minneapolis native, housing organizer and woman of color, I know this could not be any further from the truth experienced by indigenous and communities of color.

Let’s be real now. Affordable for whom?

In Frey’s Facebook post, he replied to a comment by saying the development pictured would be “affordable” to residents earning 50 to 60 percent of the area’s median income, which means households earning about $33,000 or less would qualify.

Frey followed up the comment on his post by saying, “Clearly we need more deeply affordable housing also.”

Under Frey’s leadership in Ward 3, about 70 percent of redevelopment in the city is and has gone underway in his jurisdiction. Properties all over the North Loop (formerly known as part of North Minneapolis) and Northeast Minneapolis continue to gentrify. The increase in redevelopment is not uncommon as Frey’s ambitious plan is to “put Minneapolis on the map.”

But, these plans have a significant and negative impact. As new populations come in and take advantage of new housing and business development, existing communities are pushed out.* And, unfortunately, a disproportionate amount are communities of color. Owners and landlords insidiously abuse their power to use discrimination, retaliation and intimidation as tools to relentlessly force tenants to discontinue their lease and impose evictions. All in efforts to accommodate the young, white, suburban transplant thirsty for urban living.

Let’s put this clearly: the vision of #agreatcityrises is NOT equitable for every Minneapolis resident. Period.

Historically speaking, Minneapolis neighborhood associations and parks and recreational boards consist of primarily one demographic: white, affluent or middle-class family homeowners. They work closely with the city and intentionally ignore the concerns of the renter population. Strong regulations, codes, and policy objectives surrounding land use, housing, economic development, and livability have favored this demographic without the involvement of historically marginalized and disenfranchised communities.

Take for instance the master development plan in the Marcy-Holmes neighborhood, also under the jurisdiction of Frey. Current objectives are solidly paved to preserve and expand the number of single family homes; and converting existing, “problematic” rental properties to condominiums in efforts to accommodate faculty, staff and a growing number of students attending the University of Minnesota. In neighborhood association meetings, absolutely nothing is being said in support for the preservation of existing affordable housing, like Holmes Park Village Apartments and Townhomes, an existing affordable housing complex that provides project-based rental assistance to seniors, differently abled, individuals and families of color. Many residents regard Marcy Holmes neighborhood as their home. Safe and convenient for them to access core resources like groceries and public transportation on Central Avenue. The subsidy contract between the owners and the government is nearing its deadline in 2019.

What is being done to ensure current residents are not displaced from a community they call their home? So far, absolutely nothing has been said about the preservation of existing subsidized housing programs in the neighborhood.

So, when Frey boasts affordability and inclusivity, what does he mean? How much does it cost to build this new housing? What is the selection criteria? Will there be a proportion of subsidized affordable housing units in this complex? What about policies implemented to ensure affordable housing for Latino communities? Are they eligible to have access to this, what you say, “affordable housing”? What will be the average size of these units? Will it be appropriate for multi-generational families of color? What is the expected rent? What is the minimum income can a resident apply for housing?

Let’s get straight to business, exactly who is the target market? The pricing out of current residents at Crossroads Apartments–a more than 700-unit apartment complex– is happening everywhere throughout the Metro area. Developments made under Frey’s leadership will only ensue dire consequences and widen the racial inequity gaps in housing.

When tenant associations form, they realize their potential to make a difference in their own communities. By exercising their agency through democracy, the associations strategize on a wide range of issues like preserving housing (i.e. Section 8 renewals), formulating campaigns to raise awareness of displacement and gentrification, removing abusive managers, and centering resident controlled repairs and upgrades to name just a few. Tenants are empowered when they exercise their legal rights to organize and reclaim their truths. This is what real change means on a grassroots level.

But, too often, their truths are suppressed, overshadowed, dismissed, patronized, tokenized (as with the case by the city of St. Paul proclamations of “community engagement” surrounding the controversial soccer stadium), and thrown away into the trash. Out of touch public officials convene and orchestrate redevelopment plans that purposely disengage with the true needs of the community. All while putting on a facade of a unified and post-racial Minneapolis.

And history proves that.

Personally, I’m too tired and irritated when public officials like Frey use their political platform to flex a falsified, propagandist, diluted image of Minneapolis that veils the truth.

[*Editor’s Note: The Facebook post in question highlights a development that is being built on a property that has held an empty parking lot for several years. The article has also been corrected to note the income qualifications for the development.]