“Get up, Get Down – There’s an anti-war movement in this town” chanted more than 300 marchers as they made their way north on Hennepin Avenue from Walker Community Library to Loring Park in the bright afternoon sunlight on October 17. The demonstration was part of a national day of action with protests in more than 40 cities against escalation of the war in Afghanistan, but the marchers advocated for a number of other causes, too.

Before the march began, peakers from anti-war, veterans’, women’s, political and other organizations made their pleas to a largely graying crowd, who gathered and talked to one another on the lawn in front of the library.  As the march began, police escorts helped hundreds of chanting, cheering people cross the street and move up both northbound lanes. Traffic piled up in all directions and many drivers honked their horns and waved peace signs to support and encourage the marchers. 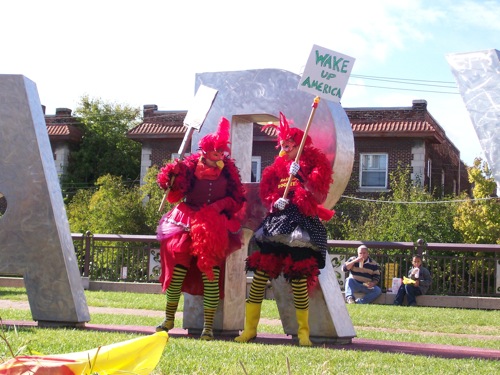 A few marchers used comic relief to invigorate the crowd, many of whom recounted stories from years of participation in demonstrations. “Wake up” screamed signs carried by Josie Winship and Mary Laurel True, who were dressed in bright red “radical rooster” costumes. They climbed up embankments and the stairs at Loring Park to draw extra attention to the march. Billionaires for Wealthcare, a group of three women in fur coats, carried signs against health care reform and an enormous fake check to thank Senator Any Klobuchar for supporting them.

Misty Rowan, of the Anti-War Committee, wore a red armband to signify she was a peace marshal for the demonstration and available to help or guide any of the marchers. She explained that though she was happy with the turnout, she had hoped the nice day would have brought out more people. “Protesting is exhausting,” she said, adding that, after eight years of war in Afghanistan, the movement always needs new blood.

Donna Noste and William and Beverly Bailey marched, in the red berets they wore to march in Washington D.C. with St. Joan of Arc in 2003. Just ahead of them, Lee Rosenthal and his Generation Y stepson Jon Knickerbocker were among the “new blood” protestors. Rosenthal said he thinks that liberal people have a hard time protesting right now because it can be viewed as “kind of going against Obama.” But he said he feels it’s necessary to show that ordinary people, not radicals, are both the majority and against the wars. 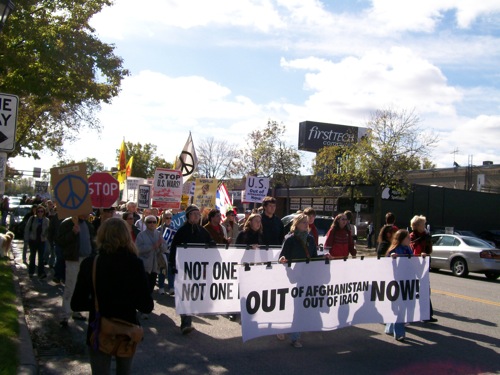 At the finishing rally in Loring Park, the spotlight was on another father and son. College student Jimmy O’Brien, 21, was the only person in the crowd to raise his hand and admit he had never been to a protest before. He attended this one with his father, Richard O’Brien, who said he recently had an underinsured sister suffer terribly from cancer. He finds a problem in the nation’s priorities that there are billions for war but not for healthcare.

Melissa Simiony was accompanied by some of the youngest protestors, five children (not all hers), who had been to a handful of other protests. The boys and girls carried signs and chanted along with the crowd. She said she thought it was important to show kids “they have to use every available avenue” to express themselves and unite with other people who share their view of what is right.

By 3 p.m. in Loring Park, the speakers were finished, the crowd had thinned, the temperature was falling as the sun ducked behind clouds and political hip-hop group Junkyard Empire took the stage. Across the street at the Walker Art Center bus stop, it was impossible to tell there was anything going on at all.

Jimmy O’Brien had said he initially felt like a “fish out of water” at his first protest, but “I don’t think it will be my last.” Which is exactly what the anti-war movement in the Twin Cities is relying on.