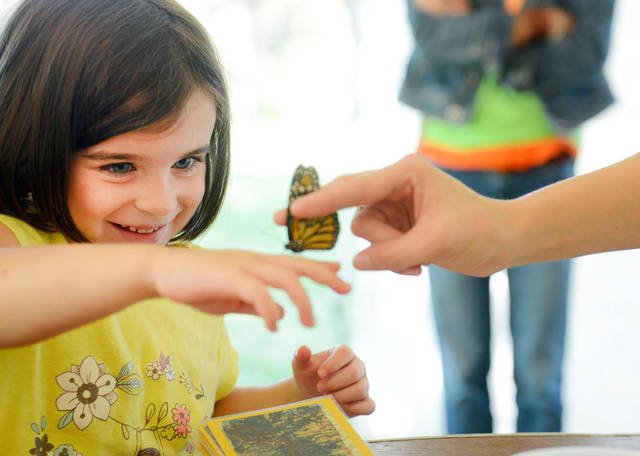 (Photo by Zachary Bielinski) Graduate student Amanda Stephens shows Lydia a monarch butterfly before it’s tagged and released at the Minneapolis Monarch Festival on Sept. 6, 2014, in the Nokomis neighborhood. School researchers say monarch populations have dropped in recent years, but they’re optimistic about reversing the decline.

Against a backdrop of milkweed, flowers and bright orange wings, monarch butterfly researchers and educators gathered Saturday to enlist the public’s help in saving the delicate insects.

Members of the University of Minnesota’s Monarch Lab attended a festival on the shores of Lake Nokomis, where they tagged and released monarch butterflies with the public to learn more about migratory patterns.

Loss of habitat and weather extremes have made for grim monarch population rates in recent years, but University experts are optimistic that education and conservation efforts can help the insects bounce back.

The Minneapolis Park and Recreation Board, along with the U.S. Forest Service and the University’s lab, staged Saturday’s festival, which had more than 1,000 attendees celebrating the butterflies and tagging hundreds of them to track their migration patterns.

Residents raised the monarchs as part of a series of citizen science workshops in August, where Monarch Lab staff members gave away 300 monarch eggs in preparation for the event.

Researchers and volunteers will recover the tagged insects in parts of the U.S. and Mexico this fall during their annual southern migration, said Kelly Nail, a conservation biology doctoral candidate who works for the University’s lab and attended the festival.

The festival also served as a venue for lessons on monarch butterflies and how to preserve their habitat. Butterfly enthusiasts from the University gave hands-on presentations for the public.

“I just learned more about monarchs in 15 minutes than I have in my whole life,” said Cathy Benson, a festival attendee.

Climate change and a shrinking habitat have helped reduce the insect’s population to its lowest level ever, said Wendy Caldwell, a University lab staff member and coordinator of the Monarch Joint Venture, a conservation group.

Late last month, one of the group’s partners started a petition to classify the monarch as an endangered species, but experts still say populations could grow over time.

The butterflies sync their migration patterns with the changing seasons, Nail said, but when the weather doesn’t cooperate, the insects will die.

Though weather extremes contribute to fluctuating monarch populations, she said, habitat loss is a bigger problem.

Monarchs only lay eggs on milkweed, a plant that has been disappearing along the butterflies’ nearly 2,500-mile migration path to make room for more crops. Herbicides have also led to a decrease in milkweed, Nail said, which many people consider unwanted.

Pulscher said the monarch butterflies that spent the winter in Mexico last year, if laid out wing to wing, would cover a suburban backyard.

In the past, that area would have been more than 40 acres.

Despite the population decline, some researchers and outreach professionals believe the monarch can make a comeback.

“If everyone does what they can to make sure habitats are healthy, I think the future can look pretty rosy,” said Karen Oberhauser, the Monarch Lab’s lead researcher.

Michael Rizo, an international program specialist for the U.S. Forest Service who attended the festival, said he’s seeing an increasing number of nectar plants and milkweed in Minnesota yards.

Nail said the public should do its best to preserve the monarchs and encourage the population’s growth.

“Something the weight of a paper clip that can fly all the way to Mexico is really amazing,” she said.