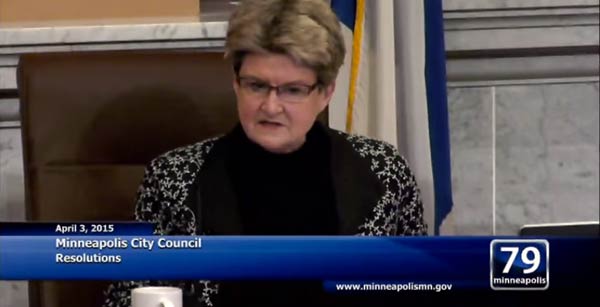 Earlier this month, the Minneapolis City Council adopted a resolution that originally would have banned city-funded travel to Indiana, but quickly changed it to a resolution calling on Indiana and 27 other states to adopt protections for LGBT people.

Council President Barb Johnson was planning to offer a resolution that would have stopped city employees from traveling to Indiana on the city’s payroll due to that state’s new “religious freedom” law. A copy of that resolution can be found here: [PDF]. However, on Thursday, Indiana’s legislature passed, and Gov. Mike Pence signed, an amendment that for the first time in Indiana’s history offers some protection for LGBT people. The amendment keeps intact nondiscrimination laws in Indiana municipalities, but does not extend nondiscrimination across the state.

The changes to the religious freedom law states that the statute does not:

(1) authorize a provider to refuse to offer or provide services, facilities, use of public accommodations, goods, employment, or housing to any member of the general public on the basis of race, color, religion, ancestry, age, national origin, disability, sex, sexual orientation, gender identity, or United States military service; (2) establish a defense to a civil action or criminal prosecution for refusal to provide such services; or (3) negate any rights available under the constitution of the State of Indiana

Johnson offered a substitute resolution on Friday that acknowledges the change to Indiana’s law, but also criticizes it for not going far enough.

“With this addition to the law, I think that it largely corrects the concerns and objections that have been raised nationally. There still is not affirmative protections in Indiana law but that’s the situation that was before they passed the statute,” she told the council. “I think these changes came about because of the activism of people across the nation including the City of Minneapolis and our mayor and city council have made a quick impact and therefore I think the situation has significantly changed.”

Mayor Betsy Hodges added, “Things are still not where we want them in Indiana and in other states around the country and I appreciate that this resolution addresses that and makes that statement clearly while understanding that Indiana, at least now, is positioned similarly to other states in the country, all of whom we want to be proactive in supporting LGBT people.”

The council passed the resolution in a unanimous vote.

Here’s video of the vote on Friday morning:

[See original post here, including the full text of the resolution: http://thecolu.mn/16425/after-indiana-minneapolis-council-calls-on-states-to-adopt-lgbt-protections]