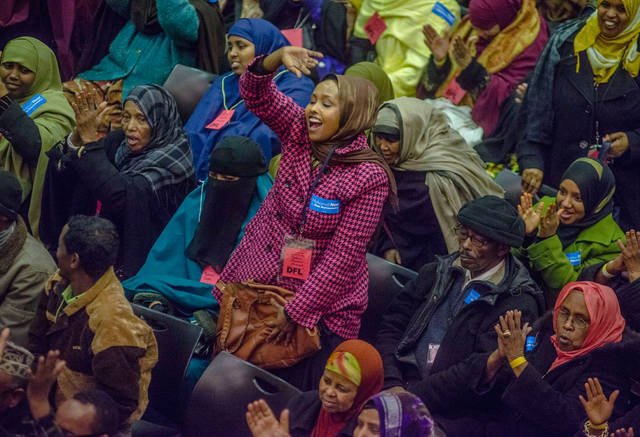 Mohamud Noor supporters flooded Coffman Union’s Great Hall with a sea of red badges Wednesday night, dotting a crowd of nearly 750 political activists who came together for the second DFL caucus in less than three weeks.

After the original Ward 6, Precinct 3 caucus on Feb. 4 ended in chaos and controversial allegations, another reconvened as two DFL candidates are contentiously vying for the seat to represent parts of the University of Minnesota in the state Legislature.

Minneapolis School Board member Mohamud Noor is challenging Rep. Phyllis Kahn, DFL-Minneapolis, first elected in 1972, for a seat in the House Chambers to represent areas of the University, Cedar-Riverside and other surrounding neighborhoods. Nearly a quarter of the district’s residents are Somali.

“This a place where people who fled the horrors of war are becoming full partners in our democracy,” former Minneapolis Mayor R.T. Rybak said to the crowd.

While some question if the longstanding legislator’s performance truly reflects the district’s evolving community, others believe the newcomer’s lack of experience wouldn’t meet the area’s needs, including those of the University.

Noor’s registered supporters outmatched Kahn’s Wednesday night, which will strengthen the newcomer’s presence at the DFL convention this spring, where the two candidates will vie for the party’s endorsement. Noor will send 28 delegates, and Kahn will send 15. More than 400 people registered at the caucus.

In addition to selecting delegates, residents discussed party goals and heard from various political officials. Expenses like private security elevated the caucus’s cost to about $5,000. Unlike other caucuses, attendees were required to verify that they lived in the precinct’s area by providing proof of their address.

The tighter security measures follow the original Cedar-Riverside caucus meeting at the Brian Coyle Community Center earlier this month, which was quickly shut down by Minneapolis police.

“In our party, you should be able to participate and disagree without fear of retaliation or without fear of being attacked,” DFL Party Chair Ken Martin said to the crowd Wednesday night.

At the first caucus, Ilhan Omar, an aide for Ward 12 City Councilman Andrew Johnson, sustained bruises and a concussion.

Ward 6 City Councilman Abdi Warsame, a Kahn supporter, is believed to be affiliated with the incident. There is an open complaint against Warsame, said city spokesman Mathew Laible, but other details on a potential investigation cannot be provided under state law.

“People think that things should happen in a certain way, and when they don’t, they get irritated and they possibly say things that they shouldn’t say,” Kahn said.

Warsame has gained experience in the predominantly Somali neighborhood while serving as executive director of the Riverside Plaza Tenants Association and has raised support for Kahn.

Kahn, who chairs the House’s Legacy Committee, has a long history in Minnesota politics — from spearheading the Minnesota Clean Indoor Air Act to leading laws on gender equity in athletics.

This legislative session, Kahn, who addressed the crowd in Somali on Wednesday, will advocate for renovating and expanding the Brian Coyle Center, which houses community organizations along with a gymnasium, kitchen and meeting rooms.

“I have served the community well, now supporting needed improvements to parks, including the Brian Coyle Center,” she said to the crowd.

But with the revitalized political activism in the community, Noor is carving out a larger piece of the demographic.

“It helps if you can speak their same language, but the bottom line is understanding the issues that impact that community and becoming a representative for that community,” Noor previously told the Minnesota Daily.

Among the issues in the neighborhood are ongoing concerns from residents of the 11-building Riverside Plaza complex, who have criticized the development’s upkeep and have said that they have been taken advantage of by the complex’s management.

“[Noor] is in the midst of things that are affecting this community,” said Hassanen Mohamed, a Noor supporter and Cedar-Riverside resident.