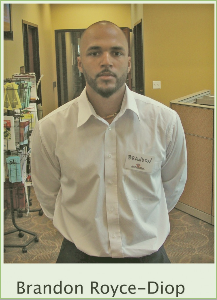 “It’s a group of 10 educators, community members and student advisory groups — all under the Minnesota Minority Education Partnership,” explained Brandon Royce-Diop, who facilitated a May 19 day-long forum at the Urban Research and Outreach Engagement Center (UROC) in North Minneapolis.

He points out that the “disciplinary gap” is as much a problem as other more discussed educational disparities. “We want to bring the community together…to figure out how we can corroborate and actually come up with some action steps to start to resolve this issue,” proclaimed Royce-Diop. He added that accountability must exist to ensure that “policy and practice” are consistent.

“We can’t keep shying away from race-specific conversations and race-specific programming. When you have a problem, you address the problem directly and head on, and not through diagnostic applications.”

Royce-Diop expressed his concerns that his group discovered an 11-to-one suspension disparity between Black males and White males. As a result, a new system is needed to better identify those teachers who seemingly don’t work well with Black students, he advocates.

“There are those who have the propensity for referring students for disciplinary measures, and there are those that don’t,” Royce-Diop said. “We need to figure out who those teachers are because it otherwise reflects badly on every other teacher.”

Jermaine Alexander, a parent whose son was expelled from Wayzata High School in 2009, told the forum during a panel discussion in which he was a panelist, “A principal handed me some papers saying that my son was being suspended on the recommendation of expulsion.” He added that his son was questioned by law enforcement officers without his presence. The entire ordeal “put a strain on our relationship. We had to move to [a] different neighborhood [and] a different location” for him to finish school,” says the father.

Michael Friedman, the executive director of the Legal Rights Center, and also a member of the panel, has worked with schools on “restorative justice programming” for students. “Restorative justice is based on the scenario that everyone agrees that the incident happened, and that we are going to have this process to try to fix it,” he explained.

There is too much “labeling and stereotyping” of Black males in schools, says Royce-Diop. “When we placed police in schools, the likelihood of arrests referred to those officers are five times greater” than in schools without officers present, he believes. 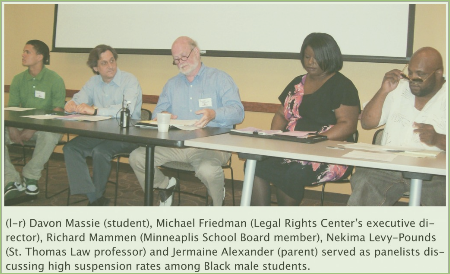 “I was given a disorderly conduct ticket in my sophomore year,” admitted St. Paul Humboldt High School junior Davon Massie, a student on the panel. “Someone was talking about my friend, and I spoke up. He walked up and got into my face, and the teacher called security.”

Minneapolis School Board Member Richard Mammen admitted that his child once got suspended from school. “I recognized then that there is no due process. You have to take someone at their word about the decision that was made.”

“We are now reviewing the policy, procedures and regulations” regarding discipline and suspensions, said Mammen. “It’s not just suspensions, but also administrative transfers and things that happen to move kids around and to remove them from buildings.”

“[Teachers] don’t challenge the Black kids in my regular classes. They also look at them differently, like they aren’t going to learn as quickly,” noted Massie, who participates in a college-access program at his school.

St. Thomas Law Professor Nekima Levy-Pounds remembers once when she volunteered several years ago in her daughter’s then-first-grade classroom, “One of the things I noticed was these African American boys who were suddenly going to the bathroom quite frequently” as she worked with students in the hallway. “I realized that the [White] teacher did not send [any] one of those African American male students out to read to me. Later I found out that she felt that they did not deserve to have that one-on-one attention because she saw them as troublemakers.”

“The reason why the issue is so big is because when the student is suspended [or] expelled, not only does it affect their emotional sense of self, but also it affect their learning time and time spent in the classroom,” said Royce-Diop. Among the recommendations he suggested are “swift” notification of parents when their child is suspended, hiring more Black male teachers and establishing a state-wide task force to address the issue.

“I would like to see a more radical approach — to see people getting mad about the issue,” said Levy-Pounds. “Sometimes you have to take it a step further. I think there is a moral imperative for us to address what is going on.”

“There are a lot of holes in the [suspension] data [because] an individual is interpreting the action of the student, concluded Royce-Diop. “Out of school suspensions should be reserved for severe offenses only.”