On numerous occasions we have listened to our leaders emphatically state that Africa is not ready for democracy. This protracted feast of political rhetoric has culminated in African nations being governed under the tyranny of the “OR” paradigm while being denied the alternate path of “AND” thinking.  Authoritarian leaders have played this tune to perfection convincing the public that they have to choose the lesser of the two evils, authoritarian rule “OR” under-development; lack of individual liberty “OR” lawlessness; censorship “OR” genocide; life-presidency “OR” instability.

“When you choose the lesser of two evils, always remember that it is still an evil.”—Max Lerner

African leaders have offered us a false choice between Scylla and Charybdis and we have blindly bought into this myth. With the public trapped behind the cages of ignorance, regimes have the ability to control and distort information while consolidating power at will. Africans have to be cognizant of the “AND” paradigm which offers a more sustainable platform for progress. “AND” thinking opens up possibilities that in Africa, we can simultaneously have democracy “AND” development; liberty “AND” peace; freedom of expression “AND” order; presidential term-limits/power change “AND” stability. 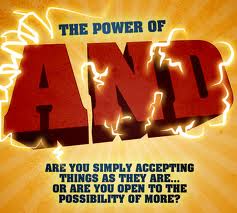 The failure to harness the power of “AND” thinking has been one of the major setbacks that has trapped Africa in a cesspool. We have succumbed to the short term rewards of the “OR” paradigm protecting the ‘devil we know’ because they will scratch our back in return. In the process Africa has been a breeding ground for fragile democracies and autocracies. The blueprint involves destruction of social and political institutions that could engage mass participation and enable democracy and opposing voices to thrive. “AND” thinking is powerful and threatens the core principles of authoritarian leaderships. This paradigm offers people the choice to engage in the political process, hold their leaders accountable, believe in a government that works and creates opportunity for all, flourish in a climate of certainty that offers limitless potential for economic growth, innovation and long term sustainable institutions.

African nations stuck in the “OR” paradigm have succumbed to ice sculpture politics. Like the ice sculpture that only remains intact under very cold conditions, ice sculpture politics are stable under very controlled and restrictive conditions. In such a nation, people are prohibited from freedom of speech, freedom of demonstration, wide spread censorship, opposition politics are severely suppressed, separation of powers is nonexistent and there is always one authoritarian figure holding the reins of power. Such single-season systems of governance are vulnerable to significant changes in political climate— the ice-sculpture inevitably melts. Whenever the power of the authoritarian figure is threatened under such a system, the integrity of the entire political apparatus is compromised. Egypt and Libya are the most recent examples of ice sculpture politics that are melting to the core as a result of fallen regimes.

The characteristic feature of the “AND” paradigm is a guarantee of iron sculpture politics. It offers a structure that can withstand unpredictable forces within a nation. A system that offers policies and institutions that permit long-term peace, stability and liberty. This is the foundation from which many of the western governments flourish while their counterparts in Africa cyclically crash to the ground whenever one of the authoritarian leaders is ousted from power. Power change does not destabilize nations that practice iron sculpture politics. If our governments have any hope of transforming the fate of our nations to achieve better outcomes, they have to embrace the “AND” paradigm and refrain from the tyranny of “OR”. Failure to change course will continue to condemn African nations on the perilous path of showcasing ice sculpture politics.