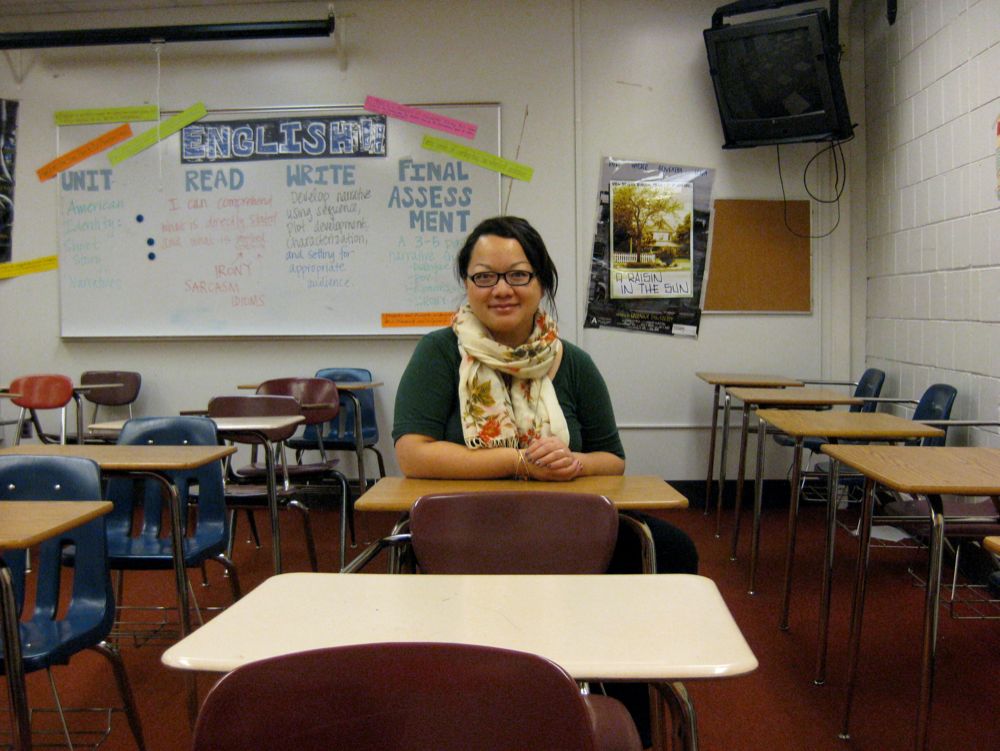 Humboldt High English teacher Shoua Moua sometimes gets flack from parents who imply that someone whose first language is Hmong should teach ESL and not English. For many of her students, though, Moua’s Hmong language is a powerful symbol.

“’Because English isn’t my first language, I struggle with the same kinds of language learner skills that you are struggling with,’” she tells students. “I’ve gone through the early learning books that they’ve gone through, and I survived it.”

Moua found her passion for teaching early. She loved speaking in front of her class, and her teachers encouraged her to enter the education field. “I got the impression from them that I was needed,” she said.

Moua went to the University of Minnesota Duluth, where a St. Paul-based mentorship program for future teachers of color paid for her books and kept her connected to the district where she would eventually return to work.

“Students have told me many times, ‘I have Hmong neighbors, but I don’t talk to them, because they don’t talk to me. You’re like the only Hmong person I talk to,’” she said.

In St. Paul and Minneapolis, the teaching corps is much whiter than the student body. Minneapolis and St. Paul district human resources officials say they want more teachers of color, but race doesn’t trump credentials. For now, too few people of color are making it through Minnesota’s education pipeline into the classroom.

With fewer students of color finishing high school than white students, the teacher-student diversity gap is unlikely to close soon on its own. Some say proactive recruitment of non-white professionals is needed to make up the difference, but others hesitate to support strategies that use race as a desired qualification for jobs or college acceptance.

Although some white students participated over the years, it principally recruited mid-career professionals of color into a one-year licensure program. Johnson was in the first cohort.

A state grant helped the university pay for tuition, textbooks and a laptop for each student. Students took seminars at night and immediately applied what they learned in a full-time classroom internship, for which they were paid a $10,000 stipend. The program required cohort members to commit to teach four years in Minnesota schools.

The most valuable piece of the program, said coordinator Jeanne Mortinson, was the support network the students developed through a cohort model. They took all their seminars with the same group of students. “They’ve made lifelong friends,” Mortinson said. “That support helps you through all the bumps in the road that happen typically as you’re entering a career.”

That kind of support network is difficult to find in schools where mostly white teachers cannot relate to certain issues only experienced by teachers of color. “It’s hard to be someone who has a background different from just about everyone else in the room,” said Mortinson. With the cohort model, “You’re not alone.”

Until 2003, Minnesota had a statute that committed the legislature to grant money to training programs designed for teachers of color. The statute fell victim to a fiscal crisis that inspired cuts to many programs.

Since then, programs like CUE continue to receive state grants but no longer get them directly through a teachers of color statute. Now the University of St. Thomas requests money from the legislature for CUE every two years.

After funding was cut in 2003, St. Thomas was no longer able to provide the intense staff support or the financial aid they once did. CUE’s current incarnation is a part-time, evening special education licensure program. Tuition is covered, but there is no longer a residency.

The same year the teachers of color statute was repealed, the U.S. Supreme Court decided the landmark case, Grutter v. Bollinger. A white student sued the University of Michigan Law School, arguing that she was denied admittance because the school favored non-white applicants. The court’s decision said that higher education institutions are allowed to use race as one of many factors in admittance decisions.

On October 10, the Supreme Court began hearing arguments for another landmark affirmative action case that has potential to restrict the use of race-conscious admissions policies.

Minnesota colleges are also grappling with a gap between teacher and student diversity.

At Minnesota Community and Technical College a group of faculty are embroiled in an ongoing debate about the school’s commitment to hiring faculty of color. Members of the Racial Equity Committee believe the school ought to do more to recruit and support faculty of color.

The Minnesota Spokesman-Recorder reported last July that MCTC meets or exceeds most of the affirmative action goals set by the Minnesota State Colleges and Universities system. The Racial Equity Committee argues that the goals aren’t enough.

To attract teachers who would relate more easily to the school’s growing non-white population, the English department added a preferred qualification to their job listings of experience in Critical Race Theory.

That preference was grounds for a complaint made by white man who said it discriminated against him. MCTC’s lawyers advised the department to stop using the preference. The English department has not made any job calls since the complaint. Advocates for the qualification argue that many white scholars are familiar with the theory, while many non-white scholars are not.

For Equity Committee leader Shannon Gibney, the need for non-white faculty goes back to her students. “People of color tend to be more sensitive to issues of inclusion and equity and diversity because of the bodies that we move through the world in and the experiences we have with those bodies,” she said.

“We see these places where it’s like, hey, there’s some real issues with maybe not outright racism but cultural competency that need to be addressed,” said Gibney. “The way that they perpetuate is by pretending they’re going to go away if we’re all just Minnesota nice.”

“Are you here because you’re black?”

In 2001, recruiters from Minneapolis approached Karen Palmen as she was finishing her teaching license at St. Thomas. She turned in an application to the district, and she was hired without so much as an interview, she said. She believes it’s because she’s black.

Later, as she interviewed and was hired for other positions, it bothered her that coworkers sometimes seemed to assume her race earned her promotions. Sometimes in conferences, she feels like she needs to explain her credentials to parents who don’t seem to immediately trust that she’s a good teacher.