Our group standing in the street in front of the White House grew to about 45 people as others from the VCNV Peaceable Assembly Campaign joined us. Most of the Minnesotans wore tee shirts with “Minnesotans for Peace” on the back and red handprints on the front as a reminder of the bloody results of war. There was a “Bring Them Home” banner to go along with the “End the Occupation Now” one. After vigiling for a time with signs reading “Healthcare Not Warfare,” “End the US War in Pakistan,” “End War Spending” and similar messages, the group lined up and began reading the names of the Minnesotans killed in the wars. We followed by the shoe throwing providing a good visual for the media who had arrived. It was suggested that we do the die-in action while the media was still engaged so around noon those risking arrest would begin to lay down on the sidewalk within the “no demonstration permitted” zone.

Marie Braun, one of our group’s primary organizers, and I informed the Secret Service that we would be commencing the “die-in” action shortly. They asked us to talk directly to the Park Police and one of them asked me “How many want to get arrested?” I explained that we were not “wanting” to get arrested but we did plan on “risking arrest” by carrying our symbolic action as close to the White House as we could get without climbing the fence, knowing that arrest was very likely. (It is always best to remember that law enforcement also has a “choice” in what laws and how they are enforced.)

The Park Police commander joined the conversation and tried to discourage us from getting arrested. He told us the DC jail was a “bad place” – filled with murderers, rapists, and the like. “You can lay down on the sidewalk and we’ll give you three warnings before you are arrested. You can leave at any time before that third warning and make your point. But if you do stay, you will be arrested.” He told us that after the arrest you would be taken to the Anacostia Station to be processed and you probably will be released if you paid a $100 forfeitable bond. But there is no guarantee you’ll get that. You might just get a citation with a future court date or they might lock you up overnight and see a judge the next morning. He told us he thought it was a 50/50 chance either way. He told us many groups make a pre-arrest “deal” with authorities before such an arrest to “negotiate” the terms of release. That is not the style of Voices or other, smaller grass-roots organizations. 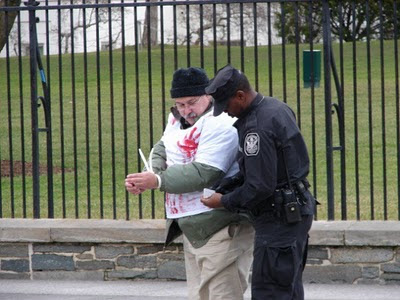 The weather was in the 40s with a steady wind so when I laid on the sidewalk it was rather cold. Fortunately I had on my winter coat! As fellow protesters walked around us singing and reading, twelve others quickly joined me, including Father Bill Pickard from Scranton, PA who first “anointed the ‘dead’ with oil in the sign of the cross” on our foreheads before lying down himself. As the police read out the first and second warnings, all the others got behind the yellow tape “police line” barriers that were quickly unfurled. It was about 20-30 minutes before the arrests began and many of us were glad to be getting on our feet and handcuffed. We were cold and stiff.

Only one of us was younger than fifty with the majority of arrestees in their 60s and 70s with at least John Braun over 80. After our photo IDs were taken and we were photographed, we were stuffed 6 to a side in the police van with the 13th arrestee driven separately to the Anacostia Station. We were packed in like sardines into the narrow confines but most of us were still on an emotional high from the power of the witness and the encouragement of our friends.

After arriving at what was to become only our first stop, the police asked who in the group planned to “pay their way out” and did anyone else “want to be locked up?” Nine of the 13 stated they definitely wished to pay the $100 and be released. Three others of us said we were choosing not to pay. One was undecided at that point. Those who were going to “forfeit” were going to be processed first so they could be released. After the first of many, many “delays”, we were all brought in to the same holding area and told by another officer of higher rank, “I have some ‘good news’ for you.” He meant it to be ironic as his news was that the “pre-trial office downtown” would not allow anyone to pay and go. “All of you will spend the night in jail and see a judge in the morning.” That was certainly a shock to some but everyone seemed to take the news in stride even if they weren’t happy about it.

Soon after as we entered our first booking area we lost all sense of time since our watches and phones were placed in our “property bags” along with our shoelaces, belts, jewelry, pens, paper, books, … – everything we carried with us. The one exception was the nitroglycerin pills carried by one of us for heart problems in the past. All our cash was placed in a separate bag. We had all pockets searched and were “patted down” and separated male and female into different holding pens. We were told we would be allowed to keep our jackets because we would likely be at a different facility after we were released and “it is cold out there and you won’t have your property with you. You will have to come back here to pick it up.”

After getting our thumbprints recorded on little cards and a small blue wristband which was numbered, we were eventually transferred to what we were told (after we asked) to the First District in SW Washington. We were also transferred from the Park Police custody to that of the DC Metropolitan Police. We are re-handcuffed for each trip, sometimes in front, sometimes behind but each time packed into a narrow van that is hard to maneuver into when you are my size or taller. At each stop we wait in the van (and in the cold) for a long period (once about 30 minutes, another longer than 45 minutes) before being allowed out and marched into the next jail or detention center. The handcuffs dig into your wrists and Joe Palen’s carpal tunnel caused him quite a lot of pain and discomfort. Especially when we are handcuffed from behind and then have to get into and out of the van is very difficult, especially at our ages. It is getting dark outside as we arrive at our second jail so we guess that it is about 5:30 or 6 PM. Our arrests were completed about 12:30 – before we began this journey into several layers of Dante’s inferno.