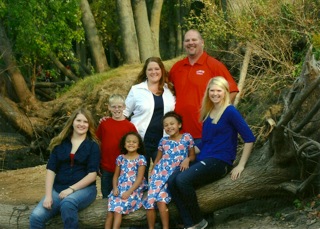 Sarah Hamlin dreams of the day when it’s socially acceptable for unprepared mothers-to-be to put their children up for adoption.

Hamlin is the matriarch of an extremely blended family, with a step-daughter in college, a 13-year-old birth daughter, an 11-year-old son who was adopted at 5, and two daughters, 8 and 5, who were adopted together at 4 and 18 months.

She’s convinced that the three children she adopted out of foster care would be living easier lives had their birth parents considered adoption sooner. The neglect her kids experienced when they were little means they struggle daily with anxiety and behavior issues.

Hamlin is a spokesperson for Adoption Option, an organization that promotes adoption as a neglected but important third option for pregnant mothers. They organize speaking engagements at places like high schools and clinics, and they provide support for both birth parents and adoptive families.

Adoption Option director Jenny Eldredge said the non-profit is not politically affiliated and is neither pro-life nor pro-choice, although they work with organizations that have a variety of philosophies.

The Daily Planet sat down with Hamlin to learn more about why she thinks society should embrace adoption.

Why did you decide to adopt older children?

It’s just always been part of what I grew up with. My neighbors did foster care when I was growing up, and they adopted some kids from foster care. I didn’t meet my biological dad until I was 19, so I’m partly adopted.

Tell me about your adopted children. What are they like? What do they struggle with?

My son was neglected. His birth mother was drunk for the entire pregnancy, so he struggles with fetal alcohol effect. He doesn’t have the full-blown syndrome for some reason, but he has a lot of trouble with organization and attention, severe behaviors and some other emotional stuff.

My other daughter, the eight-year-old, has struggled a lot with attachment. She and her sister were neglected. They had birth parents that were mentally challenged at about a 9-year-old level. So she struggles a lot with that: the first four years of her life being neglected, malnourished, just because they didn’t really know how to parent.

What does that mean for you as a parent? What’s it like to care for children who were neglected at a young age?

It’s lot of work, a lot of counseling, a lot of different therapies, a lot of trial and error. It’s a struggle some days emotionally in our family, just because all my kids have so many different needs, and it’s hard to go in different directions.

My kids have all bonded like siblings. They fight like siblings; they get along like siblings. It’s a typical family, but then there’s also all those outlying situations that make it a little bit more challenging.

Had they had an adoption plan when they were babies and not had that kind of upbringing, things would be totally different for them, and they wouldn’t have so many struggles. It doesn’t have to be this way.

Tell me about your work with Adoption Option. I know you spoke on a panel at a high school last year. What did you tell your teenage audience?

When I talk to the students, I tell them about my story—about how adoption is important to my family and also where my kids struggle and what could have been different if they had had an adoption plan as infants or even early toddler stage—if my son hadn’t been neglected and passed around to all these different people in his life.

I really want people to consider: if you’re not fully ready to parent, adoption is there.

It should totally be an okay decision to choose adoption if that’s what people need to do.

How far do you think we are from being a society that embraces adoption?

On some level people accept it. I think people still think of it as, you’re a childless couple, you struggle with fertility, so you get this beautiful, brand-new baby, and maybe it’s a baby from a different country.

I think having shows like 16 and Pregnant on MTV is not helping the cause. I think people think, ‘Oh parenting is a piece of cake. I can do it.’ It’s just setting us back further.

Talk to me more about the stigma you see around birth parents giving up their children for adoption.

I think open adoption is a huge step in the right direction. That way the birth parent can still have contact and know how their child is doing as they grow up. That’s really important for the kids, too, to have that connection.

I think that continuing to promote open adoption and making sure that people know that’s an option [is important]. I’m not sure that people realize that that’s kind of the way adoption has gone now. That will definitely push us in the right direction.

Do you have an open adoption with your kids?

We do. My son’s parents, the birth mom has probably passed away by now. Her alcoholism was so severe when he went into foster care years ago. Birth dad, we don’t know anything about.

With my daughters, we do still see birth mom and dad, and that’s our decision. It’s not a court-ordered decision. We don’t have to, but we feel like it’s important for our girls. The birth parents lost their kids just because they were not able to parent, not because they’re bad parents.

What’s that like? How do they think of this other set of parents?

Well, we don’t talk about it as another set of parents. We go by their names. Because they are mentally challenged, they sometimes put mom or dad in front of their names, so they’ll call themselves Mommy-Whatever and Daddy-Whatever, but my girls are a little confused as to who they are in their life at this point.

Tell me about the rewarding parts of adopting.

I think when you adopt kids that don’t have any other family, to bond in a way that a typical family would bond is really huge. When I see my kids looking out for each other, that’s huge.

Seeing my youngest, she was 18-months-old when she came to live with us. She wasn’t sitting up. She wasn’t crawling or walking or talking or anything, at 18 months. Now she’s a typically developing 5-year-old. It’s huge.

What do families need to know as they consider adopting an older child?

You’re going to encounter things that are big. These kids have had a rough start, and their past is a huge part of who they are today. They can totally learn to adapt in life. They can totally be a typically developing kid with the right interventions.