So, after debating how I could possibly write about our recent trip to Ethiopia to visit with our kids’ birth family and then to Rome for gelato-fueled sight-seeing, I decided to do a small series of excerpts from my journal.
8/6/12
After a long plane ride, a long stint getting traveler’s visas, a long wait in customs, then baggage check and x-ray; after waiting in line at the money exchange, finding our ride and the trip to the guesthouse (whew!) we all dropped off into drooling slumber for a good four hours. I only barely managed to shake the kids awake, in an attempt to get us used to the time change.
Besso, Tigi and Miki have already made friends, of course and are begging to be allowed to play soccer in the streets.  It might be just what they need as they’ve all struggled with bouts of feeling totally overwhelmed. Completely understandable. Addis Ababa is a crazy city, with the same manic energy as a gold rush town: lawless and chaotic driving, barbed wire gates around each house, teeming sidewalks, apartment buildings being flung into the air everywhere you turn, tin shanty towns next to ritzy hotels and absolutely medieval sanitation in spots.  Everything is completely foreign and the kids are holding up well, considering. I have a feeling it would be easier them to take it all in if they were out of the capital, where the pace is a little less frenetic. 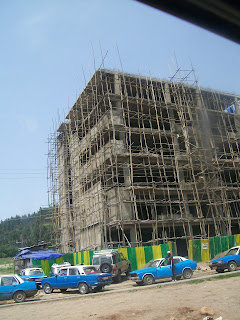 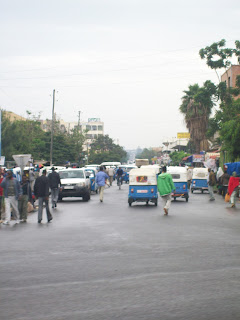 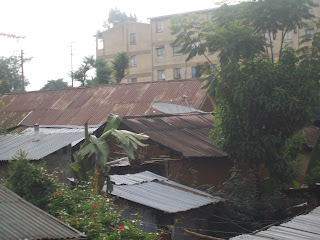 8/7/12
A rough night all around. Chalk it up to jet lag and culture shock– the four youngest kids burst into our room at 6:00AM gibbering all at once that they couldn’t sleep, that they were afraid, that they thought we should leave for Italy this very minute, that they hoped their brother wasn’t blind (had an unfortunate collision on the street near a center for the blind yesterday) and that they missed their friends and their beds.

Miss Teen Wonder, no surprise, was sleeping like a baby. I swear, it’s like she has a super power.

8/9/12
Halleluia! A full night’s sleep, finally! I think we all deserved it after the past few days.

Tuesday was a big sightseeing/errand day; buying gifts for the family, sights around Addis, the National Museum and an ill-fated attempt to locate the Beza Entoto Jewelery workshop. Rats.

Yesterday was the family visit. It was raining quite hard in the morning when we left–really the only substantial rain of our trip thus far. We had a four hour drive to get to their family. On the way we stopped to pick up their uncle and were delighted to find that he had brought the kids’ sixteen year old brother with him.

Their brother is beautiful. He is smart and affectionate and kind, he has a tiny mustache and enough English that it was easy for him to reconnect with his siblings. He has a habit of starting his sentences with the phrase “And by the way…” which is utterly charming. He plans on being either a famous football (soccer) player or a scientist. From the moment he got on the bus, he held, petted and kissed his little sisters and brother. Unfortunately, he also seems to suffer from extreme carsickness, and was sick most of the way. His little sisters clucked and fussed over him the entire time.

We arrived in the town, pausing for a brief minute to pick up a government official who would be accompanying us on our visit. Once at the hotel it took just a few minutes for the family to arrive,

When their mom came through the door, she went weak and her legs went out beneath her. At the same time she was absolutely ferocious in her need to hold the kids, to get to them as quickly as possible. She cried and seemed to nearly crush them in her embrace, though she couldn’t have been more than five feet tall. She kissed Kirk, she kissed me, she called for Miki and pulled him onto her lap as if he were still the infant he had been, all those years ago.

There were kisses with grandmother, uncles and aunts. Many pictures and many more tears.

Their mom is slight, a singer, emotional and loves to have her picture taken. She has a spark and a gregariousness that Tigist embodies exactly. Besso seems to take after the more solemn and watchful side of the family, perhaps her grandmother, who is stately and commanding.. no small feat for someone who couldn’t be more than 4’10”.  Miki’s inquisitive mind is similar, I think, to his brother’s. They are a beautiful family.

It’s such a bittersweet blessing, to be allowed this visit.  There is no way to experience the joy of being reunited without feeling the moments ticking away. This is a situation run through with sadness and compromise. In a perfect world, they would never have been forced to separate; Besso, Tigist and Miki would have been their children only, and never ours. Our guide in this keeps asking me what I want to know from the family, and I can not quite get across to him that we are not here to have our questions answered.  I want to know what it is that I can give to them.  Do they want to know about their friends, their school, what their favorite Christmas present was last year?  Do they want to hear about their first slumber party or Tigi’s cut-throat skill playing cards? We have been given a precious gift in these kids and I only wish I had something to offer in return. 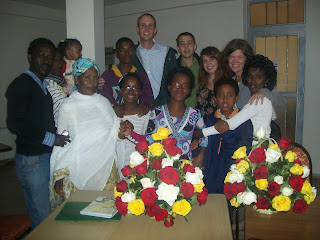