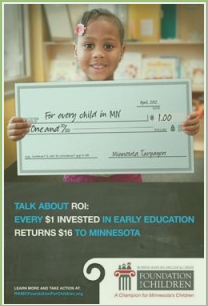 In April 2012, the Robins, Kaplan, Miller & Ciresi Foundation for Children (RKMC) unveiled a public service campaign aimed at bringing more attention to the Black-White educational achievement gap problem in Minnesota and a focus on solutions that have worked towards closing it.

The campaign has included skyway banners, print, online and radio ads. According to Doug Stone, public relations consultant for RKMC, “This media campaign is more like a community call to action, and the RKMC’s efforts to address the achievement gap began long before now.”

RKMC was started by Robins, Kaplan, Miller & Ciresi L.L.P., which is a national trial law firm that has been in business for 75 years, with over 250 attorneys in Minneapolis, New York, Los Angeles, Atlanta, Boston and Naples, FL. Although RKMC has been operating since 1999, it doesn’t have a regular staff and relies on their partnership with the Minneapolis Foundation for administrative support.

Since the RKMC was formed in 1999, “it has awarded more than $10 million in grants to educational programs and community organizations and another $3 million to social justice and public health programs,” Stone says. This $75,000 ad campaign is mainly trying to reach community and educational leaders and other foundations. 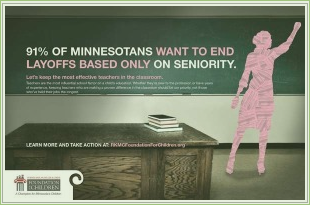 The ads will raise the issue and suggest possible solutions in hopes that it will encourage a broader public discussion about how to close the achievement gap. In a series of scoreboards, the public service campaign also points out the gap between the number of days Minnesota students spend in school versus the number Japanese students spend: 172 for Minnesota, 243 for Japan. It asks the question, “Are we educating our kids to lead in the global economy?”

Some of the ads will state that “A handful of local schools are closing the gap.” A few successful high-performing schools identified by RKMC include the Hiawatha Leadership Academy, the YMCA Early Learning Center, and Harvest Preparatory Academy.

Throughout the U.S., Minnesota has an excellent reputation for its public education system, yet it has one of the widest achievement gaps of any state in the country between poor and wealthy students and between White students and students of color — African Americans in particular. For example, 88 percent of Minnesota’s White third-grade students are proficient in reading versus 38 percent of its Black students.

“The ads also call for strategic investment in early childhood education as the most cost-effective way to prepare students for a productive life. And they call for supporting teachers and, at the same time, holding them accountable for the success of their students,” according to Stone. 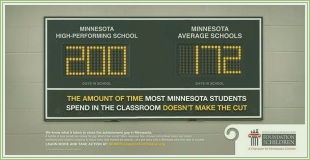 “We wanted to address a critical problem facing Minnesota’s children and one that directly affects the future economic success of the state,” said Michael V. Ciresi, president and chair of the RKMC board. “If we don’t close the achievement gap, many of our students will face a life of low-paying jobs, poverty, and other social problems. And our state will not have enough educated workers to serve as the backbone of our economy. Closing the gap is a win-win for our students and for the community.”

Ciresi said the purpose of the campaign is not only to highlight the achievement gap, but also to suggest to business, political and educational leaders possible solutions, and to get the entire community involved and to take action.

“We need to close the gap sooner rather than later,” said Ceresi. “Every child can learn. We need to give every child the right tools.”

For more information on the public service campaign and on RKMC Foundation for Children, go to www.rkmc.com/Foundation-for-Children.htm.