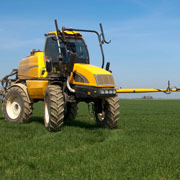 This time of year, 1,000 miles south of Minnesota at the mouth of the Mississippi River there are 7,000 square miles of the Gulf of Mexico devoid of any form of life. The swath of ocean where oxygen levels drop so low that fish and other marine animals are killed off is called the “dead zone.”

The appearance of the dead zone is a seasonal occurrence, fueled by water runoff from farms that contains nitrates and phosphorous. When these nutrients reach the Gulf of Mexico, they cause “algal blooms” (the same thing happens in Minnesota lakes and ponds in the summer). When the algae die, bacteria consume them, and in the process also consume the oxygen in the water that normally sustains fish, crabs, shrimp and mussels which live in the Gulf of Mexico. Researchers estimate that the shrimp habitat in the Gulf of Mexico suffers a loss of 25% due to the dead zone, directly harming the valuable shrimp industry there.

A recent U.S. Geological Society study found that nutrients contributing to the dead zone have not decreased over the past 30 years, despite conservation programs designed to reduce the impact of large-scale agriculture. In Minnesota, $1.8 billion in subsidies was spent on conservation programs over the past 15 years. Most of this cash went towards voluntary programs where farmers are compensated for leaving some of their land fallow, thus using fewer of the fertilizers which contribute to the dead zone in the Gulf of Mexico.

Minnesota and other states in the Mississippi water basin should being doing more to miniize the downstream effects of farming practices. Water quality has continued to decline since the programs were implemented (although perhaps not as severely as it would have without the programs).

Current conservation programs are voluntary, so many farmers who could be decreasing their water pollution are choosing not to because increasing their yield is more beneficial to them. These programs also do not change the fundamentally inefficient system of agricultural inputs that are designed to be used and then washed downstream.

Farmers should have stronger incentives to switch to more sustainable methods of fertilization and pest-control. Policies in Minnesota, positioned at the top of the Mississippi River, affect people and animals that live downstream, and we need to make our conservation programs more effective at accomplishing their environmental goals while providing farmers with opportunities to generate income sustainably.