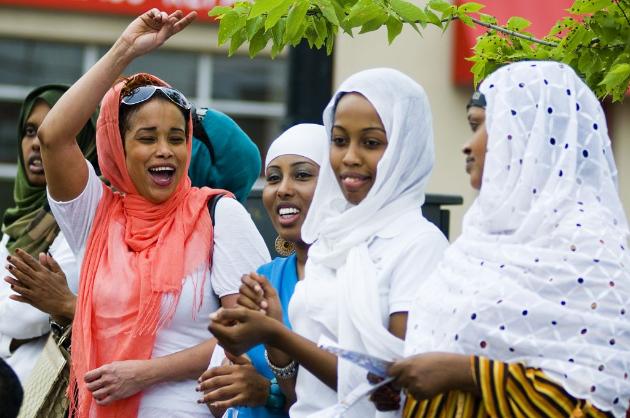 St Cloud patriots are fighting hard against growing Islamic enclaves that are rapidly growing throughout our neighborhoods. Please show your support by signing the petition. Then send it to all you’re contacts.

This is our future, unless we can stop them:

This is really happening. They MUST be stopped.

Any kind of “enclaves that are rapidly growing throughout our neighborhoods” sounds pretty scary, but news reports about the permit application the petition protests suggest that ACT! for America is exploiting a zoning dispute to whip up anti-Muslim sentiment.

St. Cloud is growing more diverse, and plans by the Islamic Center of St. Cloud to build a mosque, school and community space on property it owns at 1850 Clearwater Road has met with scrutiny by future neighbors in an area zoned for duplexes and single-family homes.

Looking to limit the impact on a south St. Cloud neighborhood, the St. Cloud Planning Commission voted Tuesday to recommend a modified plan for a proposed mosque development.

The commission voted 5-2 to recommend to the City Council to approve an amendment, with conditions, to the planned unit development. The move by the council would allow a proposed Islamic Center of St. Cloud development at 1850 Clearwater Road. Commissioners Rick Holtberg and Sheila DeVine dissented. . . .

As part of the conditions to the amendment, the commission recommends the mosque and school be built in the first phase. The applicant would have to come back for approval from the city to move forward with a second phase, which would include constructing a third building to house a community center and gym and allow for expansion of the mosque and school.

In the first phase, the mosque could accommodate 450 people. If the organization is able to expand the mosque during the second phase, occupancy would increase to 600 people.

The Planning Commission discussed the proposal at its August meeting and tabled it so they could get more information about the development’s impact on the neighborhood.

The commission’s recommendation will go to the City Council, which will likely hold a public hearing at an October meeting. The council still has to set that date.

Commissioners had a lengthy discussion Tuesday about the development’s impact on traffic and parking, two of the major concerns among neighbors.

One of the conditions of the recommendation is that when the mosque is in use on Fridays, the other buildings on the site cannot be used. Friday is the peak worship time. . . .

It’s hardly “enclaves” rapidly growing throughout “our” neighborhoods. The changes reflect concerns by neighbors and suggestions by the local paper.

Via Bring Me The News, an August editorial in the Sunday St. Cloud Times

said that [religious] concerns should not be part of the decision-making. The editorial said that “…planning commission members, City Council members and all residents must set aside religious concerns and focus on whether this proposal — no matter the faith behind it — is allowed under St. Cloud’s Land Development Code.”

The paper notes that there are 15 places of worship in single-family residential zones in the city. “Clearly, churches — even some with schools, gyms and meeting rooms — already exist in residential neighborhoods,” the editors wrote.

City staff has recommended approving the proposal except for the retail, restaurant and office space. City staff wrote in its report that it needs more information about traffic projections and parking places.

The Change.org petition, started July 24, 2013, objects to the plan, expressing concerns that threats of lawsuits would force the City of St. Cloud to adopt the initial permit request.

Given the conditions that the Planning Commission has since attached to the permit, as well as the delayed in considering the permit and planned public hearings, the petition seems dated, grounded in points (inflexibility of the part of the permit applications and threats of lawsuits) that are no longer grounded in reality.

The Minneapolis ACT! leader appears to object to the project solely on the basis of the applicants’ religion. ACT! seems bent on living up to its reputation for intolerance.

Following the terrorist attack at a mall in Kenya, ACT! circulated by email a column by a British writer asking where the outrage against the attack was among Muslim leaders. This missive hit Bluestem’s inbox just as headlines like MPR’s Kenya attacks condemned by Somali-American community in Minnesota hit the airwaves and print media. A photo cutline from the story:

Abdiaziz Sugulle of the Abubakar As-Saddique Islamic Center defends a press conference in which no questions were taken. Religious leaders condemned the attacks in Nairobi, Kenya, but said they didn’t have any information to comment further.

Bluestem suspects we’ll see more fear-mongering by ACT! and its allies especially in swing districts as the 2014 elections approach. The anti-Muslim agitation seems to be this cycle’s flavor among the xenophobes.