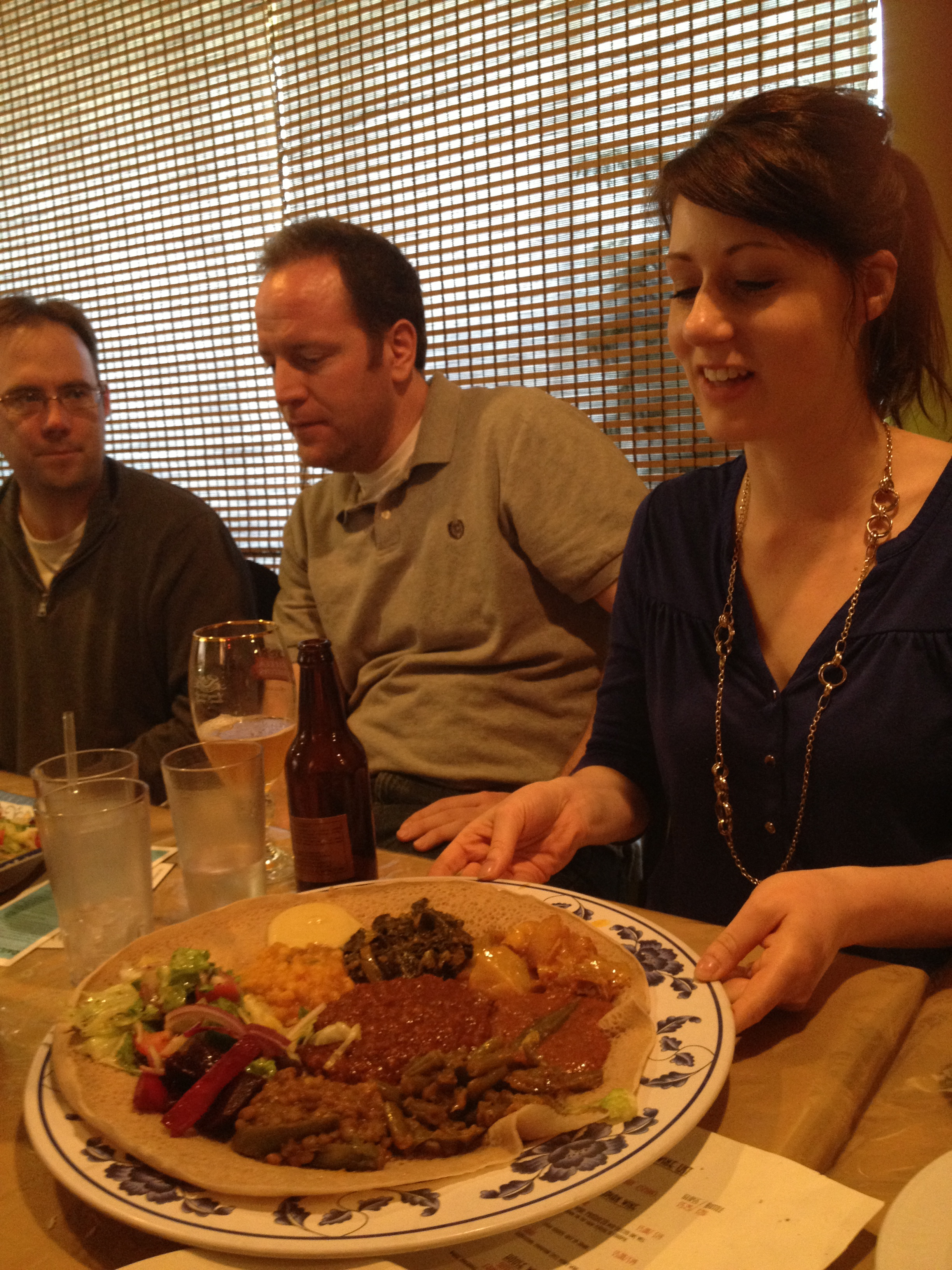 Stop #4 on the tour Around the World in the TC: At Fasika, United Foodies of Minnesota share the vege sampler served on spongy injera bread. (Photo by Michelle Tran)

Earlier this month, when many people were welcoming spring by celebrating Cinco de Mayo, others in Minnesota were celebrating Fasika, or the Ethiopian Easter. For this month’s stop on the tour Around the World in the Twin Cities, we headed across the Atlantic to Africa by visiting the Ethiopian restaurant Fasika at 510 North Snelling Avenue in St. Paul.

United Foodies of Minnesota group member Nick Maryns carved a passport stamp of the Ethiopian flag for the outing. The star in the center of the flag symbolizes diversity and unity. It was an appropriate sentiment for Stop #4 on the tour. Fasika was bustling with a varied crowd of diners.

“Our customers are diverse,” said Fasika restaurant owner Atnafu Yeshidagne. “There are many Ethiopians in the Twin Cities, but our customers are not just Ethiopian. We serve a lot of people from the East African community, the Indian community, and others…and we offer quite a variety of choices on our menu. I’m a meat eater and like kitfo [lean beef], but we get a lot of customers who are vegetarian. Actually, items 29 through 36 on the menu are all vegan.”

These options make sense for those who observe the Ethiopian Easter by fasting for the 56-day period of Lent. During that time, no meat or animal products may be eaten, including milk and butter.

Yeshidagne started Fasika because there were a lack of Ethiopian restaurants when he first moved to Minnesota from Dessie, Ethiopia in 1981. He taught himself to cook and was greatly encouraged by his friends to pursue his passion. Although he was not always able to find the exact spices that he needed, he managed to scrape together similar ones.

In 2001, Yeshidagne and Menderine Gebretsadik, the sister of one his friends, started Fasika at the Snelling location. Like Yeshidagne, Gebretsadik, is a self-taught chef.

“She came from Harar, Ethiopia, about 15 years ago and just grew up watching her mom cook. It’s probably one of the best ways to learn–practice, practice, practice,” said Yeshidagne, “We cook authentic Ethiopian food and we make it the way it’s supposed to be. We remember the taste of food growing up, and we try to cook as close to that as we can get. For us, originality and authenticity is important.”

The United Foodies of Minnesota enjoyed a taste of Ethiopia as we used the spongy injera bread to scoop up atkilt—curried vegetable stew—or my favorite, misir key wot: lentils cooked in spicy Berbere sauce. Injera, made from teff flour, is a national dish of both Ethiopia and Eritrea. Teff is a nutritious annual grass and species of lovegrass native to the northern Ethiopian highlands with very little gluten. The word “teff” itself is said to come from the root word that means “lost” because the teff grain is so small.

The teff flour is mixed with water and fermented for several days, which is what gives injera its sourdough-like taste and bubbly texture. The mixture is poured over an electric stove or clay plate and cooked like a crepe. Stewed meats or vegetables are served on top of the injera, much like a plate. However, since you rip off pieces of the injera to serve up the stewed goodies, the bread does double-duty as an eating utensil. The porous top of the injera is perfect for soaking up the juices and spices of the food, similar to a bread bowl that absorbs soup.

For those not interested in sharing communal finger food, Fasika also offers dishes like moja asa, or pan-fried catfish, which use the more traditional knife and fork as eating utensils. In general, Yeshidagne, finds that customers in Minnesota are open-minded and like to try new cuisines.

“We have a lot of customers who come a couple times a week, or even on a daily basis,” said Yeshidagne. As the United Foodies of Minnesota polished off our meals with Ethiopian coffee and tea, I had a feeling that Fasika would be gaining a few more regulars.

There’s room for you in the United Foodies of the Twin Cities! To join Michelle Tran on her next international restaurant outing in the Twin Cities, e-mail michelle.kansas@gmail.com.